Analysis: The 413 Elephants in the Picnic Grounds… 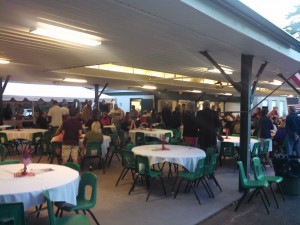 An angle of the WMass GOP picnic about an hour after its scheduled start time. (WMassP&I)

Depending on your perspective, 2014 is either a good year or a less poor than usual one for Western Massachusetts Republicans. On the one hand, there are some pickup opportunities for the party. On the other, for the first time in a long, long, LONG time, the party is actually playing defense in a key race and in another seat they once held for years, it is on the outside looking in.

Last week area Republicans held their annual picnic at the Elks in Springfield. Given the potential for opportunity and Charlie Baker’s real shot at the corner office on Beacon Hill, it was probably not the group therapy session it usually is. But success—for Baker or down ticket GOP—will not come easily.


The full story on the picnic is hard to discern. WMassP&I was turned away at the registration table by a bearded gentlemen sporting a tweed jacket and Reagan/Bush 84 button. He said the event only had so many slots for the press. From the registration table, though, an hour after the event’s posted start time, many tables appeared empty. Robert Rizzuto of The Republican described the scene in Sunday’s paper, which both showed the party’s optimism, but underscored the challenges.

Kirsten Hughes, the Stat e Party Chair since 2013. (via Twitter/@KirstenHughesMA)

Beyond area Republicans, party notable like Rob Eno of Red Mass Group the state party’s chair Kirsten Hughes attended along with much of the statewide ticket below governor.

However, it is the local party that merits a look. The State GOP has a bad habit of acting as a vassals that serve ticket toppers whether Mitt Romney, Scott Brown and, yes, Charlie Baker. As the special election in Westfield showed, the entity boosting the area GOP is not the state organ. Rather the Marlborough Republican City Committee plays stepparent to down ballot candidates and is responsible for much of the spending this cycle on paid canvassers and other support staff for the legislative campaigns.

That could prove essential if fundraising remains anemic for the GOP’s candidates and the gubernatorial election comes down to a squeaker. The biggest disaster for the party would be a wave for Martha Coakley, the Democratic nominee. However unlikely that is, it would all but decimate the 413 GOP’s prospects this year. In such circumstances, only Senator Don Humason could hope to survive if his bulwark of support in Westfield holds.

Although the party filled a full slate for the statewide races this year, below the governor’s race, the action in Western Mass is probably just in the legislative races. Only one is an open race, the 1st Hampden & Hampshire Senate district where Republican Deba Boronski is running. She will face Democrat Eric Lesser and independent Mike Franco running on the America First line in a race that is still gelling. Senator Don Humason of the 2nd Hampden & Hampshire is defending himself against Democrat Patrick Leahy. That race will test both candidates abilities to grow outside their bases of Westfield and Holyoke respectively.

The House races stand apart from the Senate as in all of the former, the GOP is on offense. However, it is not clear that this is the strong signal it could be. Republicans are challenging incumbent Democrats in three districts all of which they either held or contested last time. Westfield City Councilor Allie, whom Rep John Velis defeated in the 4th Hampden’s special election, will try again this November. Nathan Bech is challenging Rep Michael Finn in the West Springfield-anchored 6th Hampden District. Wilbraham Selectman Robert Russell is contesting the Springfield-heavy 12th Hampden, which also includes part of East Longmeadow. He will face Rep. Angelo Puppolo.

While the raw number is the same as 2012, it includes Westfield 4th Hampden, which Velis snatched from the GOP in April’s special election. Two years ago, Humason, then a rep, had no challenge. But this year, the GOP could not field a candidate against Brian Ashe in the 2nd Hampden unlike in the years since Ashe took the seat in 2008.

Rep. John Velis took the Westfield-only seat away from the GOP last April. November is a rematch between him and Allie. (via Facebook/Velis campaign)

However, the strength of this field overall again seems to rest heavily on factors outside of the candidates’ control. From a purely social media perspective, Allie seems to have either hitched his wagon entirely to the repeal of the gas tax indexing or has all but abandoned his bid in favor of boosting that ballot question.

Across the county in the 12th Hampden, Russell’s campaign hit the rocks this summer when Masslive wrote about his bankruptcy. While he said the filing was primarily related to business, not personal finances, it exposed him to broader critiques about fiscal mismanagement, usually the core of any Bay State Republican’s pitch. While a critical hit, this might not normally be a fatal one, but for the blue tint of the district. Many of Springfield’s highest turnout and bluest precincts are in the district, weighing down GOP hopes for the district.

Republicans have noted that Scott Brown did well in the district in 2012, but Brown’s performance is the GOP’s ceiling. Brown was a high-profile, incumbent US Senator who appealed to Dem-leaning centrists. Brown still lost all of the Springfield precincts and simply did not do well enough in Wilbraham. Russell will probably do at least as good as Brown in Wilbraham, but to win this seat everything needs to go right. Already Puppolo has a monstrous cash advantage, while Russell’s fundraising was meager at best. The bankruptcy may have just added to the a necklace of loadstones around Russell’s neck.

Of the three, the monosyllabic matchup west of the river probably has the most action. In his first run for the seat, Finn beat back Gregory Neffinger (who later had an acrimonious stint as mayor of Westside), and the seat has been Democratic since Stephen Buoniconti won it fourteen years ago. Redistricting shored up its reliable Democratic precincts across the river in Chicopee and Springfield. Still, Bech, who ran a longshot campaign for Congress in 2008 against John Olver, has a notable political victory around his belt: the defeat of Hard Rock’s Big E-flavored casino proposal.

But Finn is no pushover and he is getting an assist from an unlikely source: Bech and his allies. Finn came out swinging last week, as many of his Democratic colleagues have, aiming at the Massachusetts Fiscal Alliance for their politicking. The conservative outlet has been mailing voters in many districts—including Puppolo’s—scorecards and flyers decrying reps votes on a number of issues.

However, Mass Fiscal jumped the shark with a new one that condemned reps for accusing reps of supporting illegal immigrants before veterans. Except that did not happen. Rather, reps voted to sustain a ruling of the speaker that an amendment on prioritizing veterans in housing was not germane to the bill on which the amendment was raised. In an epic takedown, David Bernstein outlined not only those facts, but how the Alliance was possibly abusing its 501(c)(4) tax exempt status.

Finn accused Bech of conspiring with Mass Fiscal, which may or may not have been true. However, Bech has not done himself any favors either by lumping Finn in with the probation scandal and corruption on Beacon Hill generally. It is an article of faith that corruption will live on in that city on a hill, but the actual scandal Bech has invoked (and indeed the most recent legislative one) happened before Finn was sworn in. Incidentally, among the first issues facing the House when Finn was sworn in were new reforms of the probation department.

Republicans are nominally on defense in the 3rd Hampden, the Agawam, Granville and Southwick seat. Archconservative Nick Boldyga has another race with Samuel DiSanti, whom Boldyga thoroughly crushed two years ago despite the presidential boost. Boldyga’s views have inflamed the liberal and even some moderate parts of the district. However, DiSanti failed to connect with voters and, some supporters said then, did not heed key advice. Having raised very little money so far, it is hard to see at this point how things would be any different for DiSanti this year.

More will be said about all of these races, especially the senate ones later, but this is, in a nutshell, the state of the down ballot races. No matter what, a necessary if not sufficient condition for success will be Baker delivering. Even a close loss for the leviathan ex-insurance executive could boost the local down ticket. Republicans still need a lot more to actually take any of these seats, though.