WESTFIELD—Politicians abound in Shawn Allyn‘s family, but until this year, it might have been a recessive gene for him. But since joining the race for Hampden County District Attorney, Allyn has evolved from a reserved, somewhat awkward political neophyte to a master of both tone and rhetorical flourish. At the Westfield Women’s Club last week, one of the last events for the DA’s race Allyn, always a bit dramatic—an unsurprising quality for a trial lawyer—ably pushed his platform and defended his own record with vigor.

“I am different person today than I was at the end of December,” Allyn said after the debate, explaining it was a positive, liberating transformation (perhaps a reference to the personal) and one that introduced him to more people.

All of the candidates have improved since the race began, complicating any guess about tomorrow’s outcome. Allyn, Hal Etkin, Anthony Gulluni and Brett Vottero, the latter three all former or current assistant DA’s, are competing for the Democratic nomination for district attorney in Hampden County. With no independents or Republicans filed for the general the primary will effectively decide the election. The seat is open after Mark Mastroianni resigned earlier this year to take his post as a federal judge in the Springfield division of US District Court.

Allyn’s campaign has been successful at consolidating support in some towns including his native Holyoke and in other pockets of the county. Endorsements from MassEquality, the Victory Fund and civil rights figures like Rep. Ben Swan have given him a boost as well 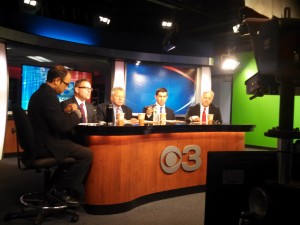 All four candidates with The Republictoan’s Rob Rizzuto at the CBS/Republican/NEPR debate. (WMassP&I)

Despite not being a former or current employee of the DA’s office, outside attorneys have won the post. Former DA William Bennett had not worked in the office before and Allyn, who appears the most liberal candidate in the race, has had extensive trial experience. His platform has emphasized on treatment, not incarceration, for drug cases and reforming the juvenile court, although he has promised a hard line on gun crimes.

Despite a more liberal orientation, Allyn has attracted some significant conservative support. Holyoke City Council President Kevin Jourdain, one of many Holyokers across the city’s traditional divide backing Allyn, but notably a Republican, held a fundraiser for Allyn. Although Jourdain and many of the attendees can not vote for Allyn, their contributions could be just as valuable.

Republicans, like Kevin Jourdain, who cannot vote in the Democratic primary have supported Allyn despite his broadly liberal platform. (via holyoke.org)

“They know my character, know my integrity and they know I’m a good lawyer,” Allyn, who now lives in Agawam, said of his conservative support, which extends beyond his native Holyoke.

After opponent Vottero challenged the other candidates to produce a list of their most significant cases, it proved to be of little difficulty for Allyn. He told WMassP&I that both the Melvin Jones case and the Cynthia Brace cases topped his list. The Jones case arose from a highly publicized video of Melvin Jones suffering an apparent beating at the hands of now-former police officer Jeffrey Asher. It has given Allyn headaches among police, but earned him accolades from civil rights groups.

The case was “a doubled edged sword for me running as DA,” Allyn said. “I knew I would not have police support because of Melvin.”

The Brace case a little bit different as Allyn said, even in defeat, he considered it a victory. Cynthia Brace, an inmate at the jail in Ludlow, died while staff thought she was in the process of detoxing. Allyn brought a federal civil rights suit against the jail and, although unsuccessful, it brought a change in practices. Allyn said that move—taking on Sheriff Michael Ashe—too, was unpopular, although he also indicated the political impact was much smaller.

The Carbone case, however, has caused Allyn trouble. In March, Westfield District Court Judge Philip Conant in a lengthy decision ruled Allyn had improperly taken on the case of Dean Carbone a criminal defendant in a traffic incident. Allyn had previously represented Carbone’s children who were suing the insurance company as part of a claim related to the same accident. The children’s father was technically a defendant, however, the real party at interest was the insurance company.

Nevertheless, Contant ruled Allyn had improperly sought out representation of Carbone creating a conflict between his Carbone children clients and Carbone himself. Allyn claimed the conflict dissipated once the children’s case settled, days before Allyn was appointed Carbone’s lawyer. He asked Contant to reconsider. Conant reaffirmed his earlier ruling in July and removed Allyn from the case, although Allyn can assist Carbone’s new counsel in limited ways. An appeal of Contant’s ruling is planned. 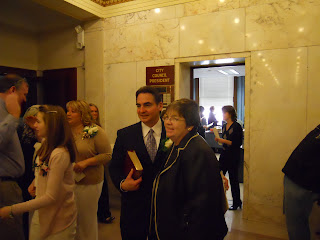 Based on a cursory review of attorneys’ cannon of ethics, Allyn appears to be in the clear, because he had his clients’ consent to the conflict. The issue faded until former Chicopee District Judge Mary Hurley wrote a blistering letter in August trashing Allyn’s behavior, although added nothing to what Conant originally wrote. Allyn responded in print and at the Women’s Club defended his ethics, laying into Hurley for discussing the case of one of her former judicial colleagues. He accused her of considering a run for DA herself, but declined so as not to miss a July 1st salary bump.

During the interview, Allyn said it was “Irresponsible for her to write that,” adding that by commenting on a colleague’s case, Hurley could harm Carbone’s ability to get a fair trial. “No judge would do what she did,” Allyn said firmly.

But while the Hurley letter may have knocked Allyn off balance, it has hardly consumed his campaign since its release. He has continued to pitch his platform at full steam.

Allyn has promised to treat gun offenses harshly, ostensibly to discourage individuals from carrying weapons. He has proposed using the state’s dangerous person hearing to hold off setting bail. Even if the person is ultimately released, he said, “you can set stronger bail conditions.” According to Allyn, similar use of this law has occurred in Plymouth and Suffolk counties.

However, with much of the problem coming from other states, Allyn said there would need to be great collaboration with the US Attorney’s office. Additionally, he suggest the DA’s office hire a full-time grant writer or two to identify and obtain grants to finance more internal operations as well.

The Juvenile Court is based in the H.H. Richardson Courthouse on State Street. (via mass.gov)

In terms of the juvenile court, Allyn was respectful of the ADA currently in charge there, he said too many inexperience lawyers get assigned to that division.

More seasoned prosecutors are needed in order to judge what offenders need immediate diversion, a treatment program or lockup. Asked what caused this “dysfunction” and “fragmentation” in the juvenile court, Allyn did not blame any one factor, but said the county’s high poverty rate strained an already underfunded system. That and too many continuances incrase the recidivism rate, which makes matters worse.

“It is not going to be an easy task, it may take a term a term and a half to see results,” Allyn said bluntly.

Allyn has a background in social work, which may explain the specific focus on the juvenile court. He has seen the system fail first hand and correcting that is something that drives him. With the right attention and care, kids can be kept out of the system and, in particular, out of court.

“I’ve been the guy who’s brought them to court, not as a lawyer, but as a social worker,” he said. “Were not going to fix poverty for kids, but if you open doors…a percentage of kids will not come back in the door.”

Allyn began his professional life as a key worker at the Department of Youth Services and later in other government agencies after getting degrees at Holyoke Community College and Westfield State. He attended Western New England Law School at night and became an attorney at the beginning of last decade. Allyn said he did not come from money and worked his way through all of school, which he said, “molded who I am.”

As a child, Allyn wanted to be a police officer and at HCC got a criminal justice degree. His first gig out of law school was in the Holyoke City Solicitor’s office, but he did not find the work intellectually stimulating.

He also did not care for representing an entity rather than a person, “I had just come from a human resource job where I had nonstop human contact all day.”

As the campaign has worn on, it remains difficult to gauge who will win. The candidates have done more to stand out than tear each other down. For example, even as they still snipe at each other’s foibles, at the Women’s Club debate, a détente had seemingly developed between Allyn and Vottero, both of whom had nice(r) things to say about the other.

After taking a break from practice for the last few months, Allyn seems okay with returning to work. Indeed, he will the day after tomorrow’s primary, win or lose. However, that does not mean he is anything, but committed to the race until the end.

“I’m the right candidate with the right experience to meet the county’s criminal justice needs,” he said. I have a proven track record of doing what’s right, not what’s popular and I’m going to do what’s right for the citizens of Hampden County.”