UPDATED 9/15/14 12:10PM: For clarity as to the other primary candidates not in attendance.

EAST LONGMEADOW—With last Tuesday’s raucous primary over, the campaign office behind the Big Y near the Springfield line again lit up with activity as Eric Lesser and his campaign pivoted to what may be a more hard-fought general election. Saturday morning Governor Deval Patrick rallied Lesser supporters outside the office during a weekend in which Democrats statewide showed off unity with their nominees for governor, lieutenant governor, attorney general and treasurer now set.

Unity was on display at Lesser HQ too. Both Thomas Lachiusa, a Longmeadow therapist, and Aaron Saunders, a Ludlow selectman attended the rally. Lesser also thanked Tim Allen and James “Chip” Harrington—both of whom did not attend—for their campaigns and their participation in the primary.

During the speaking portion of the event, however, Lesser and Saunders embraced and Saunders stood by as Patrick urged supporters to bring Lesser’s message to voters whether Democrat, Republican or independent. Lachiusa left early to attend a Democratic State Committee meeting in Springfield.

The 1st Hampden & Hampshire Senate district consists of about a third of Chicopee and Springfield each as well as Belchertown, East Longmeadow, Granby, Hampden, Longmeadow, Ludlow and Wilbraham. Lesser, a former White House aide and a staffer for the Council of Economic Advisers, faces Republican Debra Boronski, who served half a term on the East Longmeadow Select Board and Michael Franco, an independent running under the America First banner. 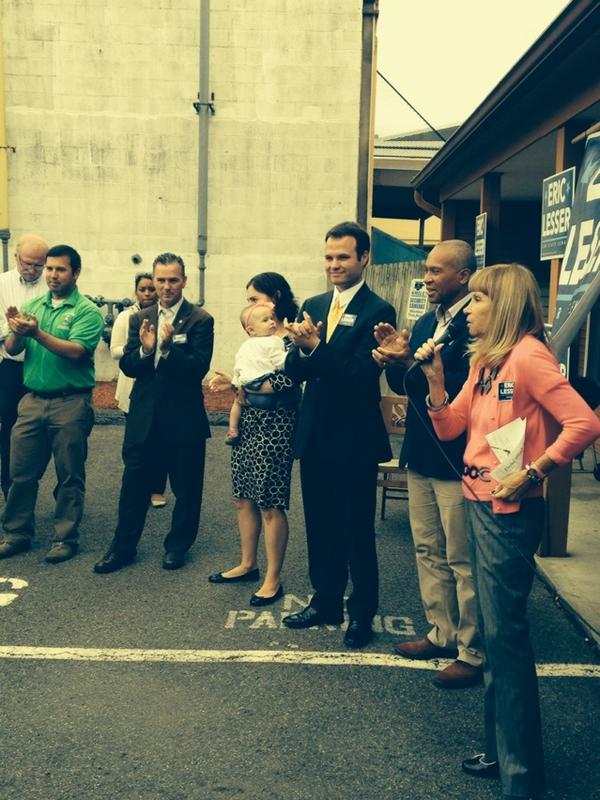 Lesser, who volunteered for Patrick while a longshot candidate for governor eight years ago, looked on as Patrick revved up the crowd and extolled the virtues of the political newcomer. “I hear some of you are nervous,” about the election. “That’s good,” Patrick said in his energetic tone, suggesting that such a concern will encourage supporters to work harder to elect the Longmeadow native.

Indeed, Republican scuttlebutt has already picked up where the primary left off by attacking Lesser’s out of state contributions. However, the impact of such an attack may be limited. Boronski had herself rejected Allen’s “candidate’s pledge” that would have capped money from outside the district. At the time, she emailed WMassP&I a press release that called the issue a “gimmick” and “grandstanding.” The release went on to criticize focusing on that over matters more pertinent to area voters’s lives.

Patrick invoked the ambivalence some Democrats have had about Republican Charlie Barker, the GOP’s gubernatorial nominee, which suggests that he, and for that matter, Boronski would not be that bad. “They have short memories!” the governor exclaimed, noting a lack of educational and regional investment in the area under GOP governors.

“I am a proud Democrat, but I am going to work with anybody, Democrat, Republican or none of the above if they are serious about investing in our communities,” and ensuring Western Mass has a “strong voice.” Lesser said, speaking after Patrick.

United and ready to win in November! Glad to stand with Senate candidate @EricLesser tonight in Longmeadow! pic.twitter.com/gcPZI71WWl

Signs of unity were on view elsewhere last week. Incumbent senator Gale Candaras, who backed Saunders, tweeted a photo of her and Lesser at a Longmeadow Democratic meeting. Candaras, who holds the seat Lesser is seeking, retired to seek the Register of Probate in Hampden County.

Saturday’s event took place amid anticipated shifts in the Lesser campaign. Lee Morrow, who had served as campaign manager since the spring, handed the campaign over to Michael Clark, Longmeadow’s School Committee Vice-Chair. Clark had been Lesser’s Field Director. Morrow always intended, campaign sources say, to return to school this Fall, and with the conclusion of the primary, began classes last week.

Clark, a longtime area politico and Lesser friend, assumes his post as the general election begins and amid decision-making about how and when to sync up with Massachusetts Democrats’ coordinated campaign. Clark said the campaign is mulling the fate of his old post, but he does expect to appoint a new field director.

Other positions, which through the primary were filled on a volunteer basis, are not expected to change at this time.

The transition appears to be seamless. There was no noticeable difference in the campaign’s execution of its rally with Patrick on Saturday. Like prior canvass kickoffs and the get out the vote rallies last weekend, a large crowd pushed the event outside into the parking lot behind the office. Democrats like the governor, are expected to offer what support they can to get Lesser across the finish line.

“This election is about you, your kids, your grandkids, and also the children you don’t know in which you must realize you also have a stake,” Patrick told the crowd. “It’s about building community and building a future. And we’ve got the right nominee.”