Analysis: Solid Win Sets Healey’s Course toward November and Beyond… 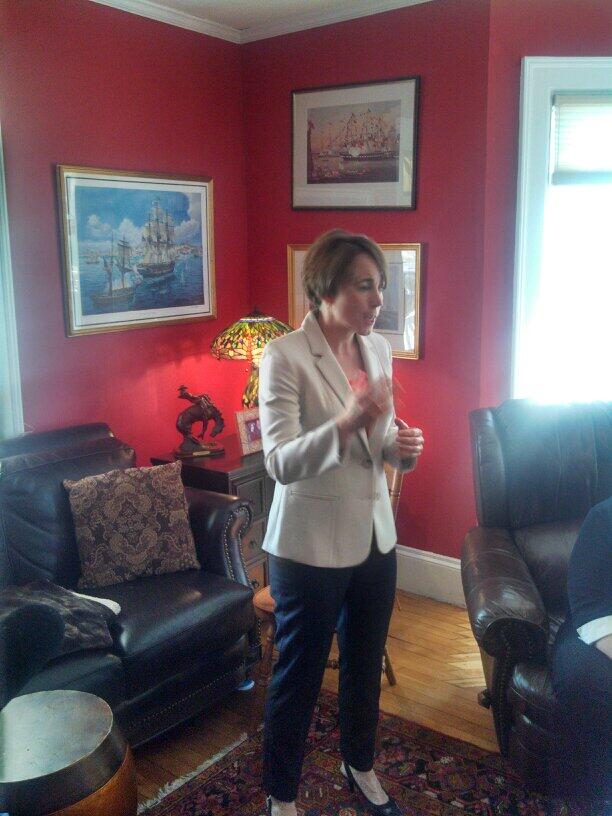 Three weeks ago on primary night in Massachusetts, there were very few complete runaways. Both Martha Coakley and Deb Goldberg won their contests by convincing margins, but neither cracked 43% of the vote. While winning by about 10 points, Seth Moulton tiptoed across 50% to become the Democratic nominee in the Sixth Congressional District. Among the commonwealth’s top tier races, there was only one exception to this pattern of decisive, but not eye-popping wins: Maura Healey.

The former basketball player turned lawyer routed her primary opponent Warren Tolman, a former state senator, by nearly 25 points, a stunning margin for a first time candidate. Earlier this year, most prognosticators had pegged this race as Warren Tolman’s for the taking. With immense labor support and a near endless stream of electeds behind him, Healey seemed set up for a spirited, but near-certain defeat.

Of course that did not happen and it can be traced back to two critical events. When Rep. Harold Naughton dropped out, the race suddenly became a two-way all, but assuring Healey a spot on the ballot at the Democratic convention in June.* While certainly she still could have gotten on the ballot had Naughton stayed in, a one-on-one allowed Healey to draw a sharp contrast as opposed to the trying-to-stand out, a common way to succeed in multi-candidate races.

Healey’s opposition to casinos was another the decisive factor. Again many politicos assumed this would serve as the kiss of death. Many pols feared even considering Healey over Tolman, which might prompt deep-pocketed casino companies or labor came after them. That never happened and only labor played a role in the primary. Indeed, at least a few pols that publicly backed Tolman privately confided that they voted for Healey. However, the casino issue more broadly gave Healey the spotlight, which she ably used to talk about all manner of other issues.

Tellingly, the race still flew below the radar for months between the convention and the primary. Tolman went up on TV sooner and more frequently than Healey, but polls still barely registered a reaction. Polls are not necessarily an indication of much, but outlandishly high undecided/don’t know numbers typically bear out, especially for a race that does not top the ticket. They remained stubbornly high until Healey put up her ad.

Very likely, voters identified with Healey’s message of professionalism for the attorney general’s office. Whatever people may feel about Martha Coakley as a gubernatorial candidate, they still appear to broadly applaud her AG administration. Installing someone who has experience running parts of the office, while also distinguishing herself from the incumbent AG very likely appealed to voters. Healey’s commercial made this qualification of hers abundantly clear.

The margin does not do Healey’s win justice. She won 347 out of 351 communities in Massachusetts, including major cities like Springfield and Boston. In both Tolman had high-profile backing from nearly the entire political establishment (in Springfield’s case) or a new mayor (“Mahty” in Boston’s case), who had won his election last year by forming an impressive coalition that cut across the city’s many strata.

The yellow are the town Healey won. (via Blue Mass Group & AP)

The win leaves Healey in a powerful position going into the general election. Her Republican opponent, a corporate attorney that represents parties that may have business before the state, had to lend himself $100,000 after a primary in which he ran unopposed. Healey has consistently outpaced expectations of fundraising. Thus it is unlikely she would need to resort to such measures.

Despite some hard feelings during the primary, these do not appear to be a problem in the long term for Healey. She emerged from the primary arguably the most popular figure in the party aside from Senator Elizabeth Warren. Already, wounds from the primary appear to be on the mend and some Tolman backers are actively seeking to build bridges. Indeed, the AFL-CIO, headed by Tolman’s brother, endorsed Healey shortly after the primary.

Healey may become one of Coakley’s biggest champions on the campaign trail, too. Already Healey has appeared with the current attorney general and Steve Kerrigan, Coakley’s Democratic running mate at numerous events. The consolidated and enthusiastic women and LGBT vote for Healey can only benefit Coakley.

At the same time, whatever party unity is underway, Healey also goes into the office with the very independence she touted in the campaign. Miller is lobbing half-hearted claims that only he, a partner at a law firm that specializes in lobbying, can fight corruption. Overcoming the opposition of a solid majority of Beacon Hill on your way to an independent constitutional office seems like a much stronger credential.

And Maura Healey has that going into a general election.

*Western Mass Politics & Insight Editor-in-Chief Matt Szafranski has organized events for Maura Healey and served as a convention whip for her at the state Democratic convention in June.