Briefings: A Chance to See Elizabeth Warren for Lesser… 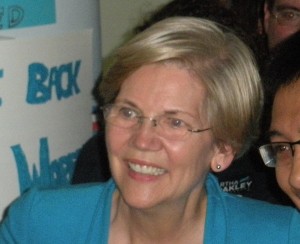 As Election Day draws near, political campaigns begin to switch over from traditional campaigning to get out the vote (GOTV) efforts. In Massachusetts, Democratic candidates in particular have a full stable of surrogates and big names to rally the troops and keep up momentum heading into E-Day. Depending on the style and nature of the campaign, this can and does include big names boosting state legislative candidates as well.

Already Eric Lesser, the former White House aide turned Democratic state senate nominee, had Governor Deval Patrick and former First Lady Kitty Dukakis to help out. Democratic Attorney General nominee Maura Healey is scheduled to kickoff a GOTV event for Lesser on Saturday, but quite possibly the commonwealth’s highest profile and by some estimates most popular politician will be on hand the next day. Sources close the campaign say Senator Elizabeth Warren will greet Lesser supporters Sunday morning at the campaign’s East Longmeadow office.

Warren was already scheduled to appear at a rally with Congressman Richard Neal and Martha Coakley the night before in Springfield. Warren had been barnstorming the commonwealth stumping on behalf of Coakley as well as Healey, other statewide Democratic candidates and Sixth Congressional district nominee Seth Moulton. Warren’s stop at Lesser’s East Longmeadow campaign office this Sunday would mark her first stop for a Western Mass candidate for the legislature.

Lesser began law school during Warren’s last semester at Harvard Law, thus it is unclear if she taught a class of his. The course she taught was offered to first year law students, though. The Harvard Law community in general was a key base of support for Warren. The two almost definitely crossed paths either via the Law School or her US Senate campaign, for which Lesser is said to have volunteered.

Warren has stumped for prominent law students of hers including Joe Kennedy III, now a congressman, and Michelle Wu, a former Warren campaign staffer who successfully ran for Boston City Council.

Because Warren’s visit comes in the middle of GOTV, it could pay dividends for both Lesser and the whole Democratic ticket encouraging turnout. This could be helpful in Springfield, which, of all of the communities in Lesser’s district, suffers among the higher turnout drop off in midterm elections.

Warren is expected to arrive at the Lesser campaign office on Harkness Avenue in East Longmeadow at about 11 a.m on Sunday.