Endorsements on Parade: The Best (Wo)man for the Job, Coakley…

A Democratic Attorney General principally facing off against a ideologically inoffensive Republican. It could be nearly five years ago. Dig deeper, though, and it becomes patently obvious that this is not the same race.

Martha Coakley, the Democratic nominee for governor, has leaned into this race far more than she apparently did when she fell to Scott Brown in the 2010 special US Senate election. In short, Coakley has been no slouch in this campaign. More important she has been a workhorse in the attorney general’s office. The values she has brought to that office make her the best choice for governor.

But why not the other candidates?

Scott Lively, the candidate from Springfield of all places…no. Really, need we say more? Lively, a pastor, is simply unacceptable. It is neither his libertarianism nor his Christianity that are disqualifying. Rather it is the intolerance he divines from both that disgusts us. Being a non-human entity and technically ineligible for salvation, this blog cannot comment about what God thinks, but the humans behind us cannot fathom a God blessing this worldview. 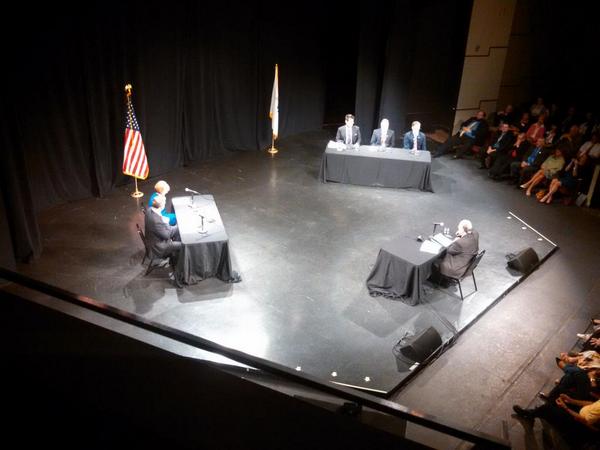 The three independent candidates at top. The alphabet sentenced them there. (WMassP&I)

Jeff McCormick, also an independent candidate, has tried to style himself as an alternative to Republican Charlie Baker. He has generally tried to stay fiscally conservative and socially liberal. However, we simply have not seen much in the way of policy to distinguish himself meaningfully from the frontrunners.

United Independent Evan Falchuk sounded quite ambitious in many settings. However, despite spending big out of his own pocket, the public never seemed to take his candidacy seriously. Perhaps Falchuck has been shortchanged by the media. Certainly Falchuck is an intriguing figure and has offered a bit more of a progressive slant at times, but in terms that could appeal to conservatives as well. In the end, like McCormick’s, his pitch differs insufficiently to raise him above “other.” While we understand his frustration, we cannot pretend to not be put off by his combative approach to the media’s snub.

Then there is of course the Republican Baker. Much of Baker’s campaign appears to be an aggressive charm offensive combined with a negative air war against Coakley funded by third-party groups. While Baker has moderated himself from some of the tea party positions he held in 2010, his policy prescriptions and proposals show startling lack of detail and, very often relevance. It seems like his campaign’s raison d’etre is to ensure that out of work Massachusetts GOP operatives can secure their place at the government teat.

Baker’s plan for jobs is a milquetoast Republican platform mostly confined to limited taxation. Indeed, Baker proposes almost nothing about tax policy except that he will not raise taxes, which the legislature has already show reluctance to do. Even if lower taxes meant more jobs, there must be companion policies. Baker has few. But worry not. He includes welfare reform as part of economic development. Funny, nearly all of his welfare ideas have been enacted—by a Democratic governor and legislature.

Baker’s pitch of managerial experience is at best irrelevant and at worst lame. Certainly we disapprove of the way Baker righted Harvard Pilgrim’s ship, but even that aside, what does it prove? He can run an insurance company, which is totally unlike government. His service in government is nothing to tout or hardly due to his leadership.

We must consider also our home, Springfield, among the places where Baker has executed his greatest sleight of hand. Baker, mostly relying on the air war to reach undecideds, has turned to the cities. He has held an inordinate number of events in Boston for a Republican. He has tried to do the same in Springfield, although with debatable success.

But Baker’s trips here have only been an appeal to one side of the city, often the one reluctant to accept the other side while being paralyzed by nostalgia. The result is pretty pictures of Baker visiting Springfield. But posing at the Puerto Rico bakery does not suggest he understands the city’s needs and dynamics or has any policy, other than casinos, to boost Springfield’s fortunes.

Finally, his selection of Karyn Polito is itself disqualifying. Ever since he made her his running mate, Polito has largely hidden under the bed, a name and a campaign account able to collect another $500 check. The reason is obvious. Not even Baker’s transformation from the mean Charlie of 2010 matches the scale of etch-a-sketching of Polito’s record on gay rights and scorn for the poor.

Coakley couldn’t be more different. We declined to endorse her for the primary because of a lack of specificity in her platform, but not only has her proposed governorship come into focus, it succeeds exactly where Baker’s fails. She has also learned the lessons of 2010 well.

Coakley may no longer live in Western Mass, but she gets the East-West disconnect, or more accurately the beyond 495 disconnect. The proposal to invest money infrastructure projects particularly outside that outer belt is exactly the kind of thing of which we do not get enough. We would like to see more than half a billion, frankly, but it is a worthy start.

Beyond such programs, we know she knows this area and our city in particular. Her interest in our issue are not cynical or merely traded for something else to win higher office. Springfield will be in good hands with her at the commonwealth’s helm.

There is also that commitment to look out for those who need a hero. Tipped workers, homeowners, victims of human trafficking. The list goes on. Coakley may not blow the walls off buildings like Elizabeth Warren, but she has it where it counts in compassion and commitment. That attitude, we know, will be applied in the governor’s office.

The anthem of her campaign has been fairness and equality, and among the commonwealth’s most vulnerable citizens–we have more than a few in Springfield–that message is needed more than ever. We would prefer Coakley embrace options to provide for more tax equity, but there are plenty of legislative and administrative options, too. Combined with her thoroughness and attention to detail, we believe she will wield these tools well.

And if we are to talk management, a theme Coakley has not played up enough has been her administration of the attorney general’s office. As she told us, Coakley has run a tight ship there and her office has won back millions for the commonwealth in the process. Those are managerial results.

While Coakley did not pick select him directly, her running mate, Steve Kerrigan has long served the public good, often without thought of reward or praise. True, we did not endorse Kerrigan in the primary either, but it was not because he could not serve the office well. To the contrary, particularly in attitude, he personifies the best of public service.

The choice for us is obvious. Martha Coakley is the superior candidate for governor, both for our city and our commonwealth this Tuesday November 4.