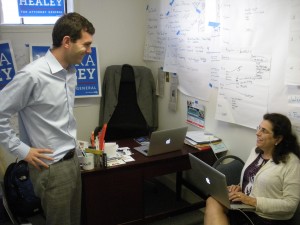 Mike Firestone in the Healey campaign office with staff member Diane Masters, another Warren alum Firestone brought on board. (WMassP&I)

SOMERVILLE—After a decade in the middle of some of the highest profile campaigns of the last few cycles, the public may know very little about Mike Firestone. As the campaign manager for Maura Healey, the upstart attorney general candidate who won the Democratic primary last month, his most public appearance may be the embrace between him and his candidate at Healey’s victory party.

Among Democratic politicos and activists, he is known as a hard-charging, determined operative able to impress with the most mundane of campaign functions. One party official recalled being blown away by an email Firestone had blasted out to supporters, when Healey’s fate was uncertain. “He does not lose!” the official remembered thinking.

In Maura Healey’s case, not only did he not lose, Firestone led Healey to a 25 point romp over Warren Tolman.

“We always had a clear vision. That’s the most powerful thing you can have in a campaign.” Firestone said. “A really firm conviction about what this race is about for her.”

The Brookline native has over the course of ten years racked up an impressive resume of wins, mostly as a field director, but the Healey campaign offered him a chance to lead the whole endeavor. The nimble, energized campaign seemingly mirrored Firestone’s own reputation for frenetic campaigning. 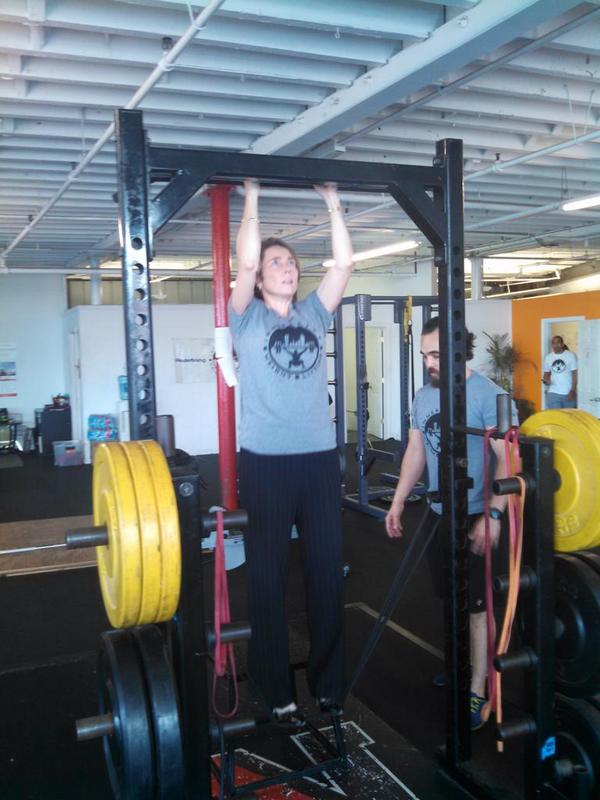 Maura Healey, pictured here at Innercity Weightlifting, is hardly an orthodox candidate herself. A former pro basketball player, her campaign has woven that aspect of her life with her platform almost seamlessly. (WMassP&I)

After a stop at InnerCity Weightlifting which included a brief workout of pushups and pull-ups—in heels no less—Healey noted the match between a first time candidate and a first time campaign manager.

“I knew Mike had terrific field experience. I knew he was fired up and could fire others up,” she said. “That’s the kind [of person] needed to have a chance in this election.”

Dylan Fernandes, a former Warren field organizer under Firestone and now managing political and field operations for Healey, added that his boss was adept at creative messaging. During call-a-thons to gain supporters, Fernandes recalled Firestone sometimes had Healey on hand to talk to firm undecideds.

Firestone, 31, a graduate of Harvard College and Law School formally signed onto Healey’s campaign in January even as the campaign was still staffing up and many duties fell on him. He was still scheduled to take the bar exam in February.

“That was a really tough time,” Firestone said. “But I got through it. They say you’re aiming for a point above failing on the bar exam.”

Firestone remembers reading a Boston Globe article about Healey’s campaign before ever meeting her. “I had read the announcement story, and said when I read it, ‘Maura Healey should absolutely be our next attorney general.’” He soon would have a major role in that effort.

“A friend of mine recommended that I get in touch with this person Mike Firestone,” Healey said, “he was in law school, really busy, but he might have some time and might be interested in a campaign like mine.” 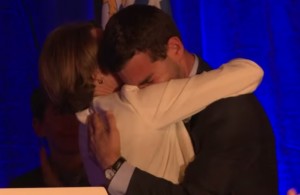 Mike Firestone and Healey embrace on primary night after Healey called him to the stage. (via Youtube/Healey campaign)

After chatting, they found they shared many of the same values, “He took a chance on me and I took a chance on him.” Healey said Firestone built an amazing campaign staff and volunteers corp.

Firestone drew heavily from Warren colleagues to fill out Healey’s staff. But there was more than just people that Firestone took from Warren’s historic victory in 2012.

Over lunch, Firestone described the experiences he applied to Healey’s bid for attorney general. He called the transition to campaign manager easy because whether you manage field, political relations, social media or the press, “All of us are in the message business.”

Firestone said Mindy Myers, Warren’s Campaign Manager and now Chief of Staff, asked the leaders of that campaign’s different operations to work together and make decisions collaboratively. “That was a campaign where everyone said ‘how can I help?’ not ‘that’s not my job’”

Friends and former staffers that have worked for Firestone describe him as sharp and witty, but also effective and manic, fitting well with the grassroots campaigns he has run. Engaging, but relentless. Diplomatic, but able to break off a conversation quickly to stay on schedule.

Deborah Shah, Western Massachusetts field director for Healey’s campaign, first met Firestone working on Gov. Deval Patrick’s first run. After she left the helm of Progressive Massachusetts, both Firestone and the Don Berwick camp were lobbying her to join their campaigns.

“Mike was quicker, more persistent,” Shah said. She and others affectionately call him “Fireball.” “With Mike, you’re going to work 20 times as hard and he sets a good example.”

Firestone said he learned the value of working from the ground up from his grandmother, a housing activist in the Brighton section of Boston. She “really believed in the power of organizing at the neighborhood level, strengthening the community and improving people’s lives,” he said. In law school, Firestone echoed his grandmother’s activism spending time working on consumer and financial protection issues.

Firestone with the two US senators he’s helped elect, Jeanne Shaheen and Elizabeth Warren. (via Facebook/non-campaign)

While in college he worked as an organizer for Jeanne Shaheen’s first unsuccessful campaign for US Senate in 2002. Firestone would go back to work for Shaheen during her successful rematch in 2008 and stayed on as her legislative aide for a time. Between Granite State forays he worked for John Kerry’s presidential campaign, Patrick’s gubernatorial campaign and Hillary Clinton’s presidential run.

Eric Lesser, a candidate for State Senate in Western Massachusetts, got to know Firestone as one of the leaders of the Harvard Democrats. Their friendship endured despite being on opposite sides of the 2008 president race and they attended Harvard Law the same time. Lesser was not surprised at the results in the primary.

“Mike deserves a lot of credit for the organization,” Lesser said. Healey, Lesser continued, was a fantastic candidate and just the latest of the next generation of female politicians Firestone had worked to elect.

Since winning the primary, Healey has become one of Martha Coakley’s best surrogates on the campaign trail. (via Facebook/Healey campaign)

Others, including the Coakley campaign, have picked up on this. Like Healey, who has become one of her former boss’s most important surrogates, Firestone is an asset to Democrats’ quest to hang on to the governor’s office.

Sitting in a conference room at Coakley HQ, several interns gathered around their computers with several more linked into the conversation via Adobe Connect. The interns listened intently as Firestone discussed, at times Socratically, the goals, time management and methods of grassroots organizing.

“The organizers and the interns are always the same age, I keep getting older,” Firestone later joked.

But before the primary, before Firestone and Healey were in demand, the long days (he was essentially on call 24/7) and political inertia could be discouraging.

“There were moments you say, ‘My God does anybody care what we’re doing,’” Firestone said. Healey’s whole staff is a fraction of the number of field organizers Firestone managed for Warren.

“But you know on the margins it makes a difference every day.” Without it and a terrific candidate like Healey and great staff and supporters, he said he could not imagine nearly tying at the convention, raising the money needed to get her message out on TV or gaining The Boston Globe endorsement.

Firestone notes, as important as advertising, policy or fundraising is—and certainly was for Healey—they are not paramount. For those interested in following a path of field organizer to campaign manager, Firestone recommends: “Start with opportunities where you can interact with volunteers and voters.” Being a field organizer is the ideal starting point.

“Our business is not just about polling and reporters and fancy fundraisers,” he said. “It is about people. Having that as a background will keep you grounded.”

That focus on people manifests itself on the trail. Very often Healey’s events have reflected that from compelling meetings about injustice among communities of color at the Springfield Public Library to the event at InnerCity Weightlifting. Lighthearted tweets and pictures of Healey’s ad hoc workout aside, the power of that event took place moments before.

Seated next to former Boston police commissioner Ed Davis and a dozen or so young men in the program, Healey listened as they told their stories about getting away from the trouble and gangs on the street, often tired of the cycle of jail, release, crime and too often death. Innercity Weightlifting’s founder, Jon Feinman, then explained how the program set the young men up as fitness trainers for professionals in tech and finance. The clients could in turn mentor and/or connect their instructors with further opportunities.

“Events like this where people are just living their lives and doing their thing,” she said, “this is when you get to make real those words that are just on a piece of paper.”

Firestone, who plans to stay at the intersection of law, politics and policy, said he made a decision some time ago to support progressive candidates, often women, wherever possible.

“If people with the kind of background I have don’t get involved in those tough fights, we will never change the face of our politics,” he said. “We will not change the style of representation.”

By upending the commonwealth’s political norms, Healey and Firestone may have already changed quite a bit.