What The House Results in Springfield Represent… 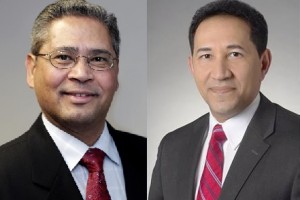 Jose Tosado (left) and Carlos Gonzalez are (in all likelihood) going to the State House. (via Facebook/Tosado & Gonzalez campaigns)

Barring an earthshattering upset, it is all but certain that Springfield will send two Latino representatives to Boston come January. One of them, Carlos Gonzalez, will replace Cheryl Coakley-Rivera, in the 10th Hampden, which, due to encompassment of the North End has been pegged as the city’s Latino seat. The other, the 9th Hampden, will in all likelihood be Jose Tosado, the one-time City Council President, who would succeed Sean Curran.

Just as last year when armchair analysts divined the meaning of municipal election to be politics catching up with demographics, it is possible to miss the underlying currents in these races as well. Yes, there is demographic reality in these results, but they were not the determinative factor. Still, the implications go far and wide.

The two seats are essentially Springfield seats through and through. The 9th Hampden runs from Atwater Park encompassing Bay State Medical Center as it runs to 16 Acres via East Springfield and Pine Point. A nominal Chicopee precinct caps the district. The 10th Hampden hugs the western edge of the city to include the North End, Downtown, the South End and Forest Park’s historic district, and in the time Coakley-Rivera held it became the most Hispanic district in the city

It is worth noting that Gonzalez’s win itself, surprised many, including this blog. Gonzalez fundraising was meager through the August 22 reporting period and reported little spending. His splitting a North End power base with Ivette Hernandez was supposed to cripple him to either Melvin Edwards’s benefit or Hernandez’s whose boots on the ground could compensate elsewhere.

That did not happen. Needless to say it has provoked unconfirmed and thus unrepeatable accusations. Notably, the Secretary of the Commonwealth has received no complaints about the election. Even among politicos who might be described as, um, let’s say skeptics of Gonzalez, few believe anything untoward happened. Gonzalez, having been plugged into local politics for years knows a lot of people. For that very reason, the same politico admit they thought Gonzalez would lose. Others say Gonzalez campaigned extremely hard.

Forest Park went for Gonzalez, but it probably did not have to go that way. (via Facebook/FPCA)

But in hindsight, it is easy to see how Gonzalez won. He outperformed Hernandez in the North End and Edwards greatly underperformed in Forest Park while being weakened by poor turnout in his own Ward 3. Gonzalez likely had better connections to the few more affluent precincts like those in Forest Park, whose ward he won, if narrowly. Hernandez could have won these progressive-leaning areas, too, but, probably underinvested there relative to elsewhere in the district.

The point is that while Latinos dominate in the district numerically, non-ethnic factors decided the winner among the three minority candidates. This is a critical point when navel gazers overemphasize the power of identity politics. This is just as true regarding for Tosado, if not more so.

During the campaign, both Ed Collins and Peter Murphy took pains to dismiss the impact of identity politics as they sought the historic arch-Democratic seat that includes the Irish political heart of Springfield. While Tosado acknowledged seeing more Latino voters in the district, he did not appear to rely on them on them a as base, especially in a low turnout primary. The last few times he ran for City Council, Tosado was the top vote getter, a feat one cannot attribute to identity politics considering the typical complexion of the city’s municipal electorate.

Our Lady of Hope Church, now closed, served the Irish political heart of Springfield of Hungry Hill, and at one time, the 9th Hampden and its East Springfield predecessor districts. (via valleyadvocate.com)

It is probably true the ancestrally Hibernian Collins and Murphy split some of the vote among the lowest of low-information voters. Yet, the fact is Tosado—while losing badly to Domenic Sarno in 2011—had built up a solid reputation among voting blocs across the city and in particular 16 Acres which has been his home for 35 years. If anything served as his base in this year’s primary, it was his neighborhood. He won decisively in Ward 7’s 16 Acres and Outer Belt precincts, underscoring his strength was based in either simple name recognition or a more nuanced respect for his public service.

The nominees’ race is of debatable consequence, but electing these two in particular may reverberate within the Latino community. More pertinently, the results could presage a fairer, broader integration of that community into the city’s overall political and civic culture.

Since this blog reviewed the factions within Springfield’s Latino community, considerable upheavals now threaten that balance of power. The vultures and less ignominious bird of prey are circling some of the most prominent Latino leaders. Should those empires fall, who fills the void could influence not only Springfield Hispanics’ political standing, but the city itself, too.

Some believe changes in policy on Beacon Hill, which though funding influences outcomes in Springfield, could make a big difference to the city’s Latino community. (WMassP&I)

This is about more than politics, though. Depending on who ascends there may be a change to refocus policy to reverse or at least stem decades of stagnation and poverty in these communities. Contrary to politically incorrect conventional wisdom, the problem is far more one of policy than culture.

While both Gonzalez and Tosado on some level represent a prior generation, they could not have more different outlooks and therein lies the key. Gonzalez leans conservative, perhaps a consequence of his time heading the Latino Chamber of Commerce. Tosado has established some progressive credentials after a career in the Department of Mental Health.

Gonzalez, identified as part of the Herbie Flores/New North axis or at least that ilk, preferred to gloss over the Latino factions and focus on Springfield, as a whole not any one community. Neither as a citywide nor now as a rep pol, did Tosado represent an overwhelmingly Latino constituency and as such he has always sought to appeal to voters as broadly as possible. Still, he acknowledges and has always been acutely aware of  the schisms among the city’s Latinos. Tosado is usually pegged to the North End merchant class, many of whom today live across the city, but he has ties with other factions, too.

Tosado has actively mentored and supported the next generation of political leaders, both Latino and not. This is not to say Gonzalez never has, but the factions of the Latino community with which he is closest are known to treat up and comers as threats rather than generation next.

It remains difficult to know exactly what Gonzalez and Tosado’s first term will look like. While there are going to be several freshman reps from across the state in 2015, little about either new Springfield rep will have the effect of overcoming their immediate lack of seniority.

Gonzalez has said his connection on Beacon Hill could override that, but really forming new relationships is the key, something with which Tosado should have few troubles. Aaron Vega, who was the only freshman rep from Western Mass at the beginning of the current term, quickly formed bonds with colleagues, which arguably made for a successful first term.

Closer to home, parallels with Vega are shakier. The one-time Holyoke councilor is among the leaders of a citywide civic and political coalition there. Neither Gonzalez nor Tosado can claim the same in Springfield…yet. How they perform their duties in this term and those thereafter could change things. Again, more importantly, it could set the stage for those who follow and who those successors will be.