Analysis: Searching for Salvation on Surrey Road & Beyond…

SPRINGFIELD—Pulling into the parking lot of St Anthony’s Church and its connected Ceders Banquet hall, even in the dark of night, a ghastly void hangs in the background. The 2011 tornado that ripped through affluent East Forest Park neighborhood did not lay waste to any of the immediate vicinity. Yet, the once treed backdrop, something many of the city’s leafier neighborhoods have, is gone, a fitting reminder as allies of the nearby Cathedral High rallied to save and return the school to its home at Surrey Road last Thursday.

However, as some have observed it is not the tornado that truly posed the biggest existential threat to the city’s only Catholic high school. The Roman Catholic Diocese of Springfield’s new bishop, Mitchell Rozanski, has put the brakes on rebuilding the school, prompting fears the Diocese will reverse its earlier promises. A coalition of alumni, parents of students past and present and stakeholders in the East Forest Park area, led in part by several of the city and region’s leading political figures. Cathedral High School circa opening in 1959 (via Google image search/ancestry.com)

That does not excuse the Diocese’s 180 on the subject. Rozanski may be unfamiliar with the Springfield Diocese’s perhaps less than ideal level of trust it enjoys with its flock, particularly as it pertains to non-religious matters. While Catholics everywhere may have fled or split with the church on issues, in the Springfield Diocese, a decided lack of communication and outreach on the secular and administrative matters have rankled Catholics here even more.

That lack of trust has in the past prompted action from political leaders, many with deep ties to Catholic education. When the Diocese closed Our Lady of Hope, the historical mother church of the city’s Irish population, and announced the same for Indian Orchard’s Immaculate Conception, supporters of the parishes turned to City Hall to erect historic preservation districts around the buildings. 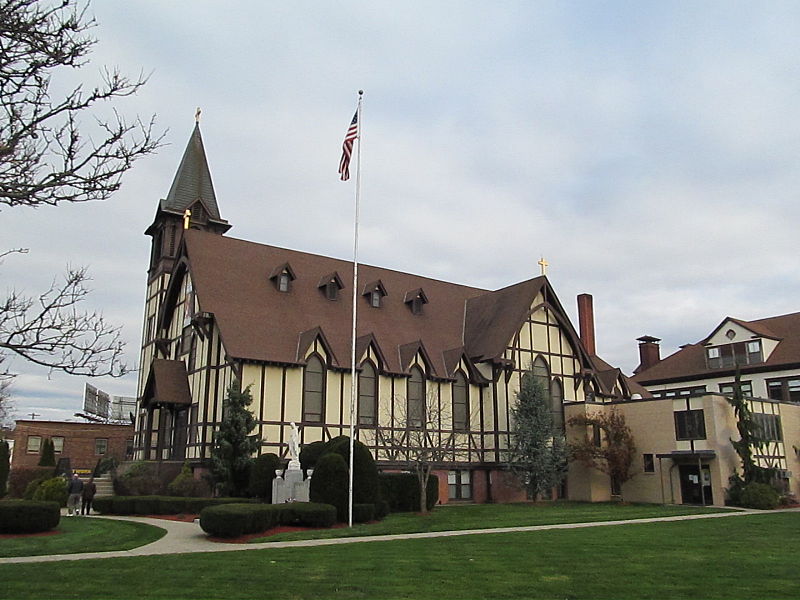 The closure of Our Lady of Hope hurt, but it did not provoke the same sense of betrayal as the proposed closure of Immaculate Conception, from which the Diocese ultimately stepped away. (via wikipedia)

The fear, as evidenced by the demolition of St. Joseph’s Church, was that Our Lady of Hope and Immaculate Conception would be sold and replaced by architecturally significant structures like yet more CVS’s. The Diocese fought the designation until a federal appeals court said they were not, on their face, a violation of the Catholic Church’s free exercise of religion.

Our Lady of Hope’s closure surprised few, who saw the writing on the wall in the form of church attendance. By comparison Immaculate Conception’s slated closure—despite little debt and recent capital improvements—was seen as an act of betrayal, even to the parish’s priest at the time. Parishioners pushed back and Bishop Timothy McDonnell, Rozanski’s predecessor, allowed the church to stay open.

Rozanski is too new and not a product of the Diocese’s inner circle to fairly assign motive to his actions. However, he is probably relying on the same circle whose advice which, in the eyes of many Western Mass Catholics anyway, has heightened the Diocese’s reputation for opacity and intrigue. His Excellency, Bishop Mitchell Rozanski. New the area, Rozanski both may not have appreciated the visceral reaction to a threat to Cathedral, but also not see the lack of trust the Diocese has developed on secular matters that affect the flock. (via wamc.org)

Given this history, it is no surprise Cathedralites think the Diocese might take the insurance money and run. Rumors abound about the Diocese’s debts while having no money for retired priests’ healthcare. The Diocese would need to return FEMA money, but the property insurance could go a long way.

While the church’s lack of transparency fuels the worst thinking, it is just as possible that this comes down to a disagreement about fundraising for the tuition fund the Diocese always said upon which rebuilding was contingent. Supporters and the Diocese seemingly have vastly different impressions about where that fund is. At first glance, the dispute centers on pledges vs. cash in hand.

The Diocese has made no secret of its desire to get out of subsidizing Catholic education. Hit by declining church attendance, the higher costs of lay personnel (particularly in the schools) and the fallout of the sex abuse scandal, something had to give. However, the Springfield Diocese has thus far failed to find or at least settle on a formula to make the school and tuition sustainable as Cathedral’s counterparts in the Boston, Hartford and Worcester archdioceses/dioceses have.

A central problem for Cathedral over the years has been tuition remains too high a barrier both for Springfield residents and even suburban ones who would shell out money to send their kids to the school. Perhaps a more forthright approach from the diocese on a host of issues might have helped, but the condition of the regional economy has political roots.

A better economic matrix in the area would allow more families to afford the school, but also provide a broader pool of alumni donors to sustain its needs over the long haul. For too long, the city’s political establishment has failed to revive the city economy. The rather naked irony is that the part of the problem has been a consistent failure to provide or pursue economic policy that benefits all.

Make no mistake. No city councilor opposed resolves in favor of rebuilding Cathedral and very likely none would. But for ward councilors far away from East Forest Park, the rebuilding is far less their fight. Their kids and families mostly attend city schools. While this may not always apply to the councilors themselves, their constituents too often have been left behind by city and regional economic policy. Had they not been forgotten, they might have had the financial resources to become the backbone of Cathedral’s next generation of students.

Cathedral gets its name from its former location near the seat of the Diocese, St. Michael’s Cathedral on State Street. (via wikipedia)

One should not paint all city politicians with such a broad political brush. Some have not been in power long enough to fairly blame. Others have been working earnestly for decades with some success. Others have been flatly perpetuating the status quo. Political blame is not key on this issue, but both the band of Cathedral supporters and their political allies must recognize that Cathedral’s predicament, the Diocese’s role notwithstanding, is really another symptom of the city and region’s malaise.

Rozanski would do well to heed the voice of his flock and have Cathedral rebuilt, provided both sides agree on the metric of the tuition fund’s success. Anything less would be a betrayal that would wound the city, the church and the cause of Catholic education, whether funded by the diocese or not. However, the bishop would also do well to be frank and transparent about the Diocese’s finances overall. Doing so years ago might have spurred this type of movement or even removing Cathedral from diocesan control years ago, as some have proposed to do now.

Supporters, meanwhile, must be able to back their commitments with actions, while also understanding this problem is far bigger than a school on Surrey Road at eye of storm—manmade or otherwise.