Briefings: It’s Official. Round 4 in Ward 8… 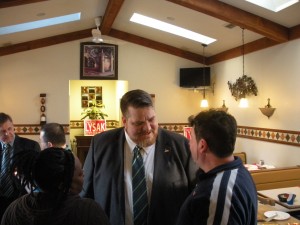 John Lysak jumps back into the political fray. (WMassP&I)

SPRINGFIELD—Following his defeat in 2013 at the hands of his longtime rival, Orlando Ramos, it was quite possible John Lysak would not seek to take back the seat he had held since 2010. Yet, after three similarly casted elections, two of which he did win, another Lysak bid for 36 Court Street would not have been a surprise either.

Tuesday evening the latter won out. Surrounded by family and supporters, Lysak in his trademark gusto, officially launched his comeback and along with it, the latest chapter in the battle to represent the city’s varied, northeastern neighborhoods.

“I’m back, everyone,” he told the crowd filling the seating area of Siano’s, a Boston Road pizzeria not far from the Eastfield Mall. “Now the only question is, ‘did you guys miss me?’”

Although private life had afforded him more free time, Lysak told supporters the draw of public service and helping people led him to exit political retirement and seek his old seat once again. 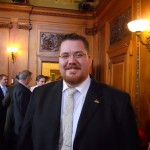 Depending on perspective, Lysak developed a reputation for being outspoken—or uncensored—often willing to break the Fourth Wall of the city’s political Kabuki theater. On policy, he fought the biomass plant slated for his ward, advocated for historic preservation of Indian Orchard’s Immaculate Conception Church and clashed with landlords over efforts tax large multi-family dwellings at a higher rate.

But despite his blunt manner—or perhaps because of it—Lysak also formed friendships on the Council. Former councilor and now state Rep Jose Tosado, unable to attend due to budget votes in Boston, sent aide Ernesto Cruz to read a statement of support. Ward 3 Councilor Melvin Edwards gave a rousing speech in support his “friend and former colleague” that prompted the candidate to half-joke Edwards had stolen the show.

Reached for comment on Lysak’s kickoff, Councilor Ramos said in a statement he was concentrating the “important issues coming before the City Council this year.” He continued, “that’s where I will focus my time and energy.”

In an interview, Lysak while praising the city’s big coming attractions like the casino and the railcar facility, also asked rhetorically what was in store for Pine Point, Boston Road and the Orchard.

Citing the owner of Siano’s, who renovated that building and several adjacent ones along Boston Road, Lysak said business owners were trying to make a go of it in the city, but could use help from City Hall for façade and sign improvements.

“We need to be a little more aggressive,” supporting such entrepreneurs, he said. Perhaps in a nod to the city’s lagging efforts to develop modern, urban streetscapes, he said the city needs to “invest in more great corridors” like Main Street in Indian Orchard and those in Pine Point.

Of his decision to run for his old seat again, Lysak explained it came after discussion with his family, but also former constituents and local business owners. Many, he said, wanted to see him back on the Council. “We are trying one more time,” Lysak said.