Editorial: We Have the Body, No Need to Execute It… 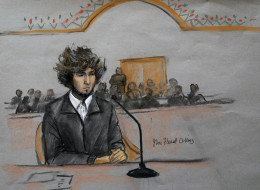 Dzhokhar Tsarnaev has been dead for some time now. The only question is whether we will kill his body, too. (via AP/Jane Flavell Collins)

We do not need to kill him.

Last week, rendering perhaps the most anticlimactic verdict in history, a federal jury in Boston found Dzhokhar Tsarnaev guilty of all 30 counts the Justice Department had filed against him for his role in the Boston Marathon Bombing. This was the right verdict and one his attorneys all but conceded.

The April 15, 2013 bombing killed three and injured more than 200. Days later the Tsarnaev brothers murdered an MIT police officer while attempting to flee.

Massachusetts, thankfully, does not employ capital punishment. Yet this is a federal case and Dzhokhar Tsarnaev’s crimes qualify for the death penalty. Starting April 21 the jury that convicted him shall decide whether the government will end his life clinically or will incarcerate his body until it ceases to function on its own. We prefer the latter.

Either way his life is over, his fate sealed when older brother Tamerlan died following an altercation with police (either due to gunshot wounds or Dzhokhar running him over). Without anybody else to assign guilt, upon Dzhokhar’s capture hours later, the death of his life as it had been was complete.

Dzhokhar’s lawyers will argue mitigating circumstances (with plenty of evidence), namely Tamerlan’s influence and thus he should be spared. Prosecutors will argue he was bent on violently avenging worldwide injustices against Muslims that he and his brother perceived.

But the Justice Department should drop the death penalty or, failing that, jurors should sentence him to life in prison. The alternative to execution is not his freedom, but imprisoning him forever. Whatever vicious perversions of Islam motivated him, they will be snuffed out in the cooler and, as a bonus, Islamic terrorists cannot then turn this “loser,” as some have called him, into a martyr.

This blog opposes capital punishment. In our view it is neither a deterrent nor justice. The state should not be in the business of deliberately executing one of its own citizens. The state is a human institution prone to error, but death is final.

To avoid error, we must necessarily remove execution as an option even where no credible doubt exists. We cannot risk putting innocent men and women to death to ensure we can kill the indisputably guilty.

Justice is about balance and righting the wrong, but there is no undoing the wanton death and destruction in this instance. Nothing can fully salve the victims and their families’ grief.

Ending Tsarnaev’s natural life will not revive slain victims Martin Richard, Krystle Campbell, Lu Lingzi or Officer Sean Collier, nor restore obliterated limbs nor necessarily calm the psychological burden hundreds, if not thousands carry from the bombing and its aftermath.

We achieve balance by not killing Tsarnaev. To have justice, we must not stoop to the Tsarnaev brothers’ level. Let him rot, day by day, month by month, year by year, decade by decade. Then all we are doing is fulfilling the living death he imposed on himself.

We should not kill him.