Longmeadow Daze: Change Is an Elementary Part of (Schooling) Life… 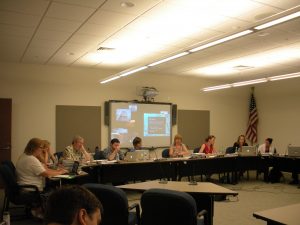 LONGMEADOW—Last Monday the School Committee here, meeting in a still new-smelling conference room off of Longmeadow High School, approved new elementary school districts on a 6-1 vote. Yet that vote came only after a tense and emotional process that offered a window into the atmosphere of suburban municipal life.

With none of the Select Board’s (perceived) buffoonery standing out this year, the elementary school redistricting process seems primed to be the defining political issue in town.

At the heart of the problem is growing overcrowding at Blueberry Hill Elementary School, while serving that larger population with the same resources apportioned to its less crowded counterparts. But shifting students to fix the problem has raised the ire of parents. “Redistricting is an arduous process that takes an emotional toll on a community,” Doyle said in an email. “Now that the decision has been made, Longmeadow will move forward and implement transition plans that help new students to succeed and thrive at Center Elementary School.”

To some, this meeting was tamer than past ones. Nevertheless the litany of concerns from student safety to test scores seemingly belied a simpler, but broader opposition to change.

One parent was “surprised more people in this town are not outraged.” Others made more sympathetic appeals, but ones wanting for perspective within an affluent community bordering one of the commonwealth’s poorest.

Russell Dupere, who is running for School Committee this year, calmly railed about the redistricting process, insisting “I do not believe the system of checks and balances is working in this particular town.”

Committee members pushed back, though. John Fitzgerald, the Committee’s senior member, said opponents were “throwing around terms like due process and equal protection” as if this were a Supreme Court case.

Committee member Elizabeth Bone conceded change may be unpopular, but made without a “secret agenda” and for “the betterment of all students.” But Bone’s contention that “Longmeadow kids are really fortunate” compared to those nearby in Springfield, stuck out.

Both Doyle and some committee members admitted the process was less than ideal. Opponents pounced on claims of opacity and either urged no immediate action or only a Band-Aid for the problem. In April Pratt identified both overcrowding and allocation of resources as the problem, “I just want us to be mindful this is not about space, it is about equity.”

The school committee member mirroring redistricting opponents’ position the most, Michelle Grodsky, focused heavily on the notion of space. As at previous meetings, she invoked the idea of obtaining rented modular space to supplement Blueberry Hill’s classrooms. Modular space, she said, could be obtained for $10,000 a piece annually, alleviating strain on Blueberry Hill and allowing time to correct the districtwide imbalance, which could not be adequately addressed on condensed timelines.

One parent called Grodsky’s plan “not a long shot” but “a safe bet,” yet committee member Kimberly King, convinced of the subject’s gravity though clearly conflicted about it, shot down Grodsky’s proposal. Her research found costs would easily escalate into the hundreds of thousands of dollars. King’s remarks went beyond pulling the rug out from under Grodsky. She discussed issues from real estate values to safety. But despite those concerns, she seemed most assured by a Police Department commitment to deploy all available resources to maintain student safety up to and including parking cruisers at busy intersections.

By comparison, the debate on allowing siblings of rising 5th graders—at parents’ option—to remain at Blueberry Hill was cordial if lively before failing 4-3 with Clark, Grodsky and King in dissent.

The overall redistricting plan passed with only Grodsky voting no.

But the barbs traded back and forth left an impact, cleaving the town. “There’s no way to make everybody happy,” Committeewoman Katie Girard said Monday. She is up for reelection alongside Grodsky. “I take my role as a School Committee member seriously for all children,” Robinson said shortly before the vote. Acknowledging the emotion around the issue she added, “While your school committee members are elected officials, we are also your neighbors.”

Children might plausibly experience trauma due to changing schools, yet that argument seems strained given the context. Longmeadow school children do not face—as their peers in Springfield do—the added burdens of poverty, crime and blighted neighborhoods.

Observers have noted, at nine square miles, parents can ensure children divided by district lines continue their friendships. As for safety, kids biking to school—including through busy intersections—is practically clichéd in Longmeadow and has always carried risks that wax and wane over the years.

One parent, Kathy Nelson, who served on the last redistricting committee, offered a more tempered view saying, “The difficult part was the months leading up to when the decision was made.”

“I can feel the emotion and the passion in this room of parents who love their children,” Nelson said, noting her kids had to change schools a decade ago. The decision was driven by data and many concerns then were the same concerns as those now, but today there are so many more resources and smaller classes. “Things settle down” after the decision is made.

Only time (and Election Day) will tell.