Senator Warren Suits Up on behalf of Second Chances…

UPDATED 11:22PM: To include additional media and for grammar and clarity. 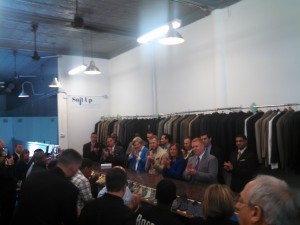 SPRINGFIELD—With a debate growing over the effectiveness and cost of the United States imprisoning a larger share of its population than any nation on earth, US Senator Elizabeth Warren visited a local nonprofit that helps individuals transitioning back into society and those on the edge and at risk of succumbing to a life of crime.

Suit Up Springfield works with men—young and old—who need help with and access to professional attire while seeking employment and, more generally, a change in their lives. Flanked by legislators, Treasuer Deb Goldberg, Mayor Domenic Sarno and Suit Up Springfield’s head Justin Roberts, Warren listened as Suit Up’s alumni told their stories and advocates offered suggestions.

“The good ideas start at the ground level. Justin here saw a problem and said I can figure out a solution to that,” Warren said as the forum was wrapping up.

The federal government’s role, she explained, is not to come up with programs like Suit Up Springfield, but rather to act as their partner.

The event had been planned as an opportunity for Warren to gather input and take ideas back to policymakers and her colleagues in Washington and came only weeks after Suit Up’s grand opening.

Many of the individuals who had benefited from Suit Up Springfield expressed thanks not only for the assistance it provided in getting a jobs, but the improved sense of self-worth the outfits encouraged.

Jonathan Neris, a Commerce High School Student, choked up talking about the abject poverty in which he grew up after moving to Springfield from Puerto Rico as a small child.

Beach chairs were the only furniture his family had early on, but he said, “those were the two of the most beautiful beach chairs.” Neris credited the boost in self-esteem Suit Up provided with keeping him on track and rising in the junior ROTC, rather than slipping into despair and the cycle of drugs and crime.

But the conversation to include implications of criminal justice laws that condemn individuals who made mistakes in life to the outskirts of society.

Richard Devine of the Hampden County Sheriff Office observed that many states, including Massachusetts, suspend driver licenses for drug convictions totally unrelated to automobiles. Worcester Senator Harriett Chandler, he noted, has been working to overturn that.

One speaker urge further reform of the Criminal Offender Record Information (CORI). Another noted, with some exasperation, that a local warehouse contacts Interpol, the international police cooperation agency, during its pre-employment process. Warren chimed in to pan the gratuitous use of credit checks by employers.

Reluctant injecting a partisan dimension, Warren closed with a warning that the House Republican budget threatened funding for cities in need like Springfield. That budget makes deep cuts “to the programs that reflect our values.”

FCI Danbury is just one of dozens of federal prisons (let alone state one) overflowing with inmates, often for nonviolent offenses (via bop.gov)

Speaking to the press she remarked that it was clear the “federal government invests in prisons instead of prevention.” That may change with more Republicans joining Democrats pushing to reduce barriers for ex-inmates reentering the workforce and the community and the emphasis on imprisonment.

“The good news is that we are starting to talking to each other about the possibility of change,” she said. That means addressing mandatory minimums and the gross amounts of money spent on filling prisons, “Why so much money goes into incarcerating people instead of spending that money helping people avoid prison?”

Instead, it should be directed at programs that offer better and more positive outcomes like Suit Up Springfield.

“Part of what I learned today in Springfield is to see how it is a good idea and a small amount of resources can start building opportunities person by person throughout the community,” Warren said.