Something Old or Something New? Sarno 2015 Launches… 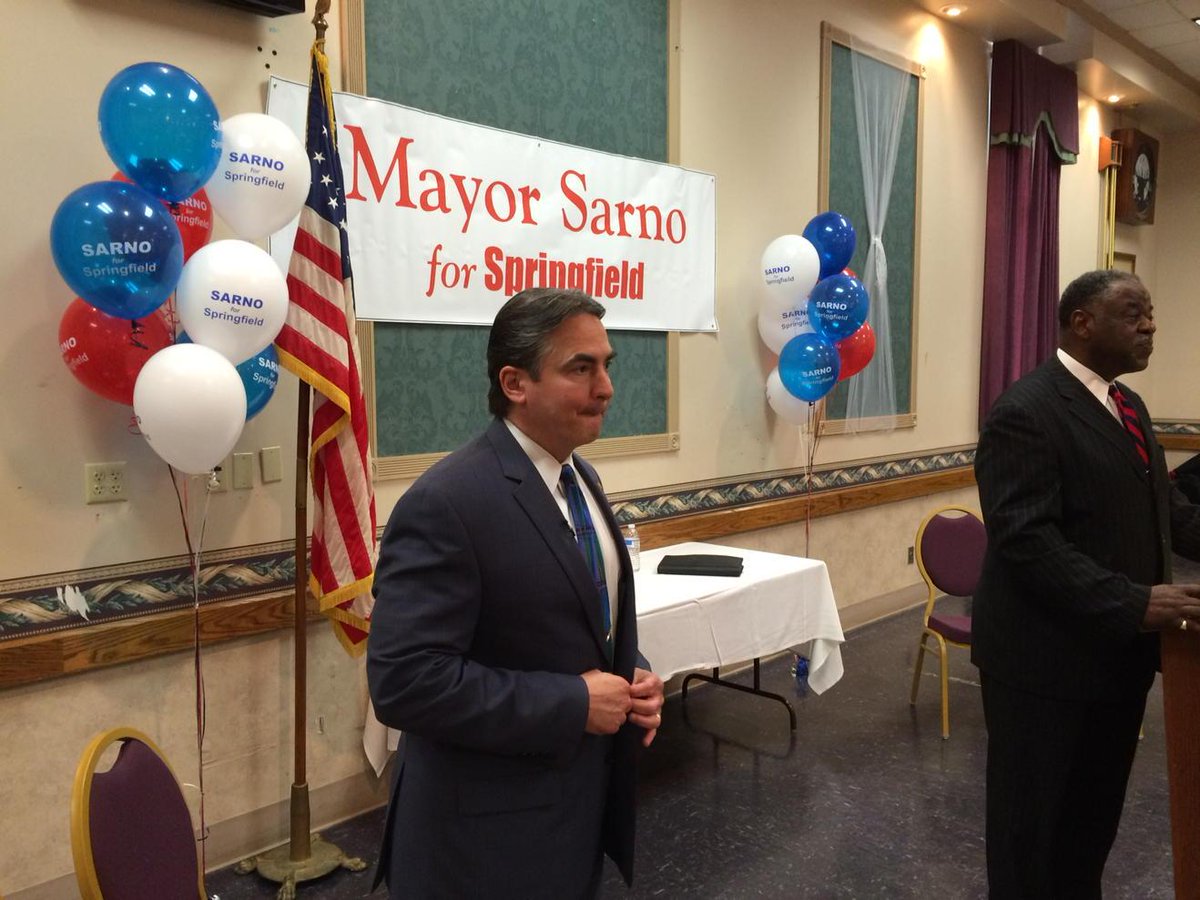 Mayor Domenic Sarno at his kickoff. C. Jackson, the emcee is at right. (via Twitter/@newspix100)

SPRINGFIELD—Before a crowd filling tables and the back wall of the Elks Lodge on Tiffany Street, Mayor Domenic Sarno announced what had long been a foregone conclusion: he was running for reelection. As political events go, it had its moments. But for a politician usually who is not wanting for political charisma like Sarno, Monday night’s event did not overflow with energy.

As guests chowed down on an offering of cheese, pepperoni and bruschetta, the speaking program began only a half-hour after the event’s scheduled start time. Sarno’s daughters Cassandra and Chiara offered a few sweet remarks—somewhat upstaging him—before introducing their father. With his family looking on, Sarno, first elected in 2007, made began his pitch for a second four-year term and fourth overall.

“I am delighted to announce I am a candidate for reelection at the mayor of the city of Springfield,” Sarno said prompting one of the crowds few thunderous cheers. 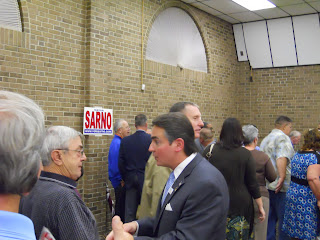 Sarno at his 2011 kickoff at the Cedars (WMassP&I)

Sarno’s 2011 reelection kickoff, held only days before the city preliminary that year, had a much more festive, competitive feel to it. The venue then was the Cedar’s on Island Pond Road and, in addition to being the site of his 2007 mayoral kickoff, carried some significance due to the tornado that had hit only three months before. The stage then was filled with notables and many of them spoke at the time.

State Representative Carlos Gonzalez offered the only remarks from a fellow elected, which included a notes on immigrant past of Sarno’s family and an obligatory joke about his masterfully coiffed hair.

Sarno also mentioned his parents’ story from living through Nazi occupation in Italy to arriving in the United States and, in his father’s case, starting a business as a barber.

Much of the speech had a dry State of the City address air, laying out accomplishments over the last seven years and broadly projecting a positive tone. He made reference in his speech and a subsequent to $2.7 billion in capital construction in the city. That figure is somewhat misleading as it includes regional projects incidentally located in Springfield as well as some whose execution is not certain.

Some of the capital investments Sarno mentioned, like I-91 through downtown, are more incidentally happening in Springfield, rather than transforming the city. (WMassP&I)

While claiming a 19% reduction in crime, Sarno committed to hammering the issue further, which again ignited the audience. Regrettably, while Sarno gave his remarks, new broke that police were investigating a crime scene on Franklin Street where a man had been shot in the head.

Even as Sarno emphasized some familiar themes such as crime reduction and the city’s improving bond rating, he insisted that running for another term was not going to be “the same old, same old.”

Sarno said he was “not a tired warhorse looking for another run around the track” and rather would approach his new term with a renewed vigor before offering his thanks to his family and supporters.

During a brief interview after his remarks, Sarno said there was no significance in the kickoff venue this year other than he being an Elk himself (Sarno has held other fundraisers there). He acknowledged a desire in 2011 to show solidarity with the city still reeling from the tornado. Likewise, he noted that part of his 2012 inauguration festivities were also held at tornado-stricken Springfield College.

Asked to expand upon what his next term would look like, Sarno, more engaged than during his speech, rattled off a list of goals that seemed to build off his previous accomplishments. He highlighted the new “empowerment zone” set up for the city’s middle schools that were nearly taken over by the state and efforts to renovate and/or replace Homer and Brightwood schools.

Sarno noted stepped up code enforcement and park maintenance and, of course, crime-fighting.

Citing efforts to engage the community through the C3 program and other such initiatives, “We will continue to see our attack on crime continue to ratchet up,” he explained.

Some of those attending, like Archbishop Timothy Paul, president of the Greater Springfield Council of Churches were cautiously optimistic. “If crime is going to be his number 1 priority,” Paul said, “he’s going to have to do more with the community, especially the faith community.”