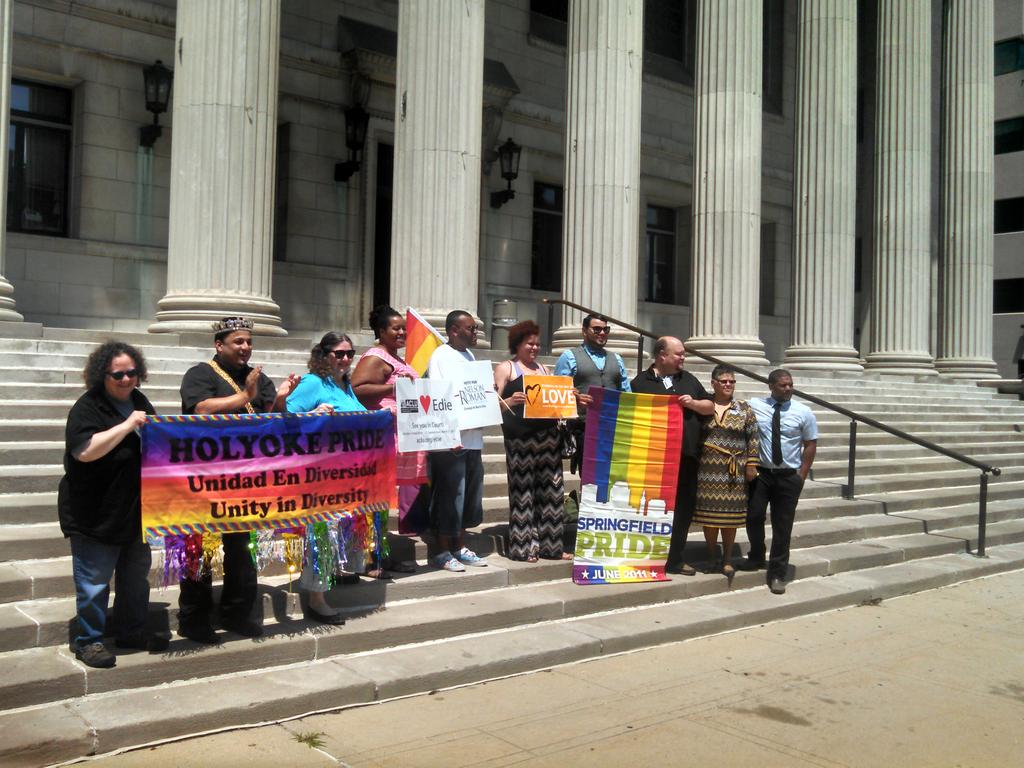 SPRINGFIELD—At an small, impromptu gathering on the steps of City Hall, some of the region’s most visible LGBT activists gathered to celebrate the US Supreme Court’s 5-4 decision legalizing same-sex marriage nationwide. Although the mood was definitely upbeat members of the LGBT community were cognizant of the challenges that lay ahead.

In an interview on the steps of Springfield City Hall, former city councilor Amaad Rivera, President of Springfield Mass Pride, praised the decision as proof, “Our country wants to be a community rooted in love.” Speaking to supporters shortly thereafter, he added, “This is a celebratory moment. It is not the end.”

Nelson Roman, a candidate for City Council in Holyoke and the founder of the Imperial Court, an LGBT advocacy organization, declared several relational LGBT groups had gathered to celebrate the decision.

“As you can see here, we are a collaboration of all of Western Mass,” Roman said.

Even in Massachusetts where same-sex marriage has been legal for 11 years, the ruling was highly anticipated. Springfield resident Aimee Bouchard, a lawyer, said she had been checking her phone for updates at the courthouse. After the news broke, she wandered out onto Court Square, drawn to City Hall by the rainbow banners.

“It’s a great day,” she said. Bouchard and her wife were married in Massachusetts shortly after it was legalized. “Now we can go anywhere” and their marriage will be recognized. Bouchard said she would be going to Hartford’s pride celebration later that evening.

As a political force, the LGBT community in Hampden County is somewhat muted, especially compared to Amherst and Northampton. This reality manifested itself in the limited note the decision received among some local politicians. For example, Mayor Domenic Sarno, who has participated in LGBT pride events, released no statement on the ruling.

Among Springfield area legislators, there were a range of responses on social media, although that also reflects the wide variation of Twitter and Facebook usage within the delegation. Rep Brian Ashe and Senator Eric Lesser marked the news in tweets. A few reps celebrated the decision—no less fervently—on their personal Facebook pages.

Two days, two history making decisions by #SCOTUS. Proud to be from a state that got both movements started #lovewins

Holyoke’s Morse, 26, said in a statement he was “deeply moved” by the ruling, but even he found the pace of progress surprising.

“To the countless LGBT activists and their allies who have toiled so long that this day would come—many of whom didn’t live to see this day—I thank you from the bottom of my heart. Because of you, our country became a better place,” he wrote.

The commonwealth’s top statewide officials, US Senators Elizabeth Warren and Ed Markey and Gov. Charlie Baker all hailed the ruling. Warren in particular did a little bragging, noting Massachusetts led the nation on marriage equality and healthcare, which also had a good week at the Supreme Court.

Attorney General Healey released a video to mark the event. Under Healey’s predecessor, Martha Coakley, the office launched one of the challenges that led to the Supreme Court striking down the Defense of Marriage Act. That case laid the groundwork for Friday’s decision.

America should be very proud. #LoveWins

But from the White House Rose Garden, where President  Barack Obama applauded the ruling, to the steps of City Hall, activists were aware that challenges remain. Roman observed suicide rates for bisexual people remain alarmingly high. Asked what progress was needed on the federal, state and city level, Rivera said the needs included both concrete and less tangible changes.

Many LGBT individuals across the US could lose jobs or housing, perhaps for exercising their new right to marry, as many states and the federal government have no laws prohibiting such discrimination. Additionally, Massachusetts lags on protections for transgender residents in public accommodations.

In Springfield, however, Rivera suggested what was needed was less a policy than to weave LGBT residents more tightly into civic life in the city. “We want to make sure the LGBT community is part of the fabric of Springfield,” Rivera said.

The crowd at City Hall was modestly sized for noontime, as organizers expected. Rivera, now a staffer for Senator Markey attended during his lunch break, but said a larger celebration had been schedule for that night at the Oz Lounge on Dwight Street. The White Rose bookstore in Holyoke had planned another celebration Friday night, too.