Analysis: Three Men. One Office. West Side (and Its Future)…

UPDATED 3:31PM: For grammar and clarity.

UPDATED 8/6/15 10:31AM: For an update including details about Westside’s history, grammar and a new photograph and to reflect a correction. The venue for Gendron’s event was Backyard Bar & Grill, not Backyard BBQ. 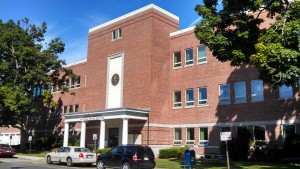 West Springfield Town Hall. Three candidates, all arguably on the stronger side, are competing for the corner office. (WMassP&I)

WEST SPRINGFIELD—Few expected a heated municipal race this year. Yet, following Mayor Edward Sullivan’s surprise retirement announcement after one term, the race is casting shadows on anything even remotely political in this smaller Springfield on the west side of the river.

At-large Councilor Bruce Gendron’s reelection kickoff at Backyard Bar & Grille was no exception. Gendron’s goals for next term, from filling empty storefronts to blunting negative impacts from MGM, mirror issues likely to be on the mayoral campaign menu. Two candidates—former Mayor Gregory Neffinger and Town Attorney William Reichelt—were there. Unable to return from Boston in time, the third, State Rep Michael Finn, had a presence in the form of high-profile supporters.

Voters must winnow the field of three candidates to two, who will face off to become Westside’s fourth mayor since legally becoming a city in 2000. As West Springfield’s September 8th preliminary approaches, a vague fear of decline hangs over what many still call a town.

John Sweeney, the outgoing Council President and District 4 councilor, said political cycles often only accommodate short-term change. “The problem with politics is things take a long time,” he told WMassP&I at Gendron’s event. That, he added, is “the biggest obstacle to moving the town forward.”

Mayor Edward Sullivan surprised many by not running for reelection. (via townofwestspringfield.org)

By almost any metric, West Springfield has escaped the fate of its namesake. Despite many differences, Westside can seem a lowercase Springfield.

The rise of an urban(ish) town center and the industry along the ex-Boston & Albany railroad echoed Springfield’s’s growth. The two communities nearly recombined in the late 19th century. But Westside caught the wind of suburbanization, bolstering its post-war commercial corridors and home values in a way Springfield could not long-term.

But the strain of regional economic decay has aggravated what ails West Springfield’s poorer neighborhoods. Storefronts near the town green and around Century Shopping plaza are vacant or occupied by low-end stores. Hoteliers make more money housing the homeless than travelers.

Things may be on the up and up, depending on perspective. At the Dante Club last month, Reichelt praised his boss, Sullivan, for getting the town on track.  With a note of nostalgia, the 29 year-old candidate discussed Westside’s better days, juxtaposed against caution about the politics of old seizing town affairs once again. As in past interviews, he underscored his service to Westside.

Despite intending to continue Sullivan’s work, there was a longing for revival. “Together we can reinvigorate Westside,” Reichelt told supporters that night.

Some weeks before, Finn launched his bid, also at the Dante Club. Finn was elected to the 6th Hampden district in 2010 after a lengthy tenure on the town Council, including stints as its president. However, the towering, jolly former court officer has policy chops, too.

In 2012, Finn, then a freshman, told WMassP&I he had not requested the Healthcare Finance Committee, and knew little about the subject. But during an interview about his reelection that year, he rattled off details of a huge recently-passed huge cost-containment bill with ease.

He had long desired a committee chairmanship, but his relative lack of seniority limited such opportunities on Beacon Hill.

Taking ahold of a gavel may not be just about power, but also giving back to newcomers. Sweeney, the town Council President, called Finn “a great mentor” when the former joined the Council. Sweeney told WMassP&I he is backing Finn for mayor.

Interestingly, Finn has faced Neffinger before. The architect by trade was Finn’s 2010 opponent. Amid the tea party wave, Neffinger put up a bigger fight than anticipated. He resurfaced in 2011 to win the mayor’s office that longtime mayor Edward Gibson vacated. Partisans differ as to whether complaints about his tenure were substantive or political, although the unpopular proposal to build a casino at the Big E was a definite factor. Sullivan crushed Neffinger by a nearly 2-1 margin.

Yet at Gendron’s kickoff, Neffinger seemed un-phased by his defeat, eager to get back on the horse. “Still a lot of good things to be done,” he said, adding that former supporters urged him to reenter the fray. “The response I’m getting is enormous.”

A considerable unknown is how the race will flesh out as the three candidates represent, in their way, three different segments of town. Finn, a guardedly progressive-leaning Democratic rep, Neffinger a conservative Republican and Reichelt a political independent each have bases that could align along or cut across those labels in this nonpartisan election.

The representative seems almost certain to be in the general based on his long political career in town alone. The question then becomes whether Neffinger or Reichelt advance to the general. A Finn-Neffinger race could polarize the electorate against Neffinger. Sullivan beat Neffinger in 2013, many believe, because a Democrat/unenrolled bloc formed to oppose him. As Reichelt supporters appear to come from across the spectrum, only a few might migrate over to Neffinger.

Should the race become a proxy fight between Democrats and Republicans, it might stiffen Neffinger against Finn given West Springfield’s decidedly purplish hue. In recent years, the town leans Republican in top of the ballot race while mostly electing Democrats down ballot.

West Springfield Generating Station, one of Westside’s most visible landmarks from I-91 or US Route 5. (via wikipedia)

A Finn-Reichelt race may be the most unpredictable. Name recognition and a generally good reputation again favors Finn. However, Reichelt has cultivated an apolitical profile—he has not even contributed to candidates in partisan races according to federal and state records. Enticing Millennial Westsiders to participate could bolster Reichelt further.

The sense is that West Springfield is ready to settle down and end the electoral gyrations of late. Whether that will contribute to solving the town’s problems is unknown, but it can’t hurt.

“West Springfield is going to be fine as long as we work together for Westside,” Sweeney said.