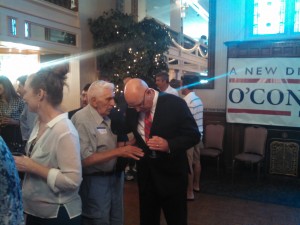 Fran O’Connell, right, at his kickoff this past June. (WMassP&I)

HOLYOKE—The early 1990’s were a period of labor unrest at the Holyoke Visiting Nurse Association. Relations between management and workers, then-represented by Local 285, Service Employees International Union, iced over and devolved to strike threats and eventually a lockout. The VNA claimed it acted only in its patients’ interests, but workers thought its tactics heavy-handed.

This bit of local labor history from eons ago would normally be irrelevant in the mayoral election here. However, the VNA prevailed partly because Francis “Fran” O’Connell, running against incumbent mayor Alex Morse, provided the replacement workers that wounded the union to which he once belonged.

“He had worked with the union, he had been on our side,” Brigid Barrett, a former VNA nurse from 1983 to 1993 and union steward said of O’Connell.

These events, detractors say, contribute to a portrait of O’Connell as Machiavellian. When a former campaign staffer claimed he made sexist remarks, she also said he considered saying one thing to get elected and doing another once in office. O’Connell’s campaign has dismissed the accusations as those of a disgruntled ex-employee.

However, National Labor Relations Board decisions, contemporary press accounts and interviews with former VNA nurses point to O’Connell’s role in undermining his former union and coworkers’ leverage during a VNA-induced work stoppage. Area labor officials expressed surprise at this episode as O’Connell has represented himself as a progressive employer.

“I believe building positive business and employer relationships is important, but not at the expense of critical patient care,” O’Connell said in a statement issued via a spokesperon. “It is imperative that patient care come first at my business, O’Connell Care at Home, which is why we staffed the Holyoke Visiting Nurse Association in the early 1990s when the union organized a strike.”

But that “strike” never happened. NLRB documents and contemporary news accounts indicate a lockout occurred, instead. O’Connell’s spokesperson did not immediately respond to comment on the lockout.

In the fall of 1992, tense contract negotiations consumed management and labor. Former nurses remember continuity of patient care, worker safety—particularly in bad neighborhoods—and staffing levels were on the table.

“We were exceedingly short-staffed,” Barrett recalled.

Nearing impasse, the union planned a one-day strike for Monday November 23, but as of the Friday before members still needed to authorize one. The union postponed the strike a day.

Patti Mertes, another former VNA employee and now Holyoke Board of Health vice-chair, said, “It was very difficult to even take the one-day strike vote.” Members never got that chance.

When nurses showed up to work on Monday, VNA officials prevented them from entering. On November 24, the defunct Transcript-Telegram wrote “the association barred nearly 25 nurses and physical therapists from the building and contracted with O’Connell Professional Nurse Service on Appleton Street for temporary help to handle the association’s 700 clients.”

A three day picket ensued. Being Thanksgiving week, nurses did not officially return until the following week. One former nurse who requested anonymity said afterward some O’Connell nurses apologized for crossing the picket line, but did so out of fear for their jobs.

The VNA refused to call it a lockout, the management equivalent of a strike wherein employees are barred from working. Historically, lockouts were considered rare.

A 1994 NLRB decision suggests management, not the union, precipitated the stoppage. That case, which spanked the VNA for several unfair labor practices, did not rule on the lockout. Rather, deciding another issue, it credited testimony that said workers were locked out before authorizing any strike.

Although noting the VNA’s position, the Transcript-Telegram tended to suggest the stoppage was a lockout. The VNA told the paper it hired replacement workers after failing to ascertain whether a strike was imminent. “We cannot and will not play with” patients’ lives,” the VNA reportedly said.

An age-old labor dispute has been drawn into the battle for Holyoke City Hall. (WMassP&I)

O’Connell’s statement to WMassP&I was similar, saying he staffed nurses for patients requiring constant care. “Only those patients that were home-bound and unable to seek alternative methods of care were attended to during the strike,” he wrote.

Mertes argued nurses would never risk patient health. “Management consisted of several registered nurses who would have been able to see patients that needed urgent care,” she emailed. Mertes worked with O’Connell as a fellow nurse, but these events soured her opinion of him. She supports Morse’s reelection.

Some patients sided with the nurses, joining the picket line the Transcript-Telegram reported. Still, the union came away defeated.

“We agreed to go back, to continue negotiations,” Barrett said and “Work on their terms while we worked something out.” While displeased by O’Connell’s actions, Barrett does not live in Holyoke and expressed no opinion about the race.

“It was successful union-busting because it scared people,” Mertes said in an earlier interview. “Unfortunately, due to staff from (what was then) O’Connell Professional Nurse Service serving as replacement workers, contract negotiations remained at a standstill,” she later emailed.

The events echoed those in another, earlier NLRB case, affirmed by the 1st Circuit Court of Appeals, that found the VNA and O’Connell jointly violated federal labor law. Federal and state records suggest it is O’Connell’s only encounter with workplace regulators.

In 1991, O’Connell told his employee, Eileen Bourque, she would no longer get VNA referrals. VNA staff had complained to O’Connell that she joined its nurses during a work-to-rule union action, arriving at work precisely when the workday began.

O’Connell’s statement briefly touched on the NLRB ruling, which found for Bourque “because the matter was related to availability and the time in question was spent participating in union-related activities.”

Although Bourque was not engaging in protected activity—she entered with others for safety reasons following assaults on staff in the parking lot—what mattered was her employers thought she had.

The VNA reversed its request after Bourque explained the situation to O’Connell, but she still lost out on work. The Board ordered the VNA and O’Connell pay her lost wages under the joint-employer doctrine.

Notably, the 1993 decision states Bourque testified O’Connell “told her that she should not mention this meeting, that HVNA was his bread and butter, and that if [not referring her] was what they wanted, he would oblige them.” O’Connell and VNA staff denied anti-labor bias, but the Board believed Bourque.

In his statement, O’Connell said he provided the VNA temporary workers after speaking to his lawyer. He did not claim a legal obligation to do so. In light of Bourque’s testimony, O’Connell likely reaped a windfall from extra referrals during the standoff.

A spokesperson for SEIU 1199, which absorbed Local 285, did not immediately return requests for comment, but NLRB records show numerous battles between the VNA and 1199 since the 1994 ruling.

O’Connell’s company continued to grow into the healthcare empire it is today. After a new contract favoring management took effect in 1993, many nurses, including Barrett and Martes, moved on.

“It took a lot of power away from us,” Barrett said of the 1992 stoppage. “It gave us less leverage because they didn’t have to pay us.” She left the VNA that April.