It’s Faccia a Faccia As Circosta & Sarno Advance to November…

Now in the spotlight… (via Facebook/Circosta campaign)

SPRINGFIELD—As the dust settles on the mayoral preliminary here, the enormity of the challenge before Salvatore Circosta has begun to come into focus. Although Circosta received enough votes to continue his campaign into November, incumbent mayor Domenic Sarno scored 75% of the pitifully few votes cast this past Tuesday. While thousands more will vote in the general election, Circosta has a tremendous amount of ground to make up over the next eight weeks.

To their credit, Circosta and his supporters are not blind to the scale of the task. Even as Sarno won 5067 votes to Circosta’s 576 in the crowded preliminary, the latest campaign finance reports show the former has almost 80 times the latter’s cash on hand to spend between now and November 3.

“The battle begins anew,” an undeterred Circosta told WMassP&I on preliminary night. He was realistic about the results, partly attributing the meager turnout and lopsided results to Sarno’s decision to avoid direct criticism of his record. “Ultimately Domenic strategically withheld debate,” Circosta said.

A couple of hours after the polls closed and it was clear that he had secured second place, Circosta’s results watch party at Nathan Bill’s Bar & Restaurant in East Forest Park had wound down somewhat. Several guests were leaving, while the candidates’ close advisers mingled near and in booths on the far side of the restaurant, while regular patrons congregated by the bar. 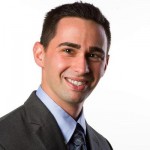 Despite the odds, Circosta and his campaign are moving full-speed ahead. With the preliminary behind him, Circosta said both he and the electorate will be looking at November with “different lenses on.”

Perhaps Sarno’s cash advantage will be the biggest challenge Circosta faces. A more substantial fundraising base could grow Circosta’s name recognition, something built into this election for the mayor. Some close to the challenger’s campaign have worried that some potential donors may balk after the incumbent’s show of force in the preliminary.

Circosta himself was more sanguine. “I can speak the truth bluntly,” Circosta told reporters. “When people hear that they’ll invest into it,” speaking of his campaign.

He acknowledged strengths Sarno enjoyed including a likeable personality and long-held connections to prominent and powerful individuals across the region. But Circosta also turned those against the mayor. By supporting the relocation of the Hampden Sheriff’s Western Massachusetts Alcohol Center to the North End, Circosta said Sarno was “more dedicated to political friends than his constituents.”

“There’s also a machine we’re dealing with in Springfield,” he added, fully embracing the mantle of underdog in this race.

Circosta may more broadly recast many of the very accomplishments Sarno touts as vulnerabilities. While not opposing to the project itself, Circosta called staking Springfield’s future on MGM “quite a gamble,” echoing a fair, if not entirely true critique to that effect common within city political circles. 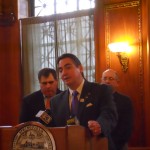 Reasonably, Circosta is focusing on higher turnout expected in the general election and with good cause. Roughly four times the number of voters are likely to show in November, consistent with past mayoral elections. Even in 1997 and 1999, the last time an incumbent faced no challenger, turnout was about average. He is also looking forward to debating Sarno, which may be harder for the incumbent to avoid in a one-on-one contest.

Many citizens are “numb” to city politics Circosta himself argued. “We need to give feeling back to the people,” he said.

The challenge before Circosta remains immense. To be viewed as, in his words, “a realistic contender” and an alternative, Circosta will need to energize and educate voters to a considerable degree.