The Message is in Ivelisse Gonzalez’s Mayoral Campaign…

This post is the third in a series on Springfield mayoral candidates ahead of the September 8 preliminary. 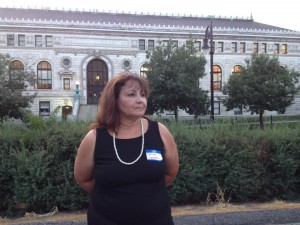 SPRINGFIELD—With less than two days before the polls open, Ivelisse Gonzalez appeared pragmatic about her first bid for public office. Though hopeful about her chances, she was also realistic about her campaign and what it represents in the broader landscape of Springfield politics.

“It started as ‘let’s give Sarno a message’” she said, speaking of incumbent mayor Domenic Sarno.

Gonzalez hinted at a certain fraternity among her fellow challengers to Sarno, jointly taking on his reign. Noting that six entered the race to challenge him, Gonzalez said, “That says something is not right.”


It is not all wine and roses among the challengers—only one is expected to make it past Tuesday’s preliminary election—but Gonzalez suggested they have gotten close. Sarno is widely expected to advance to the general election.

Gonzalez first came to Springfield from Puerto Rico in 1986 with one child in tow, where she met her husband. After completing programs in business administration, she worked for the unemployment department and later a No Child Left Behind-funded program in Chicopee and Springfield.

“I’m like your neighbor next door,” who knows Springfield’s “ins and outs.” she stated. Neighbors have ask her advice about navigating city bureaucracy, for example. Her six children grown, she has turned to electoral pursuits.

During an interview with WMassP&I at the Starbucks here, Gonzalez, a North End resident, discussed the city’s failures to adequately address crime, educate children and broadly rebuild its economy.

Though not an opponent of MGM, she criticized its capture of city attention, especially as delays mount. She noted the upheaval of businesses in the casino’s footprint, and lack of smaller-scale economic development in the city.

“We just have to pray that Connecticut doesn’t build first because then we are going to be down the drain,” she said.

Gonzalez argued the city needs to provide more tax breaks to small businesses and lobby larger ones, namely retailers like Target, to set up shop in the city. Citing myriad empty spots in the Eastfield Mall and retail corridors she said the city should aggressively market these to potential employers.

City officials have called Boston Road’s reconstruction an inducement for retailers like Target, to come to Eastfield. However, that is yet to happen.

Gonzalez called for restructuring policing, including City Hall and the courts. She noted slow police response times and called for more cops on the beat and in the community. She also said more trust between the police and policed was needed following unrest in Ferguson and elsewhere.

Gonzalez sees issues with crime, the police and the community as bigger than just the department itself. (via Facebook/Springfield Police)

“We have to balance between what really happened and what can be avoided,” Gonzalez said of encounters between cops and residents.

With education an issue this year, Gonzalez mentioned she had gone through an independent education plan for one of her daughters and helped friends and helped neighbors with similar issues.

Deemphasizing testing is a priority, but Gonzalez also highlighted the need for more parent facilitators.

“We are not prepared to have all these kids in schools because we lack facilitators,” she said, observing that many different languages are spoken at students’ homes.

Although possessing a philosophical air, Gonzalez said she has enjoyed running and been embraced by many residents. She has even lost weight while campaigning (due to missed meals, she admitted). She and the other challengers “have been a very tight group.” Gonzalez added, “I have had other candidates give me a call to talk to me.”

Rather than pledge herself to one issue, Gonzalez committed to putting her all into the job.

“I told my family, you guys will text me” if elected she said and, “That’s the closest you will get to me.”