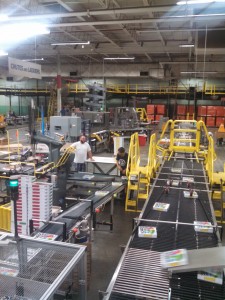 EAST LONGMEADOW—The whir and hum of machines sorting, folding and packing markers, die and tokens hovered over every station. Different board games boxed for shipment, were packed together in bricks of Sorry, Monopoly, Connect Four and more, to be sent off to retailers or intermediary distributors at one of the more legendary, extant manufacturers in the Pioneer Valley.

Milton Bradley, now owned by Hasbro, no longer owns the Shaker Road plant, but its products are still made here under an agreement with the new owner, Cartamundi. Investment has raised the factory’s value, employing hundreds at good salaries, if fewer than in the past. Still, the visit by Senator Eric Lesser and Rep. Brian Ashe, both of neighboring Longmeadow, sought to underscore manufacturing as a means to reviving the region’s moribund economy.

Joined by owners of other area factories, the tour hit three plants here and one in Chicopee, making products ranging from windows to hand dryers.

Iconic products like venerable board games and high-powered dryers are made here, and, despite the march of automation, could employ more. Yet, a skills gap locks many out of these better paying jobs.

In some ways deindustrialization is to blame for the region’s woes. On the road to Cartamundi/Hasbro from the tour’s previous stop at Excel, a hulking empty plant across from American Saw lies fallow. The industrial cityscapes of Chicopee and Springfield are dotted with even more arcane multistory factories, some abandoned for half a century or longer. 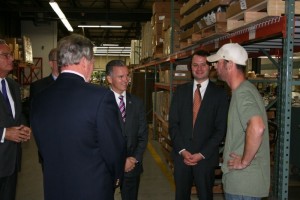 A confluence of recent events could form a new industrial anchor. There is an insourcing trend, bringing back precision, high-tech manufacturing to the US, aided by a marketing advantage of “made in America.” Additionally, the green revolution is fueling job growth, especially in manufacturing.

The maker of the Xlerator dryers, Excel has grown amid this greening. Known for their rushing, forceful blasts of air, the dryers use 80% less energy and cost 95% less than towels over a year. Final assembly and most major components—the main exception being the Mexican-made motor—are also USA made.

“Thanks to Xlerator, we’re 18 times the size” by sales Denis Gagnon, the company’s owner said.

But Lesser and Ashe found Gagnon saying largely the same thing other business owners had said. Positions go unfilled because it is difficult to find individuals qualified to do the work of assembling the device’s intricate components while maintaining quality.

One task will be steering students into programs that prepare them for these jobs. Funding aside, part of it is convincing them manufacturing is no longer a dirty, greasy job anymore, a possible turnoff for some (though perhaps a turn-on for others).

Moreover, while developments like the Page Boulevard railcar plant offer better physical access to city residents, trade schools like Putnam and policymakers must double their efforts to steer Springfield’s promising young workers from the city’s poorest quarters into those jobs.

Meeting both challenges will require investment and gentle nudging from Beacon Hill.

If nothing else there is reason to hope these manufacturers will remain for some time. Costing less and being greener, Excel and its dryers seem secure. As for Cartamundi and Hasbro’s operations here, The Economist recently reported board game sales are booming, making it the rare industry not totally upended by the digital revolution.