Could Western Mass Become the Next Economic Promised Land?… 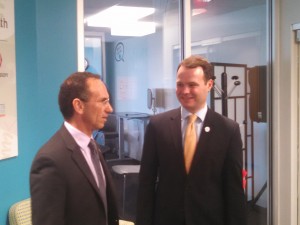 SPRINGFIELD—After a 12+ hour flight from Tel Aviv to Boston, would Israeli businessmen, entrepreneurs and high-tech engineers be willing to make an additional hour and a half trip here?

That is what Israeli Consul General for New England Yehuda Yaakov and state Senator Eric Lesser are counting on as they took the first steps toward attracting Israeli investment to Massachusetts’s western frontier.

During a tour of Greater Springfield, Lesser introduced Yaakov to some of the region’s tourist attractions and tech and startup incubators, collecting names, contacts and business cards to pass along to Israeli companies and business executives in Massachusetts and abroad.

Speaking to local leaders in health, job training, innovation and entrepreneur mentoring at TechSpring’s downtown offices, Yaakov decalred he was ready to “spend capital to talk to Israeli CEO’s in Boston” and encourage them to look west. “I’m happy to do that,” he said.

Business with the tiny republic already contributes $6.2 billion annually to the commonwealth’s economy. Silicon Wadi, Israel’s answer to Silicon Valley, and Israeli tourists could look to the Pioneer Valley and its resources as a lower-cost alternative to Metro Boston, where much of investment is currently.

Yaakov, who met Lesser during a State House event marking Israeli Independence Day, assured this was only first of many visits from him and consular staff including education and commerce attaches.

A career diplomat in Israel’s foreign service, Yaakov has embraced his posting in Boston, even its sports teams despite growing up in New York. He told reporters this was his first trip here as consul, but had been eager to come, “Nothing like seeing it first-hand.”

Kudos to Lovullo’s #RedSox 4 bashing #Yanks & playing w/style. Looks like they have stuff of winners 4 next season! https://t.co/tB3bj5XvFb

Lesser and Yaakov started the morning at the Basketball Hall of Fame and later went to the Big E. They closed out the day with the Greater Springfield Visitors and Convention Bureau.

Despite a few touristy stops—Lesser co-chairs the legislature’s Tourism committee—the TechSpring meeting more closely evoked a key part of Lesser’s campaign. As a candidate last year, the Longmeadow Democrat emphasized manufacturing and tech as a means to pull Greater Springfield out of its decades-long economic malaise.

Also on the itinerary was a visit with representatives of the Jewish Federation of Western Mass. Although many Israelis are secular, building ties with the Springfield area’s Jewish community may help foster firmer economic bonds. 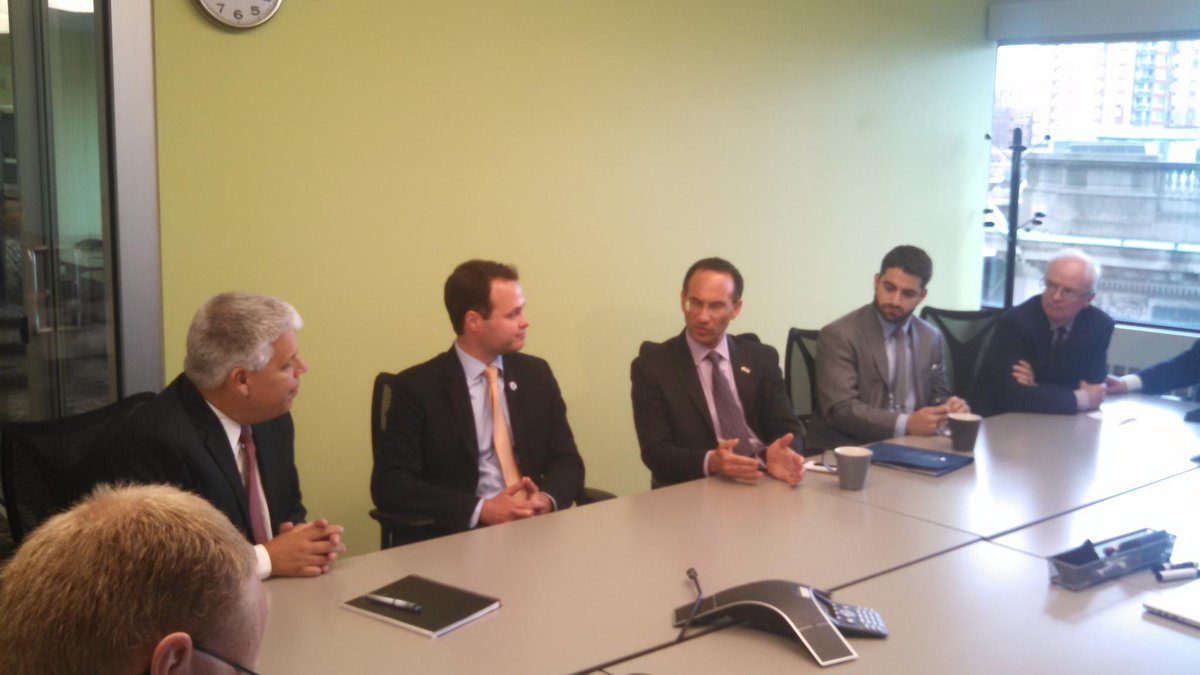 Lesser and Yaakov meeting with representatives of Springfield’s tech, IT workforce development and innovation organizations. (WMassP&I)

At TechSpring, a project of Bay State Health, Yaakov met with startup and tech leaders trying to spark a tech economy in the Pioneer Valley. In a conference room overlooking the rainy cityscape, Scott Foster, an attorney at Bulkley Richarson and co-founder of Valley Venture Mentors, described how the region has experienced an “explosion of activity” in fields of interest to many Israeli companies.

“It is a way of attracting people into STEM,” Yaakov observed, referring to science, technology, engineering and mathematics.

Tel Aviv is home to much, but hardly all of “Silicon Wadi” the nickname for Israel’s tech economy (via wikipedia)

Some referenced a recent moniker applied to Israel, “start-up nation,” which comes from a book by the same name. Israel’s has always had a tech economy, but it has flourished recently, fueling a broader boom in Tel Aviv and beyond.

Yaakov said that the book downplayed a crucial facet of Israeli life, the Israeli Defense Forces, “The kids do compulsory military service.”

However, the emphasis on tech does not start when young Israelis enter the military at 18. Rather, Yaakov explained, high school students can take classes in cyber studies, including cyber security—an area of increasing concern for American companies and government.

Israelis, Lesser said, “organized their cyber security around an overriding national challenge” i.e. defense. Large challenges like reviving a moribund economy, he continued, can be realized, “if you give people a sense of a higher mission.”

“Cyber security is a big concern for us for sure,” Bay State Health’s Chief Information Officer Joel Vengco said. He added Bay State was looking to leverage IT to provide innovative and value-based patient care.

Vengco, a TechSpring founder, noted that the region mirrors the US as a whole, “We’re an amazing community that’s diverse.”

Yaakov was sold on bridging the banks of the Mediterranean with the banks of the Connecticut River. “The networks in this room are some of those that open doors,” to “start developing those economic ties,” he said.

The consul noted that Gov. Charlie Baker will lead a trade mission to Israel early next year and urged Springfield business leaders to join him. About 120 people accompanied former Gov. Deval Patrick during one visit to the country.

Speaking to WMassP&I, Yaakov pointed to Israel’s training high school students for careers in tech as a model for Western Massachusetts. “That fuels everything that comes after,” he said, like his country’s second place globally in cyber security behind only the San Francisco Bay area.

Some 200 Israeli companies already have a presence in Massachusetts, a large well from which the region can draw. Yaakov said his job was to “create the matchmaking” for those firms and their potential partners in the 413.

“We want to make sure those planes stay full,” Yaakov said.