Editorial: Holyoke Councilors Can’t Always Get What They Want… 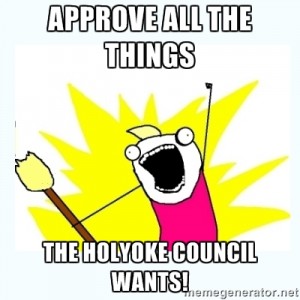 Artist’s rendition of a Holyoke councilor. (via memegenerator.net)

One major trouble in Holyoke these days is the water and sewer departments’ effect upon the budget. In comparison to Springfield, where the unitary Water & Sewer Commission essentially operates off-budget, the costs and revenues of Holyoke’s systems for delivering potable water and removing water directly affect the citywide budget.

However, the separation of the departments leaves the city with no recourse when sewer customers refuse to pay their bills. Unlike water, sewer access cannot be shutoff and would engender other sanitary problems. State lawmakers devised a solution any Massachusetts community can use, but that’s not good enough for the Holyoke City Council.

The issue is not new, bedeviling the Paper City for some time now. This year it has opened a $1.3 million hole in the city budget. The matter has become fodder for the city political scrum including the mayoral race, but really it just exposes either a poor understanding of state government or the more naked cynicism rife within city politics.

This latest round flared up after mayoral candidate Francis “Fran” O’Connell demanded Mayor Alex Morse sign a resolution urging Beacon Hill to approve home rule legislation allowing Holyoke to shut off water service to customers who refused to pay sewer bills. Now, councilors have both directly and implicitly laid blame on State Rep Aaron Vega for not getting the bill passed.

The attack shows a pained ignorance about how the state legislative process works. Thousands of bills are filed with the legislature every year and the vast majority fail to pass. While we have criticized how Speaker Robert DeLeo runs his House, we do not fault him or the body for balking at rubberstamping every home rule petition the commonwealth’s 351 cities and towns send in.

But Holyoke councilors do not want that as it would remove their control of the water department. Invoking 40N places appointment of the water/sewer entity’s commissioners with the mayor, possibly subject to Council confirmation. Council President Kevin Jourdain dismissed 40N as a “cookie-cutter” solution, but it is a solution to a problem common to Massachusetts municipalities. That it does not accommodate Holyoke councilors’ need to retain power is not the legislature’s concern. 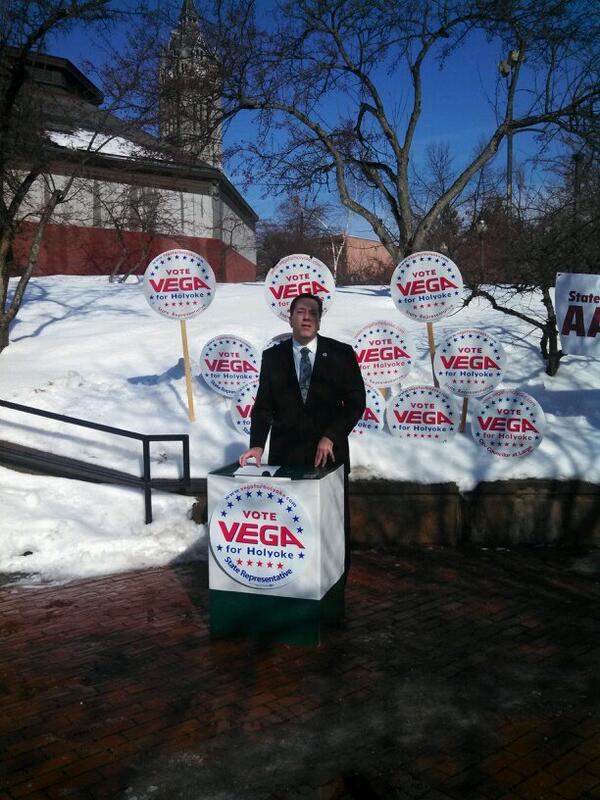 Not the villain here (WMassP&I)

Some councilors have attacked Vega for failing to enact the Council’s will. Yet, he filed the Council’s legislation after Morse, who is said to support accepting 40N, approved the initial petition. But Beacon Hill is not interested in making exceptions to a statewide policy just for Holyoke.

Holyoke’s problematic sewer fees collection is a serial contributor to the department’s and thus the city’s deficits. If any politics-before-city exists here, it is among councilors who would rather preserve arcane power than streamline government and accept a solution for an immediate problem. Arguments about checks and balances might mean more if the Council managed its appointment powers better. For example, it has left the Auditor’s office vacant for 18 months.

Providing safe drinking water and carting away storm water and waste is the work of civil engineers and planners, subject to complex state and federal rules, to say nothing of generally accepted public health standards. The legislature has made the decision that combining those functions furthers that cause.

If the Council rejects the solution within the general laws, it must accept the consequences in the city budget year after year, not pout and blame somebody else.

O’Connell’s demand that Morse sign the resolution is fundamentally a political issue for voters to sort out, but frankly, who cares? It couldn’t matter less whether Holyoke formally declared, in effect, “Give us what we want or we’ll be forced to ask again!”

Whether Morse actually pushed a storm water fee seems murky, but fair political game in a heated election, though no solution will eliminate the current fiscal year’s problems. O’Connell may favor the Council’s cake-and-eat-it-too approach today, but if the legislature rejects that, either he or Morse will face this sewer problem again.

We realize there is a mayoral race going on, but here, that fracas is ancillary to councilors’ posturing and self-serving lashing of a state rep in the process. Beacon Hill is a fair target for our woes in the Pioneer Valley—when it is guilty. Scapegoating it or anybody else to shelter some ancient power at the expense of the city, however, deserves only to be called out as the bovine varietal of a sewer’s solid contents.