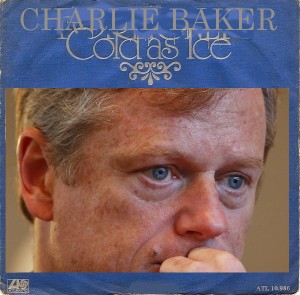 Following the attacks in Paris that murdered 129 people—and word that at least one dead assailant crossed into the Europe with a Syrian passport—governors across the country have announced their states would not host Syrian refugees. It is with great shame and disgust that we acknowledge our governor, Charlie Baker, is among them. There’s no denying it: Mean Charlie has returned!

To be fair, Baker said he wanted to know more about the vetting process for refugees. However, had he bothered to speak to his general counsel first, he would know states have little, if any power to stop the settlement of refugees approved for entry into the US. Thus his statement is purely political.

President Barack Obama, speaking from Turkey, itself the victim of the Islamic State’s terrorism, strongly condemned this anti-refugee rhetoric.

“Mean Charlie” has been mostly repressed since Baker lost the 2010 gubernatorial. He surfaced that year during immigration discussions in particular. But he disappeared during the 2014 campaign. Baker even supported settling migrant children in Massachusetts. The only recent flicker of Mean Charlie came this winter during his dealings with then-MBTA GM Beverly Scott.

But Mean Charlie is back, peddling the same tripe about Syrian immigrants as other Republican governors (and one Democratic one), turning his back on millions of people fleeing the Civil War in Syria (only tens of thousands would ever likely be settled in the US).

It's a shame that Governor Baker doesn't know the difference between refugees and those from whom they need refuge.

Yes, at least one of the Paris attackers appears to have entered Europe with a Syrian passport. However, most of the terrorists so far appear to have been French nationals. Shall we bar them from entering our commonwealth, too? The French don’t even need a visa to enter the US, just a ticket to Logan Airport…

Legal experts question what authority states have as the vetting of the refugees takes place entirely under federal supervision and once admitted to the US, their final location. That complex vetting process includes background, medical and intelligence checks, often lasing two years or more. The Atlantic Ocean adds further insulation from unapproved entrances.

Refugees are the most security vetted population who come to the United States. Period. My @NYDailyNews op-ed: https://t.co/a2BP8WqBMW

Language matters and had Baker merely said he wanted to know more about the vetting process before he could render an opinion about resettling refugees, we would have little complaint. After all, we urged reviews to be vigorous ourselves.

Instead, Baker embarrassed this commonwealth before the world and belittled himself by standing alongside some of his party’s great demagogues and cowards. Nevermind that the Islamic State would prefer we hate the refugees it has helped to create.

Why would a jihadist who expressly rejects all notions of modern citizenship take his passport on a suicide mission?

So it gets found.

Seems to me that refusing to take in refugees from ISIS b/c of Paris attack is pretty much literally letting the terrorists win.

Few people are more tempest-tossed than those fleeing warzones (and most are not military-aged men), but rather than welcome them, Baker’s legal authority aside, he snuffed out Massachusetts’s own light beside the golden door.

Governor, reverse yourself…now. Restore the dignity your flippant remarks have taken from our commonwealth. We can brook your bland governorship, but not your shameful appeals to fear and your party’s restive right-wing. Someday, you’ll pay the political price.

Perhaps “Mean Charlie,” however much with us now, misstates the situation. Pandering Charlie fits better.