For One More Year, Fenton to Be on Top of Springfield Council…

UPDATED 4:19PM: To include details of another candidacy for council president reported by Masslive. 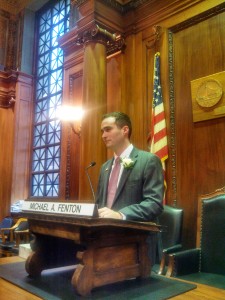 While Tuesday’s election results rocked the composition of the City Council in Springfield a little bit, one change not in the offing is in the body’s leadership. In a prepared release, Council President and Ward 2 councilor Michael Fenton announced that he had secured the votes to remain president in the new term beginning this January.

“It is an honor to be chosen to lead during this critical juncture in our City’s history,” Fenton’s release quoted him saying. Fenton was first elected president in 2014.

Fenton’s third term would be a relative rarity for the body, which only sporadically elected presidents for two consecutive terms since the Plan A government was adopted in 1961, let alone three yearlong terms. In general, however, Fenton’s leadership has been received approvingly among residents and his colleagues.

“I want the public and my colleagues know that I will make every minute count during my last term as President,” Fenton said in his release, “but by 2017 I believe it will be time for someone else with a fresh set of eyes to lead our chamber.” 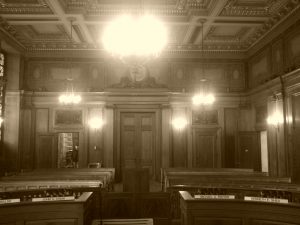 The Council will meet in December to infomally do what it will formally the following month. Pick a president. (WMassP&I)

Traditionally, the Council meets in an informal caucus in December to nominate the next president. The caucus allows compliance with state open meeting law, while permitting any members elected in November to participate, as Gomez and Ward 5 councilor-elect Marcus Williams will next month.

At-large Kateri Walsh had been rumored to be interested in the presidency. Another candidate, at-large councilor Bud Williams, unsuccessfully sought to lead the chamber this year and vows to fight on until the caucus. Williams’s plans to be president in 2014 were crushed when his longtime ally, Jimmy Ferrera, failed to win reelection in 2013.

The president presides over meetings and is usually the Council’s most visible member, a fact that can cut both ways as Ferrera learned. The president also appoints the body’s committees and is next in line should the mayor’s office.

Councilors like Twiggs, have feted Fenton for “professionalizing the Council” and indeed his reign has included substantive changes to the body’s operation and greater transparency. Meetings are now archived and accessible online. Rule 20, effectively Council’s (short-term) filibuster, was reformed. He has been preparing and laying out how the Council will approach the monumental task of reviewing MGM’s site plan. It is the first such site review the Council will do since rewriting the zoning ordinance in 2013. 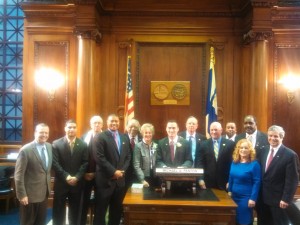 But Fenton also promised “aggressive” legislating during his presidency. There were major revisions to pawn shop rules, a casino ethics ordinance and nibbling around the edges of city employee residency, but other legislation has been limited. Admittedly, 2014, a non-election year for the Council, coaxed some sitting councilors into open state legislative races while drawing the rest into the fray in other ways.

Fenton’s third term as president, less likely to be sidetracked by electoral maneuvering, could provide him an opportunity to push the Council toward greater and more formidable oversight of Mayor Domenic Sarno’s administration.

Fenton had publicly toyed with running for mayor this year, but instead, to little fanfare, he sought reelection to his ward seat that covers Springfield neighborhoods wedged between I-291, the Chicopee border and Bay State Medical Center.