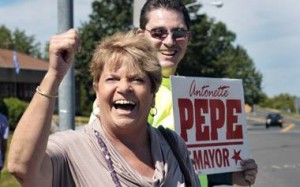 A week before the Springfield mayoral preliminary in 2011, at-large School Committeewoman Antonette Pepe had nothing to lose. In a three-way mayoral preliminary with incumbent Domenic Sarno and then-City Council President Jose Tosado, Pepe did not hold back, hitting Sarno on schools, finances and even the tornado that had touched down three months before.

Sarno had been campaigning on his tornado response, but Pepe countered it was private insurance and generous Springfield residents that had helped the city recover. “Stop taking credit!” she declared.

A seething Sarno shot back, “Ms. Pepe, you don’t know a damn thing!” For invoking the tornado like that, Pepe might have appeared the smaller person—figuratively, she was indeed the shortest candidate—but she backed her critique with property owners’ complaints about the city demolishing tornado-damaged buildings prematurely.

“When she committed herself, like when she ran for mayor, she was not willing—or able—to back down,” Tosado told WMassP&I.

“Antonette fought for what she believed in and what was best,” Karen Powell, a city activist and friend of Pepe’s, emailed. “We would often ask her why she couldn’t let something go and her answer was that someone needed help and she wasn’t going to let them down.”

Word spread on social media Tuesday morning that Pepe had been hospitalized Monday night and later died, prompting remembrances of her paraprofessional career, her tenure on the School Committee and, above all, her fire.

“I was deeply saddened to hear of her passing,” Springfield School Superintendent Daniel Warwick told WMassP&I in an interview. “My thoughts and prayers go out to her husband Russ and family.”

The Springfield Federation of Paraprofessionals, confirmed her death on Facebook. That announcement was first reported by Masslive.

Many tributes underscored her candor and outspokenness. “Antonette was as honest as the day is long, she was brave and fought fiercely for the things and people she believed in,” Maureen Turner, a former reporter for The Valley Advocate wrote on Facebook.

Anonette was a super lady. She used to sit nearby us in church–and always made sure to talk to my kids. She was… https://t.co/OloGVenaxG

Born Antonette Calvanese on April 14, 1941, she grew up in Springfield’s South End in a family of five. She told The Republican she had an abusive childhood, which sometimes prompted her to run away. She attended Cathedral High School, but did not graduate (she earned her GED in her 30’s and went on to STCC and Western New England). She married fellow South Ender, Russell Pepe, and raised a family.

A lifelong Democrat, she leaned right on some social issues and had crossed the aisle in recent years, yet on many city issues she sported solid social justice credentials. She sought city office several times, and served on the South End Citizens Council before moving to East Forest Park.

When her kids were grown, she began working as a paraprofessional or teacher’s aide in Springfield Public Schools, ascending the ranks of the union, like her husband had in the sheet metal workers union.

Pepe called out favoritism and graft, but also aggressively represented her members, leading rallies at City Hall to demand a fair contract. She served as the paraprofessional’s union president until her election to the School Committee in 2003.

Pepe brought her zeal—and salty tongue—to City Hall. Committee colleagues remember her as a tireless advocate for schoolchildren, some of the commonwealth’s poorest.

She also insisted city workers get a decent wage, “any time we were in collective bargaining negotiations with our lower paid employees,” Warwick remembered. “She was a real advocate for working people.”

Her tenure on the Committee did not want for divisive issues. From condoms in schools to side deals in superintendents’ contracts—both opposed—Pepe was never shy about her opinion.

“When she didn’t agree with you, she would let you know directly,” Warwick added.

Colleagues like Denise Hurst, Marjorie Hurst and Christopher Collins disagreed with the pugnacious Pepe, but appreciated her passion. “Honestly, we got off to a pretty rocky start,” Denise Hurst recalled, “but I always respected Antonette.” Hurst continued, “I think we ended in a really good place.” 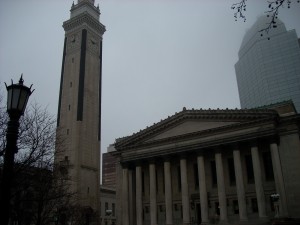 Pepe served in city government for 10 years, but her influence was felt for far longer. (WMassP&I)

Countless issues and initiatives had Pepe’s fingerprints on them, but her baby was the uniform policy. Enacted unanimously in 2008, Pepe achieved it despite early opposition from her Committee colleagues.

“I proceeded to go my own route,” she told The Valley Advocate in 2011, and built support from the ground up among administrators. “The School Committee said, ‘Holy moly, she’s getting the people to go along with the damn uniforms,’” she recalled at the time.

Pepe spoke out on issues that fell under the non-school side of the city, too. She criticized the School Department’s no-bid relocation to the former federal building. Two years later while running for mayor, she questioned the $1 sale of the former headquarters, claiming Sarno had promised the department’s move would ultimately yield a seven-figure sale of the old State Street building.

That criticism now seems prescient. Plans to redevelop 195 State Street required a save from MGM, after the original buyer did not deliver.

But while fans saw refreshing bluntness and honesty, critics saw her as “mouthy.”

In 2011, charges that she lacked the qualifications to be mayor fell flat given her School Committee tenure and union leadership (Sarno ran the South End Community Center and served on the Council before being mayor). However, her rap as a hothead probably weighed her bid down more.

“I’m not going to be a different person—I’m not,” if elected mayor, she told The Advocate.

Former Committee colleagues said then she was ill-suited to the consensus-building needed as mayor. Pepe denied the charge, while accusing Sarno of governing unilaterally himself. She lost the preliminary.

As mayor, Sarno, a cousin of Pepe’s, served on the Committee with her, but their relationship clearly seemed fraught. A spokesperson for Sarno did not return a request for comment.

By 2013, it had been six years since Pepe had won a competitive election. Her political capital was running low and her brand could not replenish it, especially among voters unfamiliar with her. Seeking reelection to one of the Committee’s two at-large seats, she fell behind her colleague Denise Hurst and the dynamic Calvin McFadden.

Pepe retired from public life. She was still visible and in apparent good health. “I would see Antonette in the community,” Warwick said, noting he lives near Pepe and her husband. “She was enjoying her retirement and I was happy for her.”

Tosado said he saw her a month ago and she looked healthy. Powell, still in disbelief, said she, Pepe and their husbands had dinner plans next week.

Besides her husband of 53 years, Russell, Pepe leaves behind three children, Michele, Sharon and Russell, a brother, Andrew, and several grandchildren. Services are planned for this Friday and Saturday.

For all the emphasis on Pepe’s ferocity, almost all remembrances highlighted her warmth and humor, which truly kindled others’ love for her.

“There will never be another Antonette Pepe and I will miss her terribly,” Powell said.