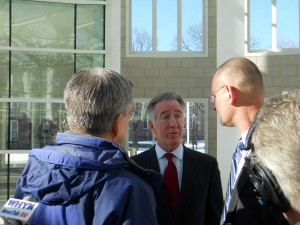 SPRINGFIELD—Spend enough time with US Representative Richard Neal, the dean of the Massachusetts US House delegation and it becomes clear he takes the idea of “What’s past is prologue” seriously.

Whether at Union Station or a Memorial Day wreath-laying ceremony, the former history teacher considers the present against what came before. From that perspective, it is unsurprising a pol who built a career in the tight, even insular realm of Springfield politics and touts nuts and bolts like Social Security, considers a foreign policy vote cast on October 10, 2002 his “proudest.”

That day, the US House of Representatives authorized President George W. Bush to invade Iraq. Neal voted no, putting him on the dissenting side of an issue that has defined the US in the 21st century and upset an already volatile Middle East. 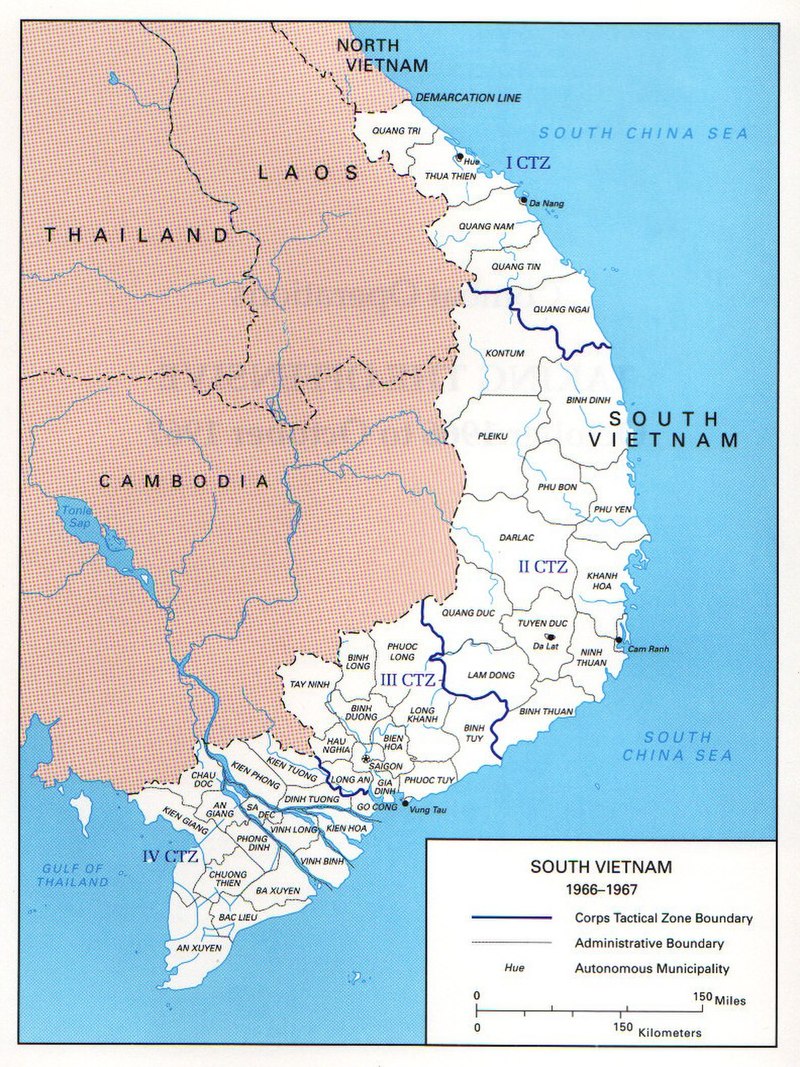 The conflict in Vietnam left a “reticence” to deploy US forces absent clear evidence such action was needed. (via wikipedia)

“I think that for those of us who grew up in the Vietnam era, there is a certain hesitance about the use of force,” Neal observed. During that war, which lacked a formal declaration, 58,000 American service personnel were killed. The US last formally declared war during World War II.

From conversations with supporters and former staffers, it is clear Neal’s thoughtful, even scholarly approach has served him well.

At a reception for the congressman in 2000, Bill Clinton said Neal “cares about how America relates to the rest of the world and whether we are a stronger, more secure, more decent country.”

During a wide-ranging interview on foreign policy in his district office earlier this fall, Neal said his interest in history dates to his college days.  Aides past and present have said Neal can talk about history and current events forever—or at least until his next appointment.

That temperament for getting deep into the details helped him thrive early in his congressional career and grow his standing within the House.

“His work on a whole range of issues is well- known and respected across the state and across the country,” Matthew Fenlon, a former Neal aide and current Executive Director of the Massachusetts Democratic party, said.

Though not a pacifist Neal has tended to oppose war. He supported removing Saddam Hussein from Kuwait in 1991, but voted against doing so militarily. 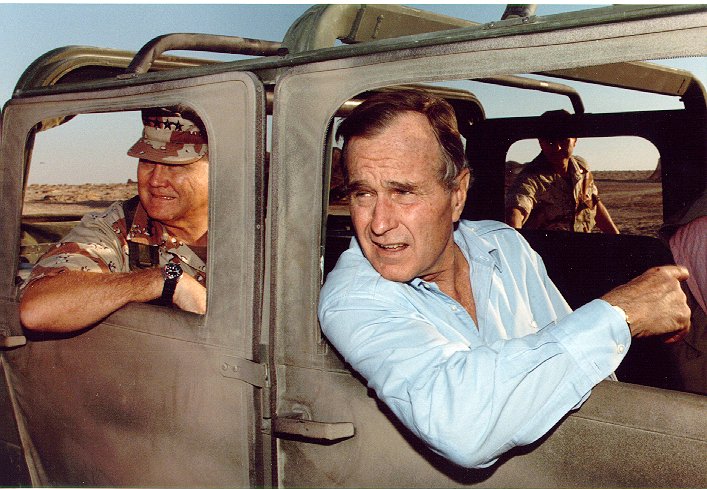 Though Neal voted against the first Persian Gulf War, he praised Pres. George H.W. Bush, seen here with Gen. Norman Schwarzkopf, for not invading Iraq after removing Hussein from Kuwait (via wikipedia)

“I thought there was substantial evidence that we could continue to disarm Saddam Hussein,” without war, Neal said. Still he praised the elder President Bush for resisting mission creep.

Quelling the chaos Daesh, also known as ISIS/ISIL, has caused in Iraq and in neighboring Syria can only be solved by international, multilateral efforts. Neal wryly noted the US has become unlikely bedfellows with Iran.

“A reminder that in international affairs, we can’t always choose partners,” he said.

Like many Democratic congressman, Neal was under tremendous pressure from President Barack Obama and Secretary of State John Kerry to back the deal.

Neal met with Kerry twice and discussed the deal with President Obama directly. He also met with representatives from AIPAC twice, including Glazer. 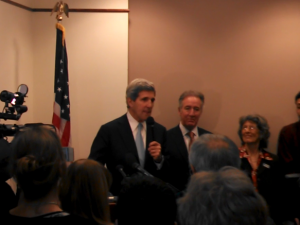 Even the deal’s top supporters knew Glazer to be a forceful opponent. Individuals consulted for this story heard that when Neal told Kerry, he had to meet with Glazer on the Iran deal, the Secretary of State, who knew her well from his presidential and senate campaigns, urged Neal to see Glazer first.

Given his tight relationship with Democratic leadership and the possibility that the alternative was armed conflict with Iran, Neal’s decision surprise few. Though, he averred his longtime support for Israel was not in question.

“I did not think it was practical to assume the American people would support regime change in Iran,” especially after Iraq,” he said. “The best path forward was diplomatic.”

While not commenting on the Iran deal specifically, Glazer appreciated the time Neal has offered her and others to discuss Israel. Praising Neal on global affairs, she said, “His votes and efforts on all foreign issues have made a difference for the whole country.” Indeed, she singled one of particular: Ireland.

At the time of the interview, Stormont, Northern Ireland’s seat of government, faced a crisis after resignations that undermined the Protestant-Catholic power-sharing arrangement.

Parliament Building on the Stormont estate in Belfast (via wikipedia)

The risks notwithstanding, Neal said things had vastly improved since the 1998 Good Friday Agreement, which are the only way forward.

“There are now two generations of young people who have grown up not experiencing sectarian violence,” Neal added. The days of watchtowers and 30,000 British troops stationed in an area the size of Connecticut are over.

Hailing from a historically Irish city like Springfield, Neal’s interest in the conflict is fitting, though he also said one of his grandmothers personally experienced the segregation common under British rule.

Since the State Department and London considered the issue internal to the United Kingdom, the push for a solution came from congressmen like Neal, Long Island Republican Peter King and Massachusetts colleagues like Joseph Kennedy II.

“Many of us objected to that position,” he said, which did not change until Clinton’s election.

British reluctance was compromised by a changing world.  Eastern Europe democratized, apartheid ended in South African and Germany runified and attention turned to, “the longest-running political dispute in the history of the Western world.”

“Many of us asked, correctly, when is Ireland’s turn?” he said.

Neal said Prime Minister Tony Blair was instrumental, but credited Blair predecessor John Major, for shifting the dialogue when he said the British government had no long-term interest in Ireland.

Unionists, like Ian Paisley and Peter Robinson, “had the longest walk to the bargaining table because they had to give up something.” In politics, “the hardest thing to do is to tell your most fervent supporters, they not going to get what they want.”

On November 17 the Republicans and Unionists reached an agreement on the most recent impasse. It did not solve everything, but it showed conflicts could be solved through Northern Ireland’s democratic representatives.

“It proves devolved government can work, consensus can be reached, and that politics is the only way forward,” Neal said on Facebook then.

Neal’s role in the talks, which Clinton feted in that 2000 speech, has elevated Neal within the national Democratic Party, especially within American Hibernia.

“It’s been great to see the people everywhere who appreciate the work he has done for our party and perhaps more importantly our country and our state at-large,” Fenlon, the former aide said.

The delegation has benefited too. For example, Seth Moulton scored a coveted seat on the Armed Services Committee, a coup for a freshman, even one with his military background. Many saw Neal’s influence as a factor.

The attacks in Paris, including at the Bataclan thater, pictured, refocused global affairs on Daesh, also known as ISIL/ISIS (via wikipedia)

But days before Stormont quieted down, Daesh and Syria stole the spotlight with the attacks on Paris, and later the San Bernardino shooting. However, no evidence has linked California the assailants in California to Daesh yet.

The Paris attacks aggravated the West’s response to the Syrian refugee crisis. Neal told WMassP&I he expected Congress would address the “humanitarian crisis” eventually, but in the short-term, refugees became a political hot potato.

While he never came out against settling of refugees in America, he told WWLP, “There has to be a considerable effort made in detailing many of the backgrounds of those who would come.”

Neal voted against a Republican attempt to require a near-impossible refugee review process that likely would have ended resettlement.

After Daesh ostensibly downed a Russian jet in Egypt, Neal said Russia could help solve part of the problem: Syria.

“I think that this is a wake-up call for Vladimir Putin,” he told reporters in Pittsfield. Putin, Neal hoped, would give up on Syria’s Bashar al-Assad and join international focus on Daesh.

In the weeks since the attacks, echoes of Neal’s apprehension about the use of force generally appeared in his continued opposition to ground troops.

He and his colleagues have several American conflicts in the Middle East to contemplate when considering military action there. The current efforts to rout Daesh may not have ended its reign of terror, but American boots on the ground are not a long-term solution either. Perhaps if more congressmen like Neal learned their history, the US will avoid repeating it.