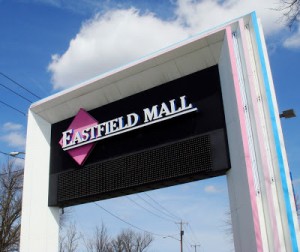 Followings today’s announcement that the Eastfield Mall Macy’s will close, it seems the death of the retail corridor along Boston Road is nearly complete. With Sears increasingly teetering over the edge, it is hard to imagine how the Eastfield Mall and the surrounding retail area can survive without major restructuring and reinvestment.

Eastfield has been near death before. Roughly 20 years ago, before the movie theater opened, the mall wasted away in the shadow of Holyoke Mall. The construction of the movie theater save it. For the short-term, the theater may keep what is left afloat, but this is no strategy. With countless storefronts vacant in the mall and many more along Boston Road, the city (and the mall’s owners) must immediately begin work on reviving what is the last significant retail corridor left in Springfield.

Originally built by Springfield’s landmark department store, Steigers, the building had housed a Filene’s until it was converted to Macy’s in 2006. 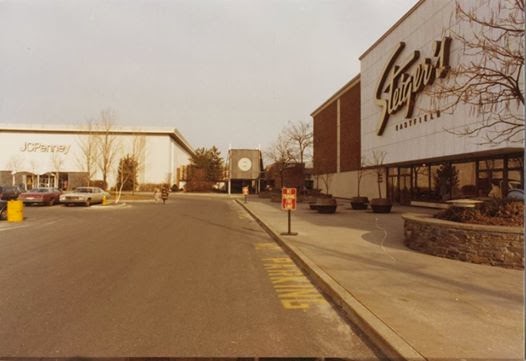 The closing Macy’s in its original incarnation circa 1980-1990’s. (via Hells Acres blog)

It is true that Springfield Plaza is slated for renovations, but it is not clear that its fortunes can be reversed. Five Town Plaza seems okay, but barely. The Hall of Fame area is mostly eateries.

Boston Road has a unique, underutilized asset: potential customers. Sitting on the border with Wilbraham, one of the wealthiest communities in the region, and near middle-class neighborhoods and towns like 16 Acres and Ludlow, Boston Road could become a key part of the city’s economy again.

However, it will require a forceful effort on the part of city government, namely the Planning & Economic Development Department headed by Kevin Kennedy.

Eastfield has long been the neglected stepchild of the city’s economy. Previous efforts to expand and grow the mall and the corridor were squelched or put on the backburner because downtown had to be fixed first.

Downtown developers and landowners with connections have kept too much focus there—despite the fact that almost no redevelopment plan has worked there either—to the detriment of neighborhood centers and retail strips like Boston Road. This must stop now.

Holyoke Mall: The (only) place to shop. (via Facebook/Holyoke Mall @ Ingleside)

It is reasonable to keep things in context. The entire region’s economic health is poor, not only Springfield’s. Thus, Holyoke Mall has rapidly become Hampden County’s primary retail hub. The Westfield Shops, Westside’s Riverdale area and Chicopee’s Memorial Drive have supporting roles. Only Enfield, despite its mall’s precipitous decline—both Enfield Macy’s stores will close, leaving the mall, like Eastfield, with Sears and a movie theater—has a concentration of retail on par with Ingleside in Holyoke.

Moreover, the Eastfield closure may say less about Boston Road and more about the companies closing up shop. Macy’s has had trouble of late. American Eagle and Radio Shack closed hundreds of stores alongside Eastfield’s. Five years ago Circuit City, which occupied a huge space at Boston Road and Parker Street, went belly up. Shopping is changing and shifting online, but that does not explain the region’s retail malaise.

I'm sad to see Macy's go. Eastfield mall is rapidly declining we are losing all the big stores…. https://t.co/vR6GOv9Std

We understand that Springfield’s economic development department is still heavily focused on MGM Springfield, but, whatever MGM’s promises—assuming they come to fruition—they will not alone resuscitate retail in Springfield, an essential part of a city’s livability. Resources must be devoted to working with all commercial landowners, not just well-connected ones, to revive and restore areas like Boston Road.

The reconstruction of Boston Road was a good start, but it probably came too late. Talk once was the city had hoped to lure Target to the area. It should not give up on attracting a large retailer like that, but it should make improvements, streamline processes and work collaboratively with neighbors like Ludlow and Wilbraham to bring businesses to Boston Road. In other words, the answer needn’t be only tax incremental financing deals. Retailers have to want to be here. They cannot be bought off or they may leave at the earliest possible chance.

Perhaps this news, which puts the Eastfield Mall, one of the Northeast’s first covered shopping centers when opened in 1967, at risk of becoming a dead mall, will shock City Hall into action. More importantly, while we know the casino is critical—and getting it right even more so—today serves notice of the risks the city faces for expending all of its energy on that megaproject downtown, however many zeroes are attached to it.