His Retirement Announced, Downing Buckles Down for Rest of Session… 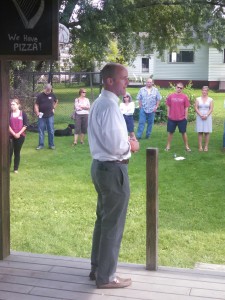 News that Senator Benjamin Downing would not seek a sixth term sent ripples throughout the commonwealth on Monday. Words of disappointment and gratitude flooded social media after Downing announced his plans, but the 34 year-old senator’s ambitions for the remainder of his term suggest he will not be slowing down in the months ahead.

Building on initiatives he has championed throughout his decade on Beacon Hill, the Pittsfield lawmaker will focus on legislation around energy—a top priority for much of Beacon Hill—and continue his advocacy for broadband Internet access. Downing will also be pushing for an expansion of transgender rights, following up on his past advocacy on this issue.

That Downing would emphasize energy and climate change seems fitting, especially since many of the tributes that followed his retirement announcement pointed to his work on those issues. In a phone interview, Downing said he expects comprehensive energy legislation this session, which will help the commonwealth reach state and federal carbon reduction and renewable energy targets.

“It is important we show federal regulators we have a plan in place to meet our energy needs that is consistent with our goals,” Downing said.

House Speaker Robert DeLeo has called for a large “omnibus” energy bill and Governor Charlie Baker has proposed legislation that would facilitate more hydropower from Canada.

Downing, who co-chairs the Energy Committee, has also advocated for raising the net metering cap—a limit on solar power incentives—which could get rolled into bigger energy legislation. Both the House and Senate approved net-metering bills, but have yet to agree on language.

Though he did not expect any bills in this area, Downing said he would continue to shepherd the expansion of broadband Internet access to the 52 municipalities he represents and beyond. Reliable, fast Internet access has long been one of Downing’s objectives, but he explained that securing it has been a “start and stop” process.

Some of it, he said, was out of the government’s hands. The internet service providers’ control of access—and the small incentives to connect low-population cities and towns—was one complication. That left the state to rebuild parts of the network serving the municipalities lumbering along with slowing connection speeds.

The Recovery Act filled in the gaps, but start-up time and the need for money later—a bonding bill last session has helped—delayed implementation further. Between now and 2017, Downing will follow the progress and help it through any hiccups.

“It hasn’t been as clean a process as we would like,” he said but hope it will be “One that is going to stand the test of time.”

Looking back, in addition to the broadband, Downing expected his work on improving higher education in the commonwealth and expanding transgender rights would form part of his legacy.

He expressed hope that the final piece of the transgender puzzle would come this year with the passage of legislation that would guarantee those individuals protections in public accommodations—like patronizing stores or visiting public venues, not only, as opponents claim, bathrooms. In 2012, Massachusetts outlawed discrimination against transgender individuals in employment.

The bill has ample Senate support, but less certain backing the House. Baker has opposed it so far.

Downing also noted the improvement in Massachusetts’s public higher education. Investments in academic institutions, such as the Massachusetts College of Liberal Arts in North Adams within Downing’s district, have improved the state of repair and reputations of Massachusetts’s colleges and universities after years of neglect by state policymakers.

“Hopefully, in this year’s budget we add to some of the good work we’ve done to turnaround the underinvestment in public high education,” he added.

Still, Downing sounded most upbeat about the initiatives Massachusetts undertaken—and will hopefully carry out this session—on the environment.

“Climate and clean energy is a set of policies that I’ll look back on and be proud of the role I played as part of a team that made Massachusetts a national leader,” he said.