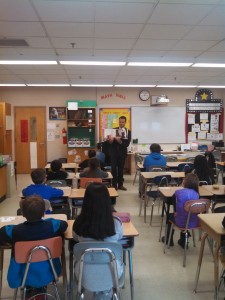 CHICOPEE—The image, especially in the social media era, is familiar: a politician reading to a classroom of children. Indeed, Senator Eric Lesser had actually read to students at Fairview Elementary School before. Taken in isolation such visits may seem somewhat unremarkable.

Yet visits like this one, organized by Link to Libraries, were just some of the 365 things Lesser did in 2015, according to a list his office compiled. In that leviathan listicle was actual legislation, an impressive feat for a freshman during one of Beacon Hill’s less productive years. That and efforts to build bonds with the municipalities Lesser represents have set the tone for his first term.

“It’s a really fun job. I wake up everyday and I’m excited about it,” Lesser said, despite the somtimes trying parts. “If you’re not a little frustrated, you should think about a different job.”

While campaigning in 2014, Lesser limited his focus to a few select issues like the opiate addiction crisis, cultivating high-tech and manufacturing jobs and establishing “high-speed” from Boston to Springfield. On all of these, there has been at least some incremental progress.

Lesser has also engaged and met with select boards and city councils throughout the year.

In an email, Hampshire County Register of Deeds Mary Olberding said Lesser keeps her briefed and has attended select board meeting in her hometown of Belchertown. “I knew he would work hard; that’s why I supported him!”

Chicopee at-large city councilor Frank Laflamme praised his willingness to discuss a range of issues, “I think he has a great open door policy.”

One person who worked with Lesser in Washington said he cares about the fabric of the community from big challenges like economic or opiate crises or something simpler like insufficient access to handicap placards.

If this reflects Lesser’s earnest mien, that he could shove policy through a particularly glacial Beacon Hill showcases his doggedness. As the Tourism, Arts & Cultural Committee senate chair, Lesser secured local cultural funding and his bill to increase the availability of Narcan, an anti-overdose drug, became law. 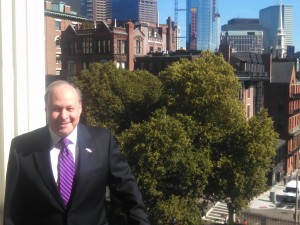 Massachusetts Senate President Stanley Rosenberg attributed Lesser’s successes to his ability to both persuade and listen to colleagues.

“He doesn’t try to dominate the conversation, doesn’t try to take credit for other people’s work,” Rosenberg said. “Those kind of characteristics position a member very well to get support.”

Washington colleagues have noted Lesser’s willingness to grind through the minutiae of politics and governing. “You learn pretty quickly that actually it is really hard work and a lot of it is not glamorous,” said friend Herbie Ziskend, who worked with Lesser in the White House.

During an interview in the modest blue conference room of his East Longmeadow office, Lesser also discussed the changes in his own life. He noted his graduation from Harvard Law School, his wife’s developing legal practice, and his daughter’s literal growth.

“It’s certainly been busy,” he said. “There are not a lot of young people or people with young families in the legislature.”

He explained his narrowly tailored agenda reflected an effort to improve livability in the region whether battling addiction or building ties—both the figurative and railroad varieties—to Boston. All go toward bolstering middle-class life in the 413, which, in recent years, “has been under assault.”

“There has to be a vision and a strategy of where we want our region to be,” he said.

Lesser called the closure the pharmacy-shopping loophole “the most concrete and most significant” actions last year, followed by the bulk purchasing of Narcan.

The Lesser agenda has not been entirely full-steam ahead, though. The Senate added his study of Boston-Springfield rail service to last year’s budget, but the House did not. The Transportation Committee is expected to review the standalone bill soon. Lesser and his aides have acknowledged this initiative is a multiyear effort, but progress is slow.

Despite state reluctance to invest amid cost overruns for projects like the Green Line extension, Lesser averred, “Even the most aggressive estimates for what East-West rail will cost are a fraction of what four-mile the Green Line is going to cost.” By comparison renovating the 55 miles of track needed for service to Boston could reinvent Western Massachusetts. The Green Line’s extension, whatever its virtues “would not have anywhere near that type of transformational economic impact.”

Amid Union Station’s redevelopment, new rail service to New Haven and studies about increased services across New England, Lesser was sanguine about getting the study and, ultimately, such rail service approved.

On economic development generally there are more tangibles.

From his perch on the Tourism committee—it is holding a hearing at Springfield’s Museum of Fine Arts Monday—Lesser has talked at length about the opportunities to grow the arts economy and Springfield’s cultural districts. During tours like the one with Israel’s Consul General to New England, Lesser feted the region’s economic assets including tourist attractions, factories and startup incubators.

Ziskend, currently Director of Public Policy at Revolution LLC, an investment firm focused on startups, observed that Lesser had worked on job growth before, having started as David Axelrod’s assistant at a time when 700,000 jobs were disappearing monthly.

“That was the initial work that Eric was focused on,” Ziskend said.

this is what it looks like when you’re the hardest working person in #mapoli – cc @EricLesser https://t.co/2pEHDHTXlm

Ziskend added that Lesser gets the startup economy, its potential and how regions have built startups around existing assets. “Eric understands that the world has changed and it is actually easier to launch a startup today.”

In terms of workforce development, Rosenberg noted that Lesser’s maiden speech in the Senate centered on training for precision manufacturing, something that resonated throughout the commonwealth, “That was a very big regional concern, but it is also a statewide concern.”

Friends make a point to highlight the contribution of staff. “I’d also have to give a lot of credit to his team,” one friend said referring to the mix of campaign staffers and Beacon Hill vets in Lesser’s office.

Ziskend said Lesser began his career doing true grunt work—carrying luggage—and empathizes with his staff’s hard work, “Eric was a staffer, he worked for politicians. He knows how to work with his team, help them grow.” 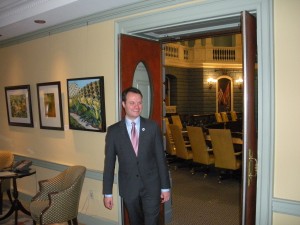 Going forward Lesser remains “laser-focused” on the skills gap, the substance abuse crisis and transportation, “That’s really where I’ve focused” and “we’ve been able to have demonstrable progress in all three of those areas as a result.”

Lesser’s responsibilities are set to grow, however. Rosenberg told WMassP&I the Senate has plans to reach out to Millennials, solicit their concerns, build legislation around them and better engage that generation in government. Lesser will be the Senate’s point man for this endeavor.

Then there is the next generation at Fairview Elementary.

Gail Baquis, Project Director for Link to Libraries which furnishes books to underprivileged children, told WMassP&I the goal is to instill a love of reading in kids early with a diverse roster of volunteers, “We try to pick readers from all walks of life she said.”

Before reading a book about Susan B. Anthony, Lesser asked the students about laws, who his boss was—“all of you”—and what his job as senator was.

“Boss of the schools?” said one fourth grader.

“Not quite,” Lesser chuckled.