Just the facts, ma’am? (via Twitter/@spd_hq)

Caving to withering criticism from the media, the City Council and residents, Springfield Mayor Domenic Sarno has released preliminary data from his police complaints board. The Community Police Hearing Board is required under Sarno’s 2010 executive order to file annual reports, but has failed to do so for the past two years raising questions about the city’s commitment to the review board.

Already criticized for lacking the teeth to discipline police directly—that power lies with the Police Commissioner—the omission of reports for two years was another black eye for Sarno’s management of the city amid controversy over other boards and commissions. City officials including Solicitor Ed Pikula had blamed staff shortages and the attention MGM required for missing reports, but that appears to have changed given today’s announcement.

The data released shows a decline from 2014 to 2015 among complaints, referrals to the commissioner and discipline meted out. The findings have been termed “preliminary” and could be expanded upon as the information is review further.

“The statistics show CPHB is helping to ensure that all complaints are investigated thoroughly and fairly and has prohibited any complaint from being ‘swept under the rug,’” the mayor said according to the press release.

At first blush, the data released seems less comprehensive than what has been included in past reports, which have included the number of internal situations/complaints requiring review. Today’s release makes no reference to complaints/disciplinary proceedings initiated within the department.

An email to a mayoral spokesperson requesing internal complain information for 2014 and 2015 was not returned as of posting time.

Council President Michael Fenton, who in a recent press release blasted Sarno’s management of boards and commissions, including the police complaint board, told WMassP&I he had yet to review the preliminary data and would decline comment for now.

The two-year absence of the annual review was first reported by Masslive.

In 2014, the board rendered opinions in all 183 cases it reviewed. In 2015, there were recommendations in barely more than half of the 141 cases taken up. Police Commissioner John Barbieri and his predecessor William Fitchet, who retired in 2014, accepted the board’s recommendations in all but six cases between both years.

“The CPHB review of each complaint consists of individual members of the CPHB taking time to visit the Police Department and review of every single citizen complaint received by the Police Department, with a recommendation for whether disciplinary charges should be initiated,” Denise Jordan, the mayor’s chief of staff and liaison to the board said in the press release.

Jordan also said the board also acts as a hearing board to comply with civil service laws as needed. That lends a slight impression of legitimacy to a board that has been criticized and mocked as impotent and unable to develop trust among city residents, particularly Springfield’s minority communities.

However, those criticisms are more complicated than that. Many critique leaving discipline in the hands of the commissioner, himself a lifelong city cop. Nevertheless, Barbieri has taken great pains to express his commitment to bringing wayward police to heel. 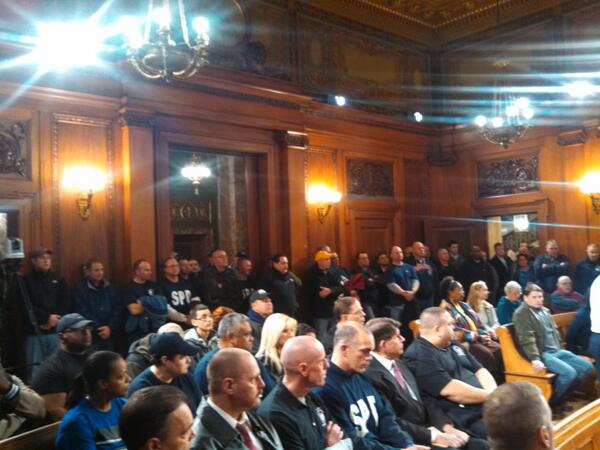 A Council chamber packed with cops in 2014. (WMassP&I)

Officers and their union have also expressed little trust in the board’s ability to handle internal issues. The implication has often been that resolution of internal issues is limited to superior officers’ discipline of subordinate ones with little opportunity for rank and file cops to raise their concerns.

In his press release, Sarno also stated his intent to redraft his executive order for the board to have it draw information off of the department’s own crime analysis bureau. He also said he was ordering the Law Department to release this review annually as required.

Sarno did not wade into the controversy over the composition or strength of civilian oversight in his release, but did make allusion to the fact that residents were included in the process. In the past, the mayor has also argued that this model of civilian recommendations being submitted to the top cop removed politics from the process and was the path most communities were charting. The former is subjective and there is little evidence to support the latter.