Analysis: Rising from the Ashes, a New Sheriff’s Race?… 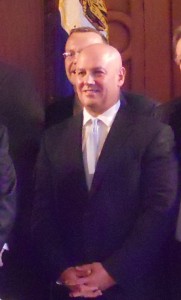 Campaigns are not static. As the field gels they change, but even after it is set, elections can remain fluid. Look no further than this year’s presidential race. Republicans are in chaos, having abandoned their post-2012 reboot, and, while Hillary Clinton’s nomination seems near-certain, her path has hardly stuck to the script.

At the moment, Springfield City Councilor Thomas Ashe’s entry into the sheriff’s race has likely not upended Hampden County Jail Assistant Superintendent Nicholas Cocchi’s frontrunner status. Ashe’s bid does scramble the field, laying the groundwork for the dynamics to change ahead of the primary.

Ashe, a four-term at-large Springfield city councilor, is the fourth Democrat seeking to succeed sheriff Michael Ashe. Shortly Sheriff Ashe’s declared in 2014 he would retire in 2016, Cocchi, a top Hampden corrections official, kicked off his bid. Since then, Jack Griffin, a former Connecticut corrections official, entered the race as did governor’s councilor and ex-Springfield mayor Michael Albano.

James Gill is running as an independent.

The councilor and sheriff are not related.

Ashe’s announcement was sudden, but hardly surprising. While Cocchi has secured broad support, much of Springfield’s reform movement and establishment has stayed on the sidelines (Cocchi has not really contested the city yet either). Rumors that Hampden Clerk of Courts Laura Gentile would run have been rampant, but Councilor Ashe had been a potential candidate since Gentile beat him in 2012’s primary.

Announcing Friday night at his annual St. Patrick’s Day fundraiser—until recently, one of the few such events in Springfield Hibernia—Ashe drew on his roots in Springfield’s historically Irish neighborhood.

“In many ways it is fitting that I make this announcement on the heels of St. Patrick’s Day in this club,” Ashe said referencing the venue, the John Boyle O’Reilly Club. “For a kid from Hungry Hill, it could not be more appropriate.” 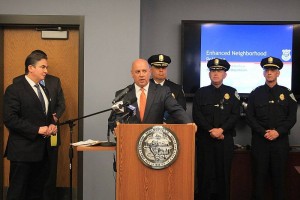 With much of that community decamped to the ‘burbs, such nods to history and “the Boyle” can resonate outside the city. Of course, Springfield residency and its politics can be a negative among those who have fled the city, too.

Another double-edged sword Ashe will confront is his name. Many, but not all voters may associate him with Sheriff Ashe. That is a positive for Councilor Ashe among voters who think highly of the sheriff. However, those upset by the sheriff’s Western Mass Alcohol Correctional Center relocation process may also pass along their displeasure to the like-named candidate.

Few are underestimating Ashe, though. “One thing that people will look at in a positive sense is that he is resilient,” a Valley political observer said.

Unlike his Clerk of Courts bid, Ashe can tap into voters’ preference to elect experienced individuals to esoteric countywide positions, given his past career at the Hampden and Worcester sheriffs’ offices.

It is not clear his experience can or will outdo Cocchi’s, but Ashe can argue his qualifications are not solely political, a problem a candidate like Albano must overcome.

Moreover, the “experience counts” bloc of voters is unlikely to split between Cocchi and Ashe—and thus hand the election to neither—the way geographic blocs, like Springfield, can. Ashe’s Achilles heel in 2012 was splitting his hometown with Gentile, who touted her experience in the Clerk’s office.

However, Gentile outmaneuvered Ashe beyond Springfield. He is unlikely to allow that to happen again.

While Ashe had Ward 2 Councilor Michael Fenton, who represents Hungry Hill and Atwater Park—one of Springfield’s major political nodes—on his side four years ago too, the 29 year-old now-Council President, has more reach across the Pioneer Valley.

It would not be unreasonable to see some of the newer blood in Hampden County’s ex-industrial cities also backing Ashe, such as Holyoke Mayor Alex Morse who attended Ashe’s kickoff.

Ashe has been a reliable ally of Springfield Mayor Domenic Sarno’s and were he to back Ashe, it would be a rare and potent union of the city’s establishment and opposition (i.e. Fenton).

The other contenders remain formidable, especially Cocchi. Sheriff Ashe has all but put his political muscle behind his assistant superintendent. Cocchi has raised considerable contributions and union support.

Griffin possesses an impressive personal story and his own deep history in corrections and public safety. Albano sports a diehard core of supporters whose fervor and willingness to engage in political hand-to-hand combat cannot go unappreciated.

Of course the sheriff looms large over the entire race.

“Even though he is not here tonight, I want to publicly acknowledge the amazing career of the finest sheriff in the land, Sheriff Mike Ashe,” the councilor told supporters Friday, which was also his 50th birthday. “I had the honor of working for Sheriff Ashe for close to a decade and I can tell you that there is no one more committed to their work than Mike Ashe.”

Injecting realpolitik into his pitch, Ashe added that none of the sheriff’s would-be successors have the same clout in Boston. Whoever wins will be doing more with less.

Rather Ashe offered himself as an experienced transitional figure. He noted his career started with a summer gig at the former York Street jail at 19. He later worked nights for Worcester’s sheriff while attending Assumption College. A series of posts in both counties followed.

Ashe is now a senior vice-president for the YMCA of Greater Springfield.

He also touched on School Committee and Council service. While Ashe’s six-year chairmanship of the Public Safety Committee is partly owed to the political considerations of the prevailing council president, that committee is among the more productive.

Ashe recognized Sarno and other city political figures, but he is not just following Springfield’s outdated playbook of bowing before political altars.

Campaign finance records show he has sunk $15,000 into polling. Ashe retained David Paleologos, the director of Suffolk University’s polling center. While Paleologos has polled Pioneer Valley campaigns before including mayoral races in Holyoke and Springfield, his client base is statewide.

Kicking off his bid on his annual St. Patty’s funder may prove wise. According to the last report before Friday, polling had cleaned out Ashe’s campaign account. For someone who rose up in a political universe known for its caution, dropping 15 large on a less than a sure thing suggests only one thing. This is a serious bid.