This post is part of It’s Working, an occasional series on labor and employment issues. 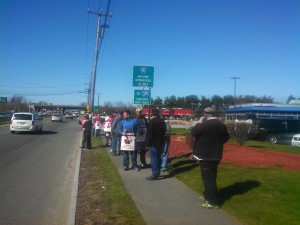 SPRINGFIELD—The horn of a Magic Hat brewing truck roared as it thundered through an older part of downtown. Another brief blast sounded as the truck looped around Chestnut Street and back down Bridge Street, signaling the driver’s support for the Verizon workers picketing outside the central office next to Stearns Square.

“There were a lot more honks than fingers,” one striking worker, who declined to give his name, said.

Such gestures offer a hopeful note for Verizon workers who have been on strike since last Wednesday, after working without a contract for 10 months. The action, the largest strike in the US in years, involves approximately 36,000 employees across the company’s landline division and a few in its wireless stores and has come to reflect broader economic concerns across the economy.

Plain old telephone service or POTS—a real term—has been in decline, but it forms the basis of Verizon’s landline division. Though Verizon has expanded its high-speed FiOS service, it has not done so at the pace many had expected. Rather, the lion’s share of Verizon’s billions in profits and revenue have come from the company’s wireless division, which is overwhelmingly nonunion.

In the current dispute, Verizon wants to pare the costs of its landline division and increase the flexibility of how that workforce is deployed, perhaps even outsourcing its work. The unions argue the immensely profitable company can afford to maintain pensions and job security. Labor has also called for more investment in Verizon’s landline business, which runs from Massachusetts to Virginia.

Unionized Verizon workers are split between the Communication Workers of America and the International Brotherhood of Electrical Workers.

The strike has become a rallying cry for labor, which, despite gains in recent organizing efforts, has faced a decades-long decline in the private sector.

The entire labor movement is with you, Verizon workers. #StandUp2Vz https://t.co/rOqFUFAXoU

To respond to the changing economy, Verizon has argued for flimsier job security rules—which could yield more outsourcing—and the ability to transfer workers to assignments away from home for months at a time. Perhaps in a preemptive move during the lead up to the strike, the company claimed the average worker makes $130,000 in wages and benefits, a figure the unions vehemently denied.

“Verizon will throw around a lot of numbers and I can assure you that there are many employees not making anywhere near the kind of money that Verizon claims,” IBEW national spokesman Mark Brueggenjohann told WMassP&I in an email. 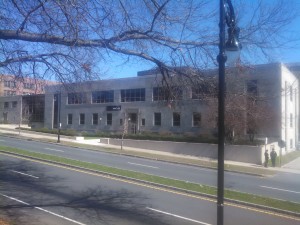 Verizon’s State Street office in Springfield, which the company has tried to sell in recent years. (WMassP&I)

The decline in the landline workforce is undeniable, Verizon and its forebears, Bell Atlantic, NYNEX and New England Telephone were once among the largest employers in the 413. Some decades ago, they employed several thousand Western Massachusetts workers. Today, according to The Republican, they number less than 350.

Figures about the stoppage show the decline in, ahem, striking detail. In 2000, a strike at Verizon’s regional forebear, Bell Atlantic, included 80,000 workers. That represents a decline or more than 50% employment in the wired business in just over 15 years.

Consequently, while a dozen employees were picketing the Worthington Street office last Thursday with a few more picketing the State Street office, in West Springfield, a ribbon of red-shirted workers lined a stretch of Route 5 outside the Verizon Wireless Store. Similar pickets have been established at South Hadley and Springfield stores.

It would appear even Verizon’s unionized workforce realizes the wireline business is merely a legacy asset of the telecom giant. But that is not quite right. 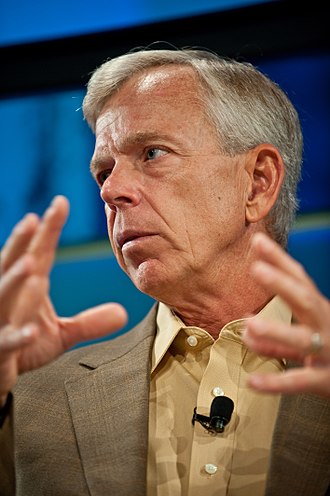 Verizon CEO Lowell McAdam, attacked Vermont Senator and Presidential candidate Bernie Sanders for wishing to make economy the way it was, comparing his company’s needs for change—and the unions’ resistance to them—to those of the auto industry.

“But nostalgia for the rotary phone era won’t save American jobs, any more than ignoring the global forces reshaping the auto industry saved the Detroit auto makers,” McAdam wrote on LinkedIn.

That analogy is inapposite, however. Ironically, McAdam’s critique of Sanders vis-à-vis the Detroit automakers, has some merit: automakers did not adapt to changing markets and consumer tastes. But this notion doesn’t apply to Verizon. The telecom company has new businesses, like FiOS it once emphasized, in its landline department. Lately however, it has been spending its money shopping for media companies like The Huffington Post and Yahoo.

Indeed, ahead of the strike, Verizon also made a big announcement. The company faced pressure over it its slow roll-out of FiOS. The company claimed it had met its broadband obligations, but it seemingly all but abandoned growing the service.

Then Verizon announced plans to finally bring FiOS—which includes cable and phone service—to Boston. As FiOS has come to represent a huge part of landline business—which remains profitable—the prospect of expansion would suggest reason to keep jobs close by, a key issue for the unions. 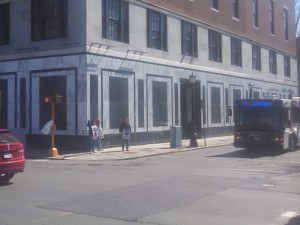 Even if the strike settles favorably to both sides, FiOS is unlikely at Western Mass facilities like the Dwight Street office. (WMassP&I)

While expanding FiOS to Western Massachusetts could certainly be a potential boon to the economy—and foment competition with the monopolies the cable companies have—that seems less likely. The lack of density outside the core cities, which are also far poorer than Boston proper, likely forecloses that for the immediate future. However, call centers and support staff could still be based here.

Picketing workers downtown, speaking off the record in deference to their local, observed that the wired business plays a role in the operation of the Wireless network. Calls routed through the mobile division’s towers utilize landline trunk networks. John Rowley, IBEW Local 2324’s business agent, confirmed as much to The Republican, however.

Thus the picket of the Wireless stores seems to make even more sense. Since CWA successfully organized a smattering of Wireless stores—the company never agreed to a contract with the unionized employees therein—it became legal for the unions for formally picket the stores.

Anecdotes suggest customers reconsider entering wireless stores after a polite chat with picketers. The unions’ Verizon action newsletter claims sales have plummeted at Verizon stores. Sympathetic organization have asserted the same. There also the risk that agitated wireless employees could join their colleagues at other stores and unionize.

One week into Verizon strike & sales are down, customer complaints are up.
The strike is working & beautiful. Respect the line! #StandUp2vz

It is hard to estimate how long the strike will last or whether the economic pressure on Verizon’s businesses will force it rethink its demands. Though Verizon has trained managers and support staff to fill in for the striking workers, customer service is likely to be impacted. The public relations campaign geared toward the wireless stores may also land on fertile territory.

Implying consumers may have little sympathy for a company making billions in profits a year, one worker at the downtown picket wryly noted, “People look at their cell phone bills every month.”