AGAWAM—Hoping to capitalize on presidential-level turnout and Democratic discontent about the incumbent, Southampton Democrat Jerome (J.D.) Parker-O’Grady kicked off his campaign for State Senate here surrounded by friends, family and a coterie of local officials. He faces a long road to the State House, but Parker-O’Grady’s family connections could help as he builds a credible challenge to Westfield Republican Senator Donald Humason.

Though it has slid further to the right over the years, Agawam Democrats were out in force at the campaign launch, held in the event space of Kaptain Jimmy’s, a nautical-themed restaurant and bar here. Winning over the suburb will be essential for Parker-O’Grady to overcome the structural advantages Humason enjoys in his hometown and adjoining communities. 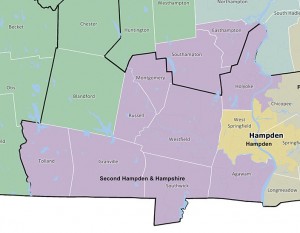 The son of attorneys with deep ties in local legal circels, one who of whom is now a District Court judge, Parker-O’Grady comes into the race with a bit more access and connections than your average first-time candidate.

“It’s something I’ve wanted to do, something I think I would be very good at,” Parker-O’Grady told WMassP&I in an interview.

In his remarks, Parker-O’Grady, a law student at Northeastern University, noted his experience from driving a truck for a Southampton brewery to working as field organizer for Barack Obama in New Hampshire.

One part of Parker-O’Grady’s resume does stand out. Students currently enrolled at a Boston-area law schools and former Beacon Hill staffers are nothing new to Pioneer Valley politics, but the young candidate also worked in the Boston office of Humason’s predecessor: Michael Knapik, a Republican.

At this stage, Parker-O’Grady, 31, is still fleshing out his platform, but he told WMassP&I that opiates, economic development and education were among his priorities.

Though he praised the opiate bill Gov. Charlie Baker signed last month, he added, “I don’t think it goes nearly far enough.” Specifically, Parker-O’Grady expressed concerns that traffickers of fentanyl and heroin and the demand side of the crisis have not been fully addressed. “We need more [treatment] beds,” he added.

Bill focuses mostly on curbing supply, but demand for drugs still exists and availability of proper treatment programs can address this.

Parker-O’Grady also weighed into the charter school debate. Noting he had attended a presentation on public education in Easthampton, he said he did not oppose raising the charter school cap, but only if the funding formula did not undercut traditional public schools.

Presently, Parker-O’Grady is the only Democrat to step forward to challenge Humason. Republicans have held the seat since 1994.

Out of office, but former Senator Mike Knapik’s legacy continues to echo. (via wikipedia)

A year later, Holyoke Patrolman (now Police Sergeant) Patrick Leahy, presented Humason with a spirited challenge. However, even after drawing strong margins in Easthampton and Holyoke, the Democratic vote sinks in the district, Leahy could not best Humason’s strength in Southwick and Westfield.

Though increased Democratic turnout across the district will help Parker-O’Grady, he is only just introducing himself to the district, one in which Humason can sometimes seem ubiquitous. Much work lies ahead for the young candidate.