Falling from the Fourth Estate of Grace in the Valley?…

This post is the first in a series on the state of media in the 413. 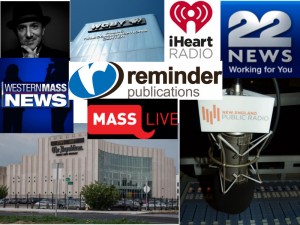 The economic crisis throttling media has hardly bypassed the Pioneer Valley. Big papers like The Republican have thinned considerably. Television news continues its drift to sensationalism. Alternative papers struggle, though have hung on better than those in Boston and San Francisco. One small respite, radio, suffered a blow when WHYN’s parent company, iHeartMedia, cancelled The Adam Wright Show earlier this month.

Local media diminution and consolidation is nothing new. The region’s insular, well-connected press barons perhaps contributed to Springfield’s political, economic and fiscal crises by insufficiently scrutinizing municipal leadership. Yet, the recent wave of cutbacks and mergers (and possible sales) threatens a key part of Valley life and what oversight the region’s Fourth Estate does provide.

The cancellation of Wright’s show, was only the latest media upheaval. Earlier this year, The Reminder, a weekly community paper, merged its regional editions into one. Last year, Meredith Corporation, the owner of CBS-affiliated WSHM—the Springfield satellite operation of Hartford-based WFSB bought ABC-affiliated WGGB. 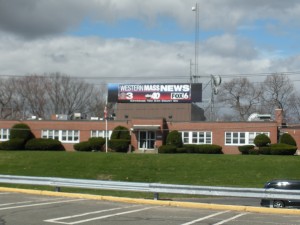 The television landscape may face more quakes. NBC-affiliated WWLP’s owner, Media General, begged off a merger deal with Meredith, but it accepted another offer from Nexstar. Though a sale may not be imminent, a change in WWLP’s ownership worries local media watchers.

“WWLP is run by people who live here. The boss lives in Springfield,” Anthony Cignoli, a political and media analyst, said, referring to WWLP General Manager William Pepin. New owners may go in a different direction.

Television news has faced criticism both culturally—e.g. Don Henley’s Dirty Laundry—and from locals about specific stories, but WWLP coverage of community events is part of its ratings dominance, well over half of the market by some estimates.

Other than monetary considerations, it’s less clear what iHeartMedia was thinking when it cancelled The Adam Wright Show, the successor to similar programs on WHYN’s AM 560. 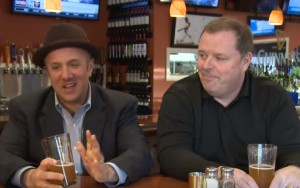 “After achieving the highest ratings on the station in more than 10 years, unfortunately iHeart Media today in a cost cutting move cancelled our show,” Wright wrote also thanking his cohosts and listeners for their support.

The Boston area president for iHeartMedia, WHYN’s owner, Sean Davey said the move was about the product replacing Wright and his cohost Bo Sullivan, not the broadcasters themselves.

“It was not about Adam and Bo.  It was about Jim and having a product that matched the market,” Davey told The Republican, referring to Jim Polito whose Worcester-based show will now air on WHYN. A former reporter for WGGB, Polito will broadcast from Springfield occasionally according to Davey. 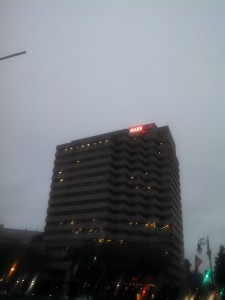 Masslive is based at One Financial Plaza, down the street from The Republican‘s building at Main & Liberty Streets. (WMassP&I)

Other media trends are more ambiguous. Masslive’s aggressive statewide expansion in Worcester and Boston has borne some fruit. Originally merely the digital portal for The Republican, Masslive has become a distinct media entity in line with owner Advance Publications’s strategy of building online newsrooms that partner (and compete) with their print counterparts.

Compared to the labor discord at sister paper The Plain Dealer and its alter-ego, Cleveland.com, no internal strife or disputes about cross-publishing have gone public in Springfield. Stories written by Masslive and Republican reporters regularly appear in the other’s mediums.

Masslive’s earlier statewide investments led some to fear it would skimp on adding local reportage. That has not happened. Instead, it has developed its own sometimes aggressive voice much to the surprise of denizens of 36 Court Street, for example.

However, a question mark hovers over Masslive. Advance is privately-held, thus Masslive’s financial health—and that of The Republican—and the long-term viability of its expansion is not public.

Other print products in Greater Springfield are going through their own transformations. The Reminder consolidated its regional editions and switched to a tabloid format. While the tabloid format has earned some plaudits, fewer editions means fewer stories overall. The newsroom is said to have thinned, too.

Cignoli, the media analyst, said this consolidation and retrenchment helps people in public relations, but not necessarily the public, “It is even easier to affect a campaign, affect the public consciousness.”

Even blogs and guerilla journalism have been at a low ebb. Springfield-centric blogs like The Springfield Intruder, On Springfield, which The Valley Advocate published, and Urban Compass faded after their authors moved on.

Regional press has little presence here, too. The Globe relies on freelancers as needed and the Associated Press no longer has a Springfield bureau. The news cooperative did not respond to an email inquiring about its absence from the 413.

It has not been all gloom and doom. Media in Northampton from The Daily Hampshire Gazette to WHMP maintain an interest in Hampden County, including Holyoke. Meanwhile, New England Public Radio, WFCR’s radio network brand, has invested in its news operations.

As legacy media withers across the country, John Voci, Executive Director of Programming at NEPR told WMassP&I, “You often find it is the public radio station that is covering the story.”

Last year, the public radio station started a weekly roundup of national and local news, The Short List—WMassP&I Editor-in-chief Matt Szafranski is a recurring panelist. NEPR interviewed mayoral candidates across the region during election season and expanded to Berkshire County.

Voci said a private funder provided the money for NEPR to expand its presence further into Massachusetts’s western frontier. According to Voci, from his Pittsfield base, Berkshire reporter Adam Frenier has developed local ties to better report on the region. Frenier’s Berkshire reporting has ranged from Pittsfield city politics to environmental reporting on pipelines and the Housatonic River cleanup.

Still, regionally, the trend is toward less media.

Ideas such as Internet radio station, like the one The Boston Herald has built, have circulated on social media. Startup funds have yet to materialize but challenges transcend initial investments.

Outlets dominant in their media like WWLP are probably secure given their access to national and political advertising, but the region’s weak economy, fewer small businesses and winnowing big local companies compromises the ad-based journalism formula.

Until a new funding method is discovered, the region will find itself relying increasingly on alternative models like nonprofits or volunteers and citizen journalists to get some of if not the whole story.