Analysis: The Tornado As Opportunity for Springfield…Even 5 Years on… 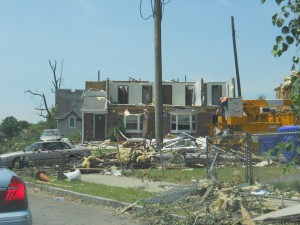 Damage near Walnut and Hickory shortly after the June 1, 2011 tornado. (WMassP&I)

Two emotions have generally defined the five year anniversary of the tornado that touched down in Western Massachusetts. There is somber reflection, whether for the dead or in the form of thanks for surviving. In the alternative there is a vein of almost euphoric optimism, particularly in Springfield, that acts as if nothing but ashes and memories remained in the city on June 2, 2011.

While the first is only natural and appropriate, the latter elides or outright misses the breadth of the June 1 tornado’s impact on the city. In tearing through neighborhoods, homes and schools, the storm ripped off the unhealed scabs covering Springfield’s infrastructure, policy, direction, finances and, most importantly, its inequality. In doing so, the city was presented with a grand opportunity. It is unclear if the city has realized that chance as the results have been mixed.

From a raw rebuilding perspective, the city has rebounded. Virtually all of East Forest Park has been rebuilt. Even the poorest affected areas, which saw hundreds left homeless, look bright and new.

Yet, both within the context of the tornado’s path and without, the revitalization has not brought the city much further than it was before the celestial funnel touched down.

Exposing the raw vulnerability of renters in the poorer areas hit versus insured homeowners could have spurred a nuanced conversation about Springfield’s poverty. The flow of federal money, though hardly wasted, may have been better used for critical infrastructure rather items on the political Christmas list. 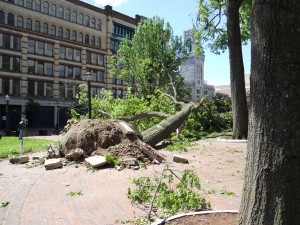 No better example exists than the new senior center. However inferior and outdated the city’s central senior services facility downtown may be, it still seems odd that a new facility in Blunt Park was given priority over projects like restoring dams that protect Bay State Medical Center. Alternatively, the very parks about which councilors today lament might have been upgraded.

Instead politicians bowed to the demands of a vocal voting bloc (seniors) who envied Chicopee, Holyoke and Westfield’s new facilities like some might covet the rock on a Kardashian’s finger.

Public input was solicited about spending federal dollars, but outreach has never been the city’s strong suits. The aftermath of a natural disaster may have been an excellent time to reverse that and engage the people rather than sit back and expect them to (metaphorically) come to City Hall.

Retrospectives about the tornado anecdotally note the city’s failure to work with and reach out to some victims. The city also fought a largely underreported battle in federal court over demolishing storm-stricken properties too quickly in the immediate aftermath of the storm. The city’s deft legal team won, but that only saved the city from an expensive judgment, not a gap in credibility.

Mayor Domenic Sarno deserves credit for his uninhibited advocacy for Springfield, an asset that no doubt helped secure recovery resources. Even when his enthusiasm seems overwrought, it portrays his conviction in his job.

But while wrapping himself in the storm in 2011 was understandable, in 2015 running for reelection, Sarno selectively noted that tornado funds, rather than his munificence, were delivering popular projects

Indeed, while Sarno has recognized them, it is the city’s fiscal team and especially US Representative Richard Neal who secured the considerable federal largesse Springfield received after to the storm.

The (soon-to-be) rise of MGM is another example of misplaced tornado emphasis. Structures damaged or gutted by the storm will be replaced by or incorporated into the casino, but there is no guarantee the facility will finally resurrect the struggling South End. Empty lots left in the tornado’s wake outside MGM’s footprint go undeveloped, while storefront landlords futz with jacked up rents in the hopes of scoring a high-paying tenant. None have materialized yet.

It would seem the opportunity to reassess how the city sets priorities, communicates with its residents (and vice-versa) and engages its politics has so far gone unrealized. Cathedral High in its early years. Will the new high school, Pope Francis High, face the issues that threathed Cathedral or receive the support it needs to thrive? (via Google image search/ancestry.com)

Cathedral High School’s destruction, a city institution and citadel of the city’s Catholic populace—especially the political elite—is a microcosm of the city’s challenges. Far from a single precipitating cataclysm, the tornado was the final blow to a school a dwindling diocese could no longer afford (and less often serving the poor and immigrants, an original mission of Catholic education).

After numerous scares, starts and stops, a school does seem destined for Surrey Road. Its future will remain in doubt unless and until the very alumni that rallied to save Cathedral pony up and provide the funds to preserve the school as an independent institution.

The parallel to Springfield as a whole is that cheerleaders for the city must supply more than words to ensure its survival, revival and growth. Friends of Springfield must innovate, participate, converse and involve themselves beyond their isolated quarters of the city.

In that sense, the work of recovery is anything but done. That also means that any talk of failure premature. Turnarounds have sprung from the tornado already.

The new Elias Brookings School while under construction (via springfield.edu)

Early on, it looked like wealthier East Forest Park was getting attention at the expense of Maple Height/Six Corners. However, the gleaming, new Elias Brookings School, funded with state dollars, provided a new anchor near the old Watershops Armory. Not far away, new homes are sprouting along Central Street. While a traffic realignment remains controversial, there is also talk about restoring the Mill River’s hydropower capacity using other federal disaster preparedness funds.

Such attention and investment in this area would have been politically unthinkable five years ago. If similar attention beyond the odd playground, street resurfacing or, conversely, wrongheaded intersection reengineering were plied into areas throughout Springfield, perhaps long-suffering Gerena School might be replaced or people, rather than cars, could become the focus of neighborhood centers.

Springfield’s leaders and unrelenting boosters often like to cast the story of the city as a tale of redemption. History has shown it to be the star of a Greek tragedy, eternally hampered by leaders’ hubris and residents’ indifference. The tornado was an opportunity for catharsis. Five years later, it still can be.