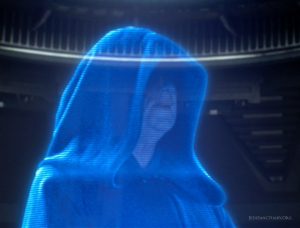 Hitting  the airwaves near you! (via Google image search/Lucasfilm)

Sitting on nearly $100,000 accumulated via stingy spending, Governor’s Councilor and ex-Springfield Mayor Michael Albano appears poised to open the floodgates on behalf of his bid to become the Democratic nominee for Hampden Sheriff. Much like his mayoralty, Albano’s campaign has been suspenseful, colorful and over-the-top. Exhibit A is his self-produced campaign “ads” in which he has attacked media figures and his opponents, feigned a Morgan Freeman voiceover and rewritten his history as mayor.

Whether these videos will become actual television ads is yet to be seen, but Albano is prepared to hit the airwaves. Filings with the FCC show Albano has committed more than $18,000 to ad time on WGGB, WSHM and related sub channels. Similar buys for the pricier WWLP and cheaper but more diffuse cable are all but certain to follow.

Michael Albano in 2012 (via Facebook/Albano campaign)

Perhaps well-suited for the Internet’s campiness, these videos—which Albano calls ads, but usually lack paid media behind them—have mostly prompted guffaws. It is not clear what impact they have outside of pockets of Springfield where residents remember (a perception of) safer street and better times under Albano’s rule, objectively considered what prompted the city’s modern nadir.

Cocchi has already spent about $50,000 on all advertising going back to 2014. While Ashe has not bought ad time, the councilor has the funds to do so in Springfield’s relatively cheap media market.

In his ads, Albano will likely capitalize on the few union endorsements he has received. Labor, including major public safety unions, has largely divided between Ashe and Cocchi.

Albano narrowly beat out Ashe for Hampden County correctional workers’ endorsement amid low turnout, according to a source familiar with the vote (Cocchi did not seek the endorsement, though he was unlikely to win it).

It is not clear if that nod will persuade voters who have eschewed politicians seeking countywide offices. Both Ashe and Cocchi have worked for Massachusetts sheriffs’ departments. Albano has not.

That leaves Albano with little room to maneuver. Appeals to outside the city could be problematic as suburbanites may recall their tax dollars were needed to bail out the city he left in financial ruin. This was even as the feds arrested and later convicted countless Albano administration staffers.

Albano has tended to blame the city’s financial crisis on state budget cuts and the federal investigations on a FBI conspiracy to destroy him.

Whether enough television time exists for Albano to convince Hampden County voters Albano’s story is the truth and that he will make the best sheriff, only time will tell.