EDITORIAL: See Every Man & Women, Whose Deaths Diminish Us… 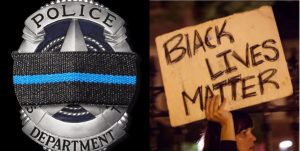 In only a few days’ time, across the country, the streets of the United States run with blood. In Baton Rouge and near the Twin Cities, two young black men were killed by law enforcement. In Dallas, five police officers, who only moments before were protecting Black Lives Matter protesters, were murdered. None of this is acceptable.

There is a taint within our justice system—and our collective social consciousness—that results in these unwarranted police shootings. As the Governor of Minnesota remarked, it is hard to imagine Philandro Castile’s death were he white. But justifiable outrage cannot and should not paint police with a broad brush, let alone deprive them of their lives. That only mars any hope for change.

This blog’s commitment to social justice leads us to find common cause with the mothers of principally though not exclusively young, male, African-Americans slain in confrontations with police, guilty of nothing but being in the wrong place at the wrong time.

However, this blog is also mindful of police officers’ situation as well. The death of Springfield Police Officer Kevin Ambrose, murdered—coldly—while responding to a domestic violence dispute, is etched into in our memory. We do not know Officer Ambrose’s entire service record, but in those final moments on this earth, in service to our city, he was the paradigm of a good cop.

Alton Sterling, shot during while being subdued, Philandro Castile, shot in his car during a traffic stop. (via Portland Mercury)

This is not an either/or proposition. Black Lives Matter is not to the exclusion of all others. It is a statement about the inequities in our system. Five decades after the Civil Right Act, perhaps stoked by the spike in urban crime during the 1970’s and 80’s, we have allowed discriminatory mandatory minimums, inner city disinvestment and uncalled police-related deaths to fester.

This flows into law enforcement. Those cops that discharge their weapon out of fear, irrational or not, are different from truly bigoted or inherently violent ones. Still the former, however humanly frightened, must face real consequences. This is the only way communities and police departments serving them can (re)build trust.

Yet, that consequence is not death. Los Angeles Mayor Eric Garcetti called the events in Dallas assassinations. Given the Lee Harvey Oswald-esque attack, it fits.

Tonight's assassinations undermine our democracy and were an attack on us all. We cannot let hate spread like a disease in our country.

Our country depends on both those who protect our democracy and those who embody it. LA is with you Dallas.

A key part of moving forward is recognizing the humanity in us all.

Each person the police encounters must be treated as individuals with no prejudgments uncommon to all people unless information specific to only that individual suggests otherwise. Additionally, the fraternity police value must include, as it often does, intervention when their comrades’ behavior may presage a tragedy—domestic or on the job. They should call out bad, needlessly forceful or bigoted behavior. Isolation may starve it for lack of reinforcement. Clear lines of communication between the lowliest officer and the top command are essential to report concerns.

As Jon Stewart once said, we can hold law enforcement in high regard and still hold them to a high standard.

But the community must not generalize either. This is perhaps the greatest tragedy of Dallas. It has been hailed as a model of outreach and retraining.

Residents must see police as individuals, judging each accordingly. For every cop caught on film beating someone with a flashlight, there are the Kevin Ambroses and countless more doing their jobs diligently, their praises unsung. Even as the community marches to declare black lives matter, it must continue to disown oversimplifications, especially vulgar ones, condemn “when you play with fire” axioms when cops die and mourn those deaths, too.

Relatedly, this blog does not object to filming the police. It has brought great accountability to our system. Objections won’t change individuals’ willingness to whip out their cell phones anyway. It shouldn’t. But, when citizens film, they must not harass, hinder or otherwise molest police. Record if you like, but do not create a fracas where none exists.

Micah Johnson, the 25 year-old man seemingly and solely responsible for this massacre, will, perhaps controversially, not face justice on this earth. But his cowardly attack on our right to protest, on our right to demand accountability from police and on innocent officers will scar this nation. It cannot shake its values.

Those who killed Castile in Minnesota and Alton Sterling in Louisiana must face justice, too. Demanding such is not an attack on police. This blog wants law enforcement to match the ideals of our nation. That requires, like any organ of government or part of our society, accountability.

The families of the officers slain in Dallas and civilians shot in Louisiana and Minnesota are in our thoughts now. Dallas Police Chief David Brown said his officers often do not feel from the community, even as transparency has improved and crime fallen. That is unfortunate, especially since police and protesters got along so well Thursday night, even posing for photographs. The same night, protests nationwide went forward amiably.

Perhaps that image should be our guide. Moving toward one another, mind and heart open, to find peace in the streets of these United States.