The End of an Era: National Recognition Part of Sheriff Ashe’s Legacy…

The High Sheriff in America

This post is the first in a series about the end of Michael Ashe’s 42-year tenure as Hampden Sheriff. 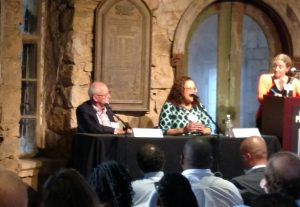 PHILADELPHIA—Imposing, 30-foot walls separate the Gothic Eastern State Penitentiary from the charming, adjacent residential neighborhood. When built nearly two hundred years ago, the facility was in the Pennsylvania countryside, far away from the metropolis that would eventually expand around it. Looking past its outward deterioration, it is remarkable to think this fortress was once the cutting edge of corrections reform.

Early on, influenced by Quakerism and modern thinking, Eastern State emphasized solitary confinement, but also dignity and self-improvement, turning away from the 18th century’s harsh, often public punishments. The Vera Institute of Justice chose to launch its Reimagining Prison initiative from the ex-penitentiary last month. One of the people Vera featured was Hampden County Sheriff Michael Ashe.

“Never thought I would be elected,” he told the audience sitting in the central node of Eastern State, which first opened in 1821. But in 1975 he arrived at Hampden County’s jails and rejected its “warehousing kind of concept,” something many still see too much of today.

Though Ashe and the Vera Institute go back years, his invitation to appear 200 miles from home underscored the national reputation he has built even in the twilight of his 42-year career as sheriff.

“My policy is to work with various organizations on projects that I believe will benefit corrections in Hampden County or any other jurisdiction that can benefit from the Hampden County experience,” he said in a statement, noting Vera’s work and research particularly on segregation and safety.

The Reimaging Prison initiative is an 18-month long endeavor Vera, a social justice advocacy group with activities nationwide, has undertaken to consider the goals, values and purposes of incarceration especially amid declining support for mass incarceration.

Ashe’s participation at Vera’s June 20 event in Philadelphia was part of a recent burst of recognition he has received in his final months in office. However, Ashe has long been on the radar of corrections watchers.

A 1983 book on limited corrections resources touted the programming at jails under Ashe’s control as well as professionalism. Ashe’s community corrections program is the subject of a chapter in David C. Anderson’s 1998 book, Sensible Justice. Both were on a list the Hampden Sheriff’s Department referred to WMassP&I.

In a report issued this year, the Justice Department cited the Hampden County Correctional Center—the jail in Ludlow—for changing its segregation from a “jail within a jail” to a place that, as intended, “emphasized providing avenues for, and reinforcement of, positive behavior.”

The White House also honored him earlier this year as a “Champion of Change.”

In a statement, Fred Patrick, the director of Vera’s Reimagining Prisons effort said, “Within the corrections field, the Hampden County Jail has been touted as a model of a safe and humane jail with a focus on rehabilitation.” Noting the initiatives effort encompassing both jails and prisons, Patrick added, “Many jail administrators from around the country have consulted with Sheriff Ashe and his team over the years in an attempt to duplicate that success.”

In some ways, Vera’s kickoff provided an interesting backdrop to the race to succeed Ashe.

Ashe mentioned a “high” sheriff’s right to hire virtually all staff—one of the great political attractions to the office. Though he admitted to not always succeeding, Ashe said he tried hire the best. He alluded to his office’s addiction programs like the Western Massachusetts Alcohol Corrections Center, a flashpoint in the race.

Each of the Democratic candidates represents something on the post-Michael Ashe spectrum.

Many see Assistant Superintendent Nicholas Cocchi as offering continuity with the approach Ashe has taken. Springfield City Councilor Thomas Ashe has proposed no break with that and had worked in jails himself, but comes from a place much closer to law enforcement philosophically. Governor’s Councilor Michael Albano has spent much of campaign critiquing Sheriff Ashe’s record.

Independent James Gill and Republican John Comerford’s place on the continuum may become clearer after the September 8 Democratic primary. 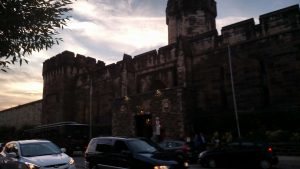 But back in the historic Fairmount Neighborhood where Eastern State Penitentiary stands, Ashe seemed somewhat ahead of his time speaking about incorporating more dignity and rehabilitation into corrections even forty years ago.

Ashe said for a time Hampden County was “a voice in the wilderness” on these notions. Undeterred by the 1980’s and 1990’s tough-on-crime eras, Ashe found encouragement in the newfound will among policymakers to consider alternative correctional approaches.

Good to see so many people here committed to reforming the criminal justice system in this country. #ReimaginePrison pic.twitter.com/kpCevgGiCR

Nixon said people meeting actual prisoners has helped change the debate, “What has driven this tough on crime era that we are coming out of is the face of prisoners that does not match the real population of people in prison.”

Secretary Wetzel said upon visiting Dutch and German prisons, he found many countries eschew a “them,” view of prisoners. Partly as a legacy of the Holocaust, citizens have a different perspective on freedom and human dignity, even for criminals. The opiate crisis has offered a bittersweet opportunity to transplant that thinking to the US.

“For the first time in my career, I’m starting to hear language around the table from law enforcement” and others, referencing roundtables Pennsylvania Governor Thomas Wolf has held on the opiate crisis, “that we can’t arrest our way out of this, that these are our brothers or our sisters or family members and they need treatment and not prison.” Those attitudes, he suggested, need not be limited to the heroin epidemic.

As a social worker entering the sheriff’s office 40 years ago, Ashe may have been ahead of the curve, but reversing decades of corrections policy nationwide geared toward stiff sentences and packed prisons will take time. Moreover, the pendulum can swing in both directions, toward and away from reform.

In the mid-19th century, Eastern State evolved into a more traditional, overcrowded prison from a forward-thinking—if not entirely practical—place where penitent inmates sought improvement. The prison closed in 1971 closure and is now a museum.

Undoubtedly, Ashe’s work in Hampden County is what has earned him national recognition. In Philadelphia, Ashe mentioned education programs and job placement initiatives, many of which are well-known in the Pioneer Valley.

On a page feting its Champions of Change, the White House website observed “Sheriff Ashe has established a model continuum of supported community re-entry for offenders, including some 300 community partnerships with public, non-profit and private organizations,” as well as helping offenders find some 10,000 jobs over the last 20 years.

However voters settle the question of succession, the positive national attention Ashe has brought to Hampden County also seems destined to be part of his legacy.

Sheriff Michael Ashe: "You and I know everyone has dignity." #ReimaginePrison

“You and I know everyone has dignity, they have value and what we’re all about is trying to help people realize their potential,” Ashe said in Philadelphia. “That’s the whole idea about corrections.”