An Open & Shut Clambake for the 39th and Final Time…

The High Sheriff in the Valley

This post is the second in a series about the end of Michael Ashe’s 42-year tenure as Hampden Sheriff. 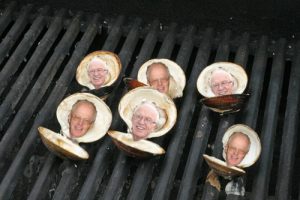 The final clambake, the end of an era. (created via Google image search)

SPRINGFIELD—This year’s sheriff’s clambake may not be the last in Hampden County ever, but it is Michael Ashe’s last at the helm of a sheriff’s department he has led for 42 year. By far one of the most significant political events in the commonwealth, and one of the few of its size in the 413, Ashe’s clambake is a tradition of every political cycle state and local.

But with his 2014 decision to retire, this clambake was also an opportunity for many to fete the career of social worker-turned sheriff before he hands off the reins in January. Statewide leaders from Governor Charlie Baker and Attorney General Maura Healey to candidates for office, alongside hundreds of politicos and sheriff employees and alumni crowded the Elks picnic grounds here, giving tribute to Ashe’s tenure.

“It’s bittersweet,” Mary Hurley, a former judge who is currently running for Governor’s Council. She observed he was a leader in corrections nationwide, but also ever obliging toward others, “Anyway he could help, anytime, anybody.”

Even as the race to succeed Ashe rages on—only his chosen successor Nicholas Cocchi was visible to WMassP&I—the appreciation and history were palpable. The clambake, Ashe’s 39th’s predates the birth of even some local officeholders.

However, with few competitive races in the Pioneer Valley this year, none statewide and titanic battle drawing national attention, the crowd seemed modest compared to some recent years. But heavyweights like Baker, Healey and Senate President Stanley Rosenberg were a reminder of both the respect Ashe commanded and the attraction of this event. Past clambakes have hosted Senators Ed Markey and Elizabeth Warren and entire gubernatorial fields.

“Not many politicians in the state can pull a crowd of people this big,” Senator James Welch of West Springfield told WMassP&I.

The sheriff himself seemed happy and at ease and, during an interview with WMassP&I, not at all wistful.

“I just feel a sense of gratitude,” he said for the support and thanks from many across the region, especially when they elected him, then a social work with no correction background, in 1974

The sheriff said the clambake started in 1977 after he declined to hold a steak fry his predecessor had held. That event was geared more toward lawyers, whereas Ashe tried to open it up to anybody—admission in 2016 was $50, but includes mountains of food and some drinks.

However, Ashe seemed more interested in focusing on the job itself rather than the political bourgeois. While he did indulge in a little pride at his office’s recidivism rate, he zeroed in on the programs that help inmates get back on their feet, go through treatment programs (rather than languish in jail) or go to college. That’s “the finest thing we do now.”

Others were more willing to heap praise upon the sheriff. Welch observed that many pols came to the clambake and, by implication, sought Ashe’s counsel because he kept his promises and was committed to public service.

“People respect him because he’s a man of his word,” Welch said.

Hurley, who had been to her share of clambakes as councilor and later mayor in Springfield, highlighted his constant willingness to use the resources at his disposable to help communities and even other organs of government. She recalled that as 1st justice of Chicopee District Court, Ashe coordinated with the Chicopee Police chief to save the court money on a lockup facility.

But as a judge she also saw the impact of the programs his department had instituted on Howard Street and in the jail itself.

“He made people worthwhile again,” she said.