Have You Seen These Hampden County Voters?… 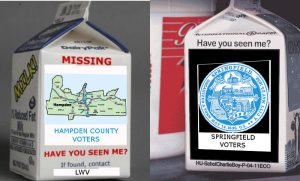 SPRINGFIELD—For whatever reason, Hampden County has a number of missing people—at the polls. Data from 2012 indicates that the county, which contains the commonwealth’s third largest city, falls well below the state’s turnout level. The problem is particularly pronounced here—though not unique countywide—but efforts are underway to find and draw in more voters.

The Springfield Public Library, joining forces with the city Election Commission and the League of Women Voters/Springfield held the third-annual candidate meet and greet in the Central Library’s community room this past Wednesday. Candidates in both the primary and general elections for all races affecting Springfield were on hand to meet voters in the hopes of boosting interests in elections, voting and civic engagement.

“We think it is really important voters be informed,” Linda Matys O’Connell, an organizer with the LWV said. “Particularly because this is the social justice landscape in Hampden County,” she added referencing the sheriff’s race, a point voters often overlook.

The Democratic primary for the sheriff, governor’s council and 11th Hampden races is Thursday September 8.

The crowd eventually filled the community room which housed all of the candidate this year compared to last year’s municipal election and the state election the year before that. In its inaugural year, the event drew more candidates than voters partly because of the massive primary and general election fields for four statewide offices, a state senate district and two house seats.

Gladys Oyola, the Election Commissioner here, observed increased interest over the years. “It’s in a good place,” she said of the event’s growth over time.

Yet, the data about voting habits in Hampden County and Springfield are stark. While voter registration statistics in Hampden County are roughly on par with state levels, turnout tells a different story. Gaged against total eligible voters—as opposed to registered voters, by which many communities measure turnout—Hampden County’s numbers look miserable.

Among Western Massachusetts counties, Hampden is dead last in turnout except within the 18-24 female cohort. Four years ago, only in Franklin county did young women vote at a higher rate than those in Hampden County.

The problem is particularly bad in some cities. While Springfield has averaged around 50,000 voters in presidential elections, 2012 represented a recent peak, partly due to the Elizabeth Warren campaigns’s aggressive organizing that year.

Municipal elections are particularly bad in Springfield. Last year, less than 17 percent of registered voters voted, a record low for a mayoral election. A facepalm-worthy 7% turned out for the mayoral preliminary last September.

Limited available information and minimal media attention fueled the voter vanishing act. That directly relates to something O’Connell and her LWV colleagues have found. Many voters avoid the polls because they lack enough information about the candidates.

To that end, the LWV’s Springfield branch is holding a “candidating” event later this month and is preparing personalized voter guides through the national league’s vote411.org website.

The candidating event, which will focus on the sheriff and Governor’s Council race, will include education about the offices themselves and opportunities for voters to meet candidates face-to-face. Scheduled to begin at 5:15PM on August 29, it will be held at Trinity Methodist Church on Sumner Avenue in the Springfield.

Other efforts are underway as well. Early voting and no-excuse absentee voting—historically, state law allowed absentee ballots only if the voter affirmed he or she would be outside out of town on Election Day—will not be available for the primary. That will change during the general election.

Massachusetts’s early voting law requires communities to establish some opportunities for voters to cast their November ballots ahead of Election Day. Oyola, the city election commissioner, said implementation plans are coming together.

In addition to extending her office’s hours before November 8, Oyola said she hopes to “hit every ward for at least one day” with an early voting location. Springfield’s Elder Affairs Department, libraries and community groups are expected to assist with outreach. More details will be released after September 8.

Oyola said this first early voting outing will attract only a few non-voters this year. Many, she expects, will be regular voters taking advantage of the convenience. However, with more outreach to and awareness among city residents it could attract more voters in all elections.

Improving turnout, even in Hampden County cities is possible. While smaller, Holyoke shares many demographic and socioeconomic traits with Springfield. Yet, more and more of its voters have hit the polls in recent municipal and state elections, outperforming the larger city’s turnout in both.

Hampden County lagging state turnout is a problem, but not a crisis. But with barely more than 10 percent of Springfield’s population steering its elections, efforts to draw more voters are paramount. The credibility of Springfield’s own democracy is at stake.