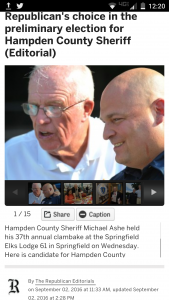 Mobile Screenshot of The Republican’s endorsement of Nick Cocchi, published Friday, but not currently available. (via Google)

The Republican newspaper’s endorsement in the Hampden Sheriff’s race got out ahead of schedule, revealing the paper choice in the fiercely contested Democratic primary. Not altogether surprisingly, the editorial board of the region’s largest newsroom has decided to get behind Assistant Superintendent Nicholas Cocchi.

The newspaper, which publishes online via its local digital sister outlet Masslive, posted the since-removed endorsement late Friday afternoon. The editorial largely focused on Cocchi and the legacy of retiring sheriff Michael Ashe in making the case for the jail official.

“His 23 years of experience at all levels of the correctional field include direct work with inmates and the designing programs,” the editorial said of Cocchi.

Cocchi is facing Springfield city councilor Thomas Ashe and governor’s councilor and ex-Springfield mayor in the September 8 primary. The winner will run against independent James Gill and Republican John Comerford.

Republican Executive editor Wayne Phaneuf, in an email to WMassP&I, said the editorial had been accidentally posted while it was being edited.

” It was up for three minutes and taken down,” Phaneuf wrote. “It was scheduled for 6 am Sunday,” the  time it was posted. 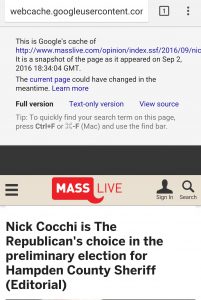 Mobile screen shot of Google cache note for the endorsement. (via Google)

When this article was originally posted, the editorial had been pulled from Masslive, but was still available via Google’s search cache created from the original posting Friday. The link to the page cached by Google had gone to an error page on Masslive.com

On Saturday, sources familiar with local media had teased a big endorsement for Cocchi due the next day. Thus, the editorial was probably due to appear online concurrent with it publication in The Sunday Republican.

“Cocchi’s candidacy carries pledges of expansion and modernization of practices already in place,” it continued.

The editorial mentioned both the questions the campaign has raised about the sheriff’s tenure and the baggage all of the candidates possess. However, it did not dwell on either, choosing instead to praise sheriff’s Ashe’s legacy and arguing Cocchi was the one to preserve it.

The newspaper’s editoral slant has not been especially pro-Cocchi—it has published plenty of stories the Cocchi camp would probably prefer it hadn’t. The ed board has not telegraphed its position before this, but it has tended to favor pols with prominent supporters, such as  Sheriff Ashe, who is backing Cocchi. Indeed, the editoral noted the “impressive list of local, regional and national law enforcement officials” behind the assistant superintendent.

Yet, supporters of Councilor Ashe have grumbled some of the paper’s non-editorial behavior betrays a bias. Albano has made general accusations about the Pioneer Valley media, includingThe Republican, in particular.

Perhaps what is more notable is the paper’s decision to endorse at all. 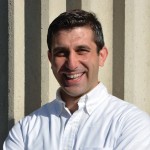 In 2014, Anthony Gulluni, also in a countywide race, got The Republican‘s primary endorsement, but he faced no opposition that November. (via Facebook/Gulluni campaign)

In 2014, The Republican abstained from primary endorsements in races that would go on to a competitive general election. For example, it declined to endorse in the Attorney General’s race, as the Democratic primary winner—it was ultimately Maura Healey—would face a Republican opponent in November. However, it did speak on the Hampden District Attorney’s race, backing eventual winner Anthony Gulluni, who faced no opponent beyond the primary.

The paper applied this policy to all of the races that year, which included several hard-fought primaries for the state legislature and the commonwealth’s executive officers. Had it done the same this year, it would have abstained from Hampden Sheriff, but still could endorse in the Governor’s Council and 11th Hampden House primary that will also be decided on the oddly-placed primary this Thursday.

Phaneuf, The Republican‘s executive editor, alluding to plans to opine on all primaries this year, explained the decision endorse even in a race assured to have a contested general election.

“In the Democratic primary for sheriff, with the probability that the winner would top the  November ticket, we endorsed in the preliminary,” Phaneuf wrote.