A Company Man for Sheriff: Cocchi As Heir & His Own Man… 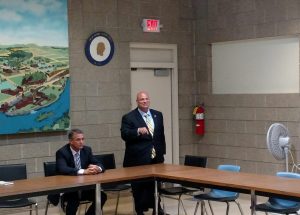 SPRINGFIELD—For Michael Ashe, 2016 has become the omega to his alpha in 1974, when he stunned the Hampden County political world by winning the Democratic nomination—the real contest—for sheriff. The sheriff’s latest and greatest campaign, however, is also Nicholas Cocchi’s bid to succeed the retiring Ashe.

That reality has been both a blessing and a burden for Cocchi. While he has enjoyed the spoils of Ashe’s reputation for compassionate corrections, Cocchi has also endured 42-years of pent up frustrations about Ashe’s administration.

“I want to take the positive of the jail,” such as a 33% recidivism rate, Cocchi said, “and the things that need corrective action.”

It has been a complex ballet for the first-time candidate who has styled himself as a public servant versus politician in the race seeking to succeed a consummate version of both. With practice he has performed this better since first announcing. 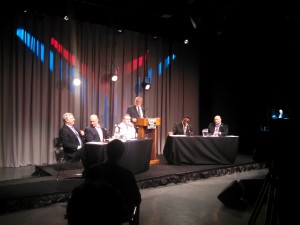 The Democratic Hampden Sheriff’s field plus Independent James Gill at the May debate before Griffin dropped out. Not pictured John Comerford. (WMassP&I)

In an interview at his campaign headquarters here in 16 Acres center, Cocchi was by turns, conciliatory and defensive, impassioned and deadpan about his campaign, his qualifications and his boss.

Dressed casually for a day of campaigning, he described his early work in the sheriff’s department. Cocchi got his start as a summer employee in between semesters in college and was allowed to stay on provided he finished school.

“‘If I hire you, you’re going to have two full jobs,’” Cocchi recalled Sheriff Ashe telling him. Though there were some incidents very early in his career for which he was reprimanded—drinking off the clock on department property, taking a sheriff’s vehicle to a strip club during a training—his trajectory has been up since.

Throughout the interview, Cocchi became especially animated discussing the job, peppering in his experience and accomplishments. Even among opponents, the length and breadth of his resume in the Hampden Sheriff’s Department is hard to dispute.

Whether it outranks his opponents’ background—Albano has shoehorned his political career into corrections, Ashe has pitched his experience in and out of corrections as “well-rounded”—is different 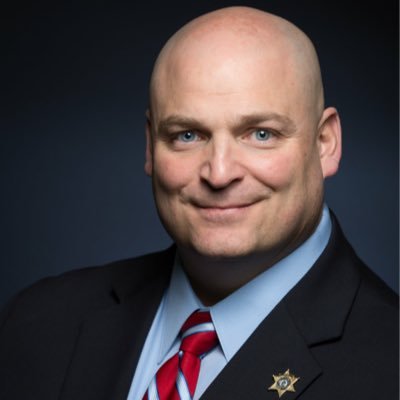 “You cannot offset 23 years of being in the correctional service,” Cocchi averred. “All experience in corrections is not equal”

Being sheriff himself may be the ultimate challenge, however. Cocchi recognizes poor morale at the jail, which he attributed partly to the impending transition and normal labor/management friction.

“I have no ill-will toward our union,” Cocchi said. “They didn’t do anything to Nick Cocchi. They do a great job.” If elected, he pledged to sit down with and work on quality of life issues for staff.

Some fear favoritism and political pressure will live on. A recent complaint to the Commission Against Discrimination alleging homophobia, seemed more about claims of political intimidation than discrimination—which if true would be better filed with the Ethics Commission.

Correction officers endorsed Albano, but about half didn’t vote. Cocchi attributed this to his decision to stand aside—to calm the waters, he insisted, not for fear of embarrassment—from consideration. “People that worked at the jail would understand, that on the weekends, in the staff dining in the community it was getting ugly,” among factions of employees supporting different candidates.

Cocchi acknowledged some employees’ skepticism about him and seemed concerned about how to win them over and prove he, too, could be an agent of change.

The Western Mass Regional Women’s Correctional Center. Cocchi said the videotaping policy had carried over from the Ludlow jail, which now houses only men. (via hcsdma.org)

Despite defending Sheriff Ashe, Cocchi has promised change. Unprompted, he brought up the women’s jail strip search recording, which his opponents have seized upon.

“I went on record and said the strip search policy is a bad policy,” Cocchi claimed. While he said he and the sheriff were fair game, staff at the jail are not. He took “umbrage” at claims guards behaved unprofessionally (a federal court ruled the mere presence of male guards was unconstitutional, never finding guards saw anything).

“They do an extremely professional job in very difficult situations for themselves and the offender,” he said, adding inmate safety was also a factor. “Before we can do any bit of programming, we have to make sure we provide a safe and humane environment.”

On retired employees rehired as consultants, Cocchi explicitly pledged, “I am terminating all consultants.” He added that he had eliminated superintendent positions he deemed unnecessary.

These were the areas where Cocchi had to execute the most complicated steps of sharing Ashe’s legacy and distancing himself from it. Cocchi discussed and disavowed the consultants, but noted he was not responsible for hiring. He said he did not initiate the strip search policy, but as an assistant superintendent he took some responsibility and declined to blame the sheriff.

“Mike Ashe wasn’t a politician when he took the job,” Cocchi observed, speaking about his own political education. Convivial and engaging, Cocchi has little trouble with political hobnobbing,  and he has built a  an impressive coalition spanning the region’s political spectrum. However, there have been bumps that may have become fodder for opponents.

Mayor Domenic Sarno, who has endorsed Ashe, and Police Commissioner John Barbieri, who has stated no preference in the race, condemned the ad. Crime data provided by the Springfield police department and submitted to the FBI would appear to validate Barbieri’s contention that crime has in fact fallen from 2011 to the present. 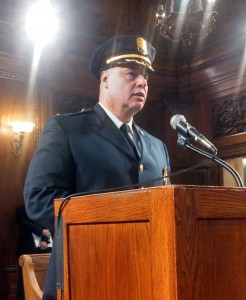 Springfield Police Commissioner John Barbieri, largely viewed as an apolitical actor in the city, condemned the ad along with Mayor Sarno. (WMassP&I)

But more than that, the impugning of Springfield seemingly added to the provincialism and local division that has bedeviled the region for eons.

Cocchi pushed back, “I just feel that that ad was a very fair ad.” He later claimed his campaign has not put out anything that has not been validated or was untrue. When asked why the ad had been pulled from social media, Cocchi deferred to his media team. Yet, he denied any attempt to paint the city poorly and insisted he wanted to see Springfield healthy and thriving again.

More delicate politicking will be essential with the new Western Massachusetts Correctional Alcohol Center (WMCAC) on Mill Street in Springfield set to open soon. Though unlikely to succeed some neighbors have sued to keep the facility from opening and locating to the North End foundered amid an opaque process and community opposition. Cocchi committed to earning Mill Street residents’ trust as he said the department had in Holyoke where WMCAC is temporarily located.

“Their opinion of our facility will mean a lot to me,” Cocchi said.

As Cocchi heads into the most critical part of this campaign, he has not been deterred by the recent viciousness, regardless of who is to blame.

Cocchi has gleaned one lesson from this experience. While Sheriff Ashe’s record in corrections is exemplary, he has served with relatively little scrutiny. Better public relations and broader outreach might have softened the blows that later came from the media and the campaign.

“What I could do maybe as the next sheriff is be better at communicating,” he said. “Don’t let people make up the story. Let’s all get together and talk about it.”

That may be essential for a company man like Cocchi, following a giant like Mike Ashe, to heal the rifts and make his own mark on Hampden County.