Briefings: Warren, Moulton to Rally for the Local Down Ballot… 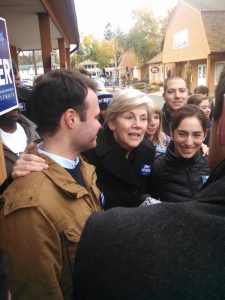 United States Senator Elizabeth Warren is one of the most in-demand surrogates for Democrats nationwide. Yet, despite the lack of a statewide race the progressive icon has not neglected her home state. Warren campaigned for Democrats on the Cape this month and is now heading west to lend a hand and her voice to down ballot candidates in the 413.

According to Facebook event invitations, Warren and Salem US Representative Seth Moulton will appear in East Longmeadow to rally supporters of State Senator Eric Lesser ahead of the election less than three weeks away. The duo’s visit is the latest counterpunch to the prominent support Republican James “Chip” Harrington has received from Gov. Charlie Baker and Lt. Gov. Karyn Polito.

Harrington and Lesser are competing for the 1st Hampden & Hampshire Senate district, which consists of Belchertown, East Longmeadow, Granby, Hampden, Longmeadow, Ludlow, Wilbraham and about a third of Chicopee and Springfield each. Lesser was first elected in 2014.

Structurally, presidential level turnout heavily favors Lesser, but both Moulton and Warren offer Lesser something to pad the margin on the edges.

Warren can and will draw a large crowd of people, many of whom will man the clipboards and knock on doors for Lesser. But even beyond inspiring political volunteerism, Warren may spark enthusiasm among voters who might skip casting a ballot on the assumption that the presidential race in Massachusetts is a forgone conclusion. 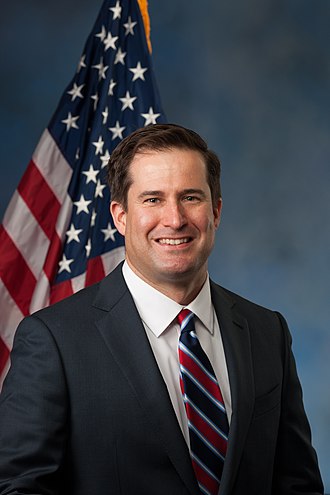 US Rep. Seth Moulton (via wikipedia)

Moulton offers something else. A decorated former combat marine with a penchant for modesty, he shocked the Bay State political world by defeating an incumbent congressman for re-nomination in 2014. While Lesser does not want for veteran support—for example his father did a stint as a National Guard doctor in Iraq—Mouton could be a potent advocate for the senator on this subject.

Along with US Reps Katherine Clark and Joseph Kennedy, III, Mouton is one of the commonwealth’s rising stars in Congress.

Warren and Moulton are scheduled to appear at the American Legion in East Longmeadow at 3pm.

Baker and Polito have campaigned for other state GOP candidate and they have mostly appeared at fundraisers for Harrington. The governor is expected to return west to campaign again before month’s end for a more social event. Stuck in the campaign purgatory facing many Republicans—Baker rejected Trump and his preferred candidate, near-disgraced New Jersey governor Chris Christie, tanked—he is unlikely to venture beyond the commonwealth much before November.

While Warren is perhaps better known as a top national surrogate and campaigner for—she will appear with the former Secretary of State Hillary Clinton in New Hampshire Monday—she often lends support and time to local and state Democrats.

In 2014 she campaigned for Lesser in the general election and has enthusiastically backed supporters or former staffers of hers in municipal races such as Lawrence mayor Dan Rivera and Boston at-large city councilor Michelle Wu.

Her appearance on the Cape to bolster Dems seeking open or Republican-held seats was a high profile foray into the otherwise sleepy state elections aside from some declarations on ballot questions.