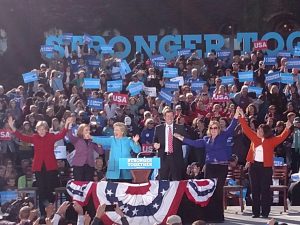 GOFFSTOWN, N.H.—As Election Day creeps ever closer, United State Senator Elizabeth Warren and former Secretary of State Hillary Clinton’s shared a stage Monday afternoon to energize volunteers. But their focus seemed not just Clinton or even the GOP presidential nominee Donald Trump. With polls showing Clinton’s strength in New Hampshire holding, attention has been shifting toward to the down ballot New Hampshire races.

In what may be Clinton’s last stop to New Hampshire before November 8, she and Warren made a forceful case for the current governor running for Senate Maggie Hassan, a governor’s councilor running for governor Colin Van Ostern, and Congressional candidates Ann Kuster and Carol Shea-Porter, the former of which is an incumbent.

Noting she has been campaigning across the country for Democratic Senate candidates, Warren said she was pleased to be in New Hampshire, “It’s like hanging out with your next door neighbor!” 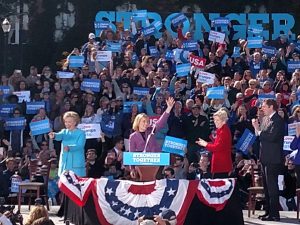 Hassan also Rises? Clinton and Warren were the draw, but Gov. Hassan, a US Senate candidate, seemed a star, too. (WMassP&I)

Indeed, on this brisk sunny New England afternoon, the emphasis seemed as much about making Hassan a new neighbor of Warren’s in the Senate as it was to send Clinton to the White House.

“What I love about Maggie is she is independent, she knows how to find common ground and how to stand her ground,” Clinton said of Hassan. “And unlike her opponent, she has never been afraid to stand up to Donald Trump.”

But that hardly meant the real estate tycoon and provocateur was off-limits.

It led Warren to fete the “strong women” on stage with her, remembering “friends of women” with her, too, namely Van Ostern.

Warren left plenty for Kelly Ayotte, the incumbent Republican US Senator against whom Hassan is running. Listing many, if not all of the absurdities and insults that Trump has belched but did not phase Ayotte, Warren concluded with, “Donald Trump even attacked Kelly Ayotte and called her weak and Kelly stuck by him!”

“Donald Trump sure has made Kelly Ayotte dance,” Warren said to uproarious cheers before launching into her standard stump of values on college education funding, infrastructure and science, i.e. climate change.

While Clinton exuded confidence about New Hampshire and spent much of her time bolstering the down ballot, she paid one of many compliments to the Massachusetts Senator.

“She gets under his skin like nobody else,” Clinton later remarked of Warren’s penchant for needling Trump. Clinton added, “The best TV is on C-SPAN when Elizbabeth is going after bank executives or regulators.”

There was plenty of Trump battering throughout all the speakers’ remarks, including Clinton’s. Perhaps as part of the down ballot pitch, however, there was an effort to make a hopeful, more positive case for Democrats.

Even as she highlighted Trump’s “horrifying” refusal to promise to accept the results of the election, Clinton highlighted the work people were doing to register voters and make sure elections were conducted properly. 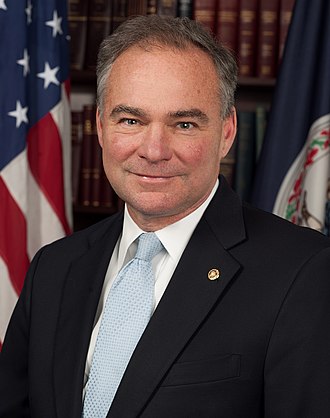 “Millions of people are standing up for democracy” in the US she said.

Clinton briefly riffed on her running mate, Virginia Senator Tim Kaine, relating a story of a woman who told him she faced employment discrimination after giving birth, losing her job. Clinton said Kaine told her this story and said thing like that were what motivated him.

“I think your president should care about that,” Clinton said. referencing stories like the fired mother.

Though this long, bloody and at times vile election has taken a toll, enthusiasm was at no low ebb here. A crowd of thousands greeted Clinton, Warren and the ticket with one source saying 700 had been turned away. A mob surged toward the stage as Clinton and Warren stepped down to greet supporters, take pictures, and sign knickknacks.

But there were exhortations from Warren and the candidates on stage to supporters keep working and plugging over the next 15 days.

After detailing Clinton’s battles—and scars—Warren called on supporters to do their part in the final days, “It’s now time for us to fight for Hillary!”