SPRINGFIELD—The battle over charter schools dominated Monday City Council meeting, injecting the body into the fraught battle over the ballot question that would raise the charter cap in Massachusetts. But that issue did not monopolize councilors’ attention, as the body also spent a considerable amount of time contemplating frequently glossed-over reports common to most meetings.

Charter school expansion, via raising the cap on the number of schools permitted under law, had been a priority of Governor Charlie Baker. Gaining little traction in the legislature, advocates turned to the ballot and placed what is now Question 2 before voters in November. But opponents have put up stiff resistance, securing the backing of several elected bodies, including now the Springfield City Council.

Among the reports of committee was at-large Councilor Kateri Walsh’s was a review of utility reports. Several had been sent to committee at the last meeting rather than quickly approved as per usual. The reports, necessary to dig up streets and otherwise access city rights-of-way, have become a means for councilors to criticize utilities that don’t leave streets and sidewalks as they found them.

Christopher Cignoli, the Director of the Department of Public Works, explained Council approval is part of a process. Requests to dig up a street, for example, begins with vetting in his department followed by Board of Public Works review. Aside from actually pulling permit, the Council is the last step.

In response to councilors’ concerns that utilities do not always do the restoration work promised or required, Cignoli asserted, “We have the teeth and requirements to make sure the work gets done.”

Additionally, City Council President Michael Fenton said he had spoken to the City Engineer, a subordinate of Cignoli’s who oversees curb cuts and street digs, and received assurances the DPW would better explains pending work in reports before the Council.

Consequently, the Council accepted—i.e. approved—utility reports for work Comcast and Eversource had submitted as well as one for the PVTA to string wires under Frank B. Murray street for a mobile device charging hub at Union Station.

Reports submitted by Mobilitie, a firm that develop mobile phone infrastructure, were not so lucky. Fenton, who spoke more than the president usual does because he represents wireless companies in his legal practice, seemed reassured when the company’s representative said they had contracts with the major carries.

However, the poles’ size did them in for now. Cignoli confirmed Mobilitie’s poles, at 55 feet tall, were about 20 feet larger than the standard utility pole. The Council referred the reports to committee. 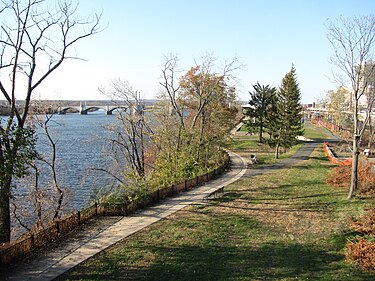 Due for a renovation. (via wikipedia)

The Council sped through the other agenda items. A revenue and expenditure report was accepted without debate. The Council accepted money from MGM for Riverfront Park due under the host community agreement. Parks chief Patrick Sullivan said design work would begin soon.

Grant money for DPW and new software in the administration and finance department were approved as were donations to the animal control, library and police departments. The Council authorized payment of a Treasurer’s bill from last year and granted an easement at the Balliet school for utilities.

Ordinances mostly remained in committee or only tiptoed forward. A long-running effort to update the city’s animal control ordinance advanced needed to repass first step as substantial changes made Monday rendered the prior first step invalid. The ordinance should pass at the next meeting.

The food truck bill, historic building demolition rules and Responsible Employer Ordinance changes were kept in committee. The Council did pass a measure on signage warning against eating fish drawn from local bodies of water on an 11-0 vote. Councilor Allen stepped out briefly and missed the vote.

But the charter school debate was perhaps the most intense, if also lopsided in the end.

Former Councilor Amaad Rivera, a supporter of Question 2, urged the Council to set aside the issue until it received more information. “Allow experts in the field to have an opinion,” he said before the meeting.

Springfield Education Association President Timothy Collins said charter schools were already flouting the law by not having student bodies representative of the districts they serve.

“They also don’t have the same percentage of kids who are in foster care, who are refugees who are homeless,” he said. “If this funding issue is not resolved, we are going to end up with two separate but unequal school systems.”

During the meeting Catherine Mastronardi, the president of the Springfield Federation of Paraprofessionals and School Superintendent Daniel Warwick echoed these concerns. They alleged charters educated disproportionately less special needs students, leaving the district with more expensive students to educate. Per student funds are the same regardless of the child’s needs.

“Until we can make a sytem that is fair for every single child in the whole state of Massachsuetts,” Mastronardi said, not criticizing charters’ educational programs directly, “I don’t think expanding the number of charter schools we have is the answer,”

“We still have the same fixed costs, the same cost for pensions, the same costs for health insurance,” Patrick Roach, the schools’ chief financial officer said.

Ward 6 Councilor Ken Shea, a former School Committee member, took a different tack. “This is about choice,” he said, arguing other families made theirs by moving out of cities. “It is the family stuck in the cities that need a better opportunity.”

Shea’s argument failed to convince. Joined only by Ward 4 Councilor E. Henry Twiggs, the, the resolution against raising the charter school cap—that is in support of No on Question 2—passed 10-2.

Whether the Springfield City Council’s vote will affect the charter school debate is unknown, but Monday was another win for Question 2 opponents. Given how complex the issue is, perhaps the bigger problem for either side was the debate went uncovered beyond public access and one humble little blog.