Analysis: Amid Election Fallout, a Generation Gets Push Forward… 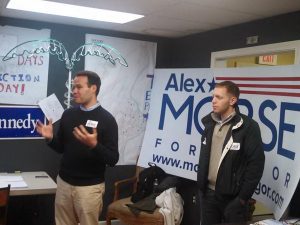 The wreckage of this month’s national election has had a number of effects across the country. Given the continued down ballot troubles of Democrats, one immediate consequence has been pushing forward a younger generation of figures in the party. In the Pioneer Valley, this has most clearly manifested itself in Longmeadow Senator Eric Lesser and Holyoke Mayor Alex Morse.

For reasons both good and bad, voluntary and not, among Millennial pols, their profiles took a sudden jump. Lesser proposed a resolution calling for the abolition of the electoral college and a couple of homophobic incidents in Holyoke targeted Morse.

Following real estate tycoon and provocateur Donald Trump’s shock victory over former Secretary of State Hillary Clinton, discontent has risen over Clinton’s large lead in the popular vote. Meanwhile, Trump’s delight in demeaning various segments of society has seemingly touched off a broader wave of harassment and abuse beyond even those he targeted during the campaign.

The region does not want for young politicians. Four of 13 Springfield city councilors are Millennials and relative youngsters hold several elected positions across the region. But Lesser and Morse are among the most prominent young Democrats in the area and both were vocal Clinton supporters.

Lesser’s call to end the electoral college, which grants each state presidential electors equal in number to its representatives and senators, came as election returns show Clinton beating Trump by more than 2 million votes nationwide. As each state is entitled to at least one rep and two senators, voters in tiny states have disproportionately more power. Those in competitive states arguably possess even more.

The situation with Morse, however, is somewhat different. The mayor, who is gay, received a card from an anonymous sender who decried his “selfish” lifestyle and warned he was “going down.” Later a defaced Morse for Mayor sign with bad spelling appeared at a public park panning him in an off-color manner in a clear reference to his sexuality. Morse has brushed off the personal nature of the incidents and instead expressed concern LGBT youth may feel ostracized in such an environment.

Lesser had been pilloried as an ambitious jetsetter this year, but, aided by his record of achievement, topped challenger James “Chip” Harrington 56 to 44%. But as a prominent veteran of Obamaworld in Massachusetts, Trump’s election has likely made space and demand for Lesser to speak up. Nevertheless, Lesser wisely targeted Bay State, not national audiences with this announcement.

Likely more influence for Lesser under the golden dome. (WMassP&I)

Already well-respected within the Senate and Bay State political circles, the added attention can only further Lesser’s influence as he pursues his agenda, most prominently a technical study of establishing East-West rail. Furthermore a larger profile can more easily counter a governor who has stood in Lesser’s way before.

Meanwhile, blatant homophobia targeting Morse may cross a political taboo in the Paper City. A great deal—though not all—of the opposition to Morse has come from councilors and figures who are socially as well as politically conservative. Yet few have openly launched such attacks and even LGBT dog whistles are rare. Early on, these were allusions to his having no children, though also a nod to his youth, a much more common basis of attack.

Even after these incidents, a cursory look at social media shows Morse opponents did little more than growl that he did not likewise condemn crude, but not bigoted critiques the late James Bickford lobbed at since-resigned city councilor Jennifer Chateauneuf. Harassment of Trump supporters would be a more meaningful if imperfect comparator.

Some of this is political correctness, but Morse’s appeal has always transcended his sexuality. To older, potentially socially conservative Holyokers, Morse seems more a grandson than a stereotype. Meanwhile Latinos, far less hostile to LGBT issues than conservatives believe, are part of his base.

Over five years, homophobia has been too flammable for most Morse opponents in Holyoke to utilize directly. (WMassP&I)

Holyoke social conservatives know the risks and know some Morse critics back LGBT equality. The missives aimed at Morse could provoke sympathy—personal, political and national—galvanizing his expected reelection bid while splitting opponents when they might otherwise be shopping for a challenger.

Yet this time in the spotlight for both Lesser and Morse has brought criticism, too. Several tweets hurled at Lesser dismiss his electoral college resolution as sore loserdom. One conspiracy-minded outlet went as far as to imply Morse sent the card himself because his and the sender’s handwriting match—they don’t.

Does this boost ultimately change anything? Short-term that will be hard to measure. Lesser seemed well-positioned for the upcoming legislative session and Morse was likely to return to the playbook that three times won him Holyoke’s mayoralty.

This may matter most down the road as political opportunities develop for both. Interest in Millennial leaders will only grow as younger Americans assert their place in politics and society. Lesser, born in 1985, and Morse four years later, are at the older to mid-range of the Millennial generation born from 1980 to 2000 and enjoy the advantage of already holding office.

Thus more attention, better name recognition and clearer branding—fundraising has historically not been a problem for either—could be longer-term benefits for both.

This election has put off a potential conflict between Lesser and Morse for now. Clinton’s defeat closes off the widely-anticipated conclusion to US Representative Richard Neal’s public service—serving as ambassador for Ireland. A vacancy in his congressional seat would spark a battle royal in which Lesser and Morse are among the most widely speculated contenders.