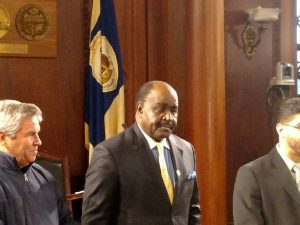 SPRINGFIELD—To the surprise of few, State Representative Bud Williams announced Monday he would not relinquish his City Council seat after being sworn into the 190th General Court last Wednesday. Resigning mid-way through his eleventh term would have deeded it to 2015 rival, Jesse Lederman.

Claiming the decision made was in Springfield’s best interests, Williams also declared he would be keeping part of his Council salary a shift from an earlier promise to forego it. Yet Williams’s move could become a legal and political obstacle course for the freshman rep.

Williams represents the 11th Hampden District, which covers Bay, Hill-McKnight Six Corners and parts of adjacent neighborhoods including Pine Point and East Forest Park. As an at-large councilor he serves the entire city.

Williams’s decision was first reported by The Republican.

City political sources have said Williams did not want Lederman to take the seat. As the runner-up with the most votes in 2015’s Council election, Lederman has the right to fill at-large vacancy. That, perhaps, prompted Williams’s repeated, delays in announcing his intentions during and since.

“It’s not personal,” he insisted in an interview at City Hall Monday. 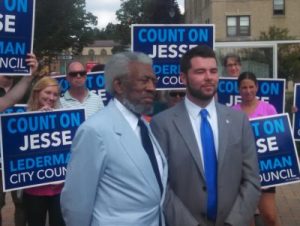 Putative Williams allies have been cool to Lederman. Point of View, a monthly newsmagazine geared toward Springfield’s African-American community, slammed Lederman—though not by name—as “simply unacceptable” and “too much into himself.”

Publisher Frederick Hurst, who owns the newsmagazine with his wife Marjorie, also owns property with Williams’s wife per state corporate records. Both Hursts have known Williams for years and both attended his swearing in last Wednesday. However, their presence was likely reportorial, too.

Williams claimed an “overwhelming” response from the community prompted his decision. At best public opinion was divided. Letters to the editor went both ways and The Republican’s editorial board urged Williams to give up City Hall and focus on the State House.

Keeping both seats is not unprecedented, but rare. Cambridge City Councilor Timothy Toomey continued to seek reelection to both until Michael Connolly unseated him in the legislature last year. Holyoke Rep Aaron Vega served out his Council term after election to the House in 2012. The most prominent example of former Lawrence Mayor William Lantigua’s attempt to serve as both rep and mayor. He resigned the former amid criticism.

Councilors, not voters fill vacancies in the Paper City. (WMassP&I)

Unlike Springfield, Holyoke does not fill vacancies with the next highest vote—the Council chooses a replacement. That smacks many Holyokers as undemocratic and played a role in Vega’s decision.

Williams’s plans do include one major shift, however.

Williams reversed a November promise to decline his Council salary while in the legislature. He will give some away to charity, but keep the rest to finance Council-related expenses. Why Williams did not consider this—after 21 years on the Council—when he made his earlier promise is unclear.

Williams makes $19,500 as a Councilor plus $62,547 as a state representative. A retired probation officer, he also receives an annual pension of $50,900 according to state records. As a state rep, he is also eligible for travel per diems to the State House.

The switch threatens to provoke critics of government and Democratic leadership in Beacon Hill. Richard Theroux, an Agawam Town Councilor, fled the 3rd Hampden House race last year after The Boston Herald targeted his pension and stipends from Agawam and a county retirement board. 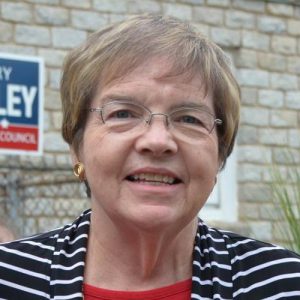 Salary and pension came up in Governors Councilor Mary Hurley’s campaign, but she had announced plans to give some away early on. (via Facebook/Hurley campaign)

Democrats have sought to avoid it as an issue even among themselves. Governor’s Councilor Mary Hurley promised last January as a candidate to direct a raise for councilors to a scholarship fund. Vega gave away his City Council salary to charity, but still it considered income for tax purposes.

Speaking to WMassP&I, Williams had not settled on a specific charity, listing several possibilities, but assured, “I’m going to publicize it.”

Williams may also face scrutiny under the state’s ethics laws. Individuals, including elected officials, cannot act contrary to the interests of their government employer, whether the state or a municipality. There are certain carveouts for state legislators, but the law may still compel Williams to abstain in Council Chambers or on Beacon Hill where his duties in the other is at issue.

Legislative aides with local municipal office encounter the problem of divided loyalty more often as the lawmaker exceptions do not apply. Such aides may be unable to ethically work on issues directly affecting their municipality. Still, these laws could apply to Williams in some situations.

To whom do you owe your duty? (WMassP&I)

As a Councilor, Williams is also an officer of a corporation—the City of Springfield—and actions for its financial benefit on Beacon Hill, where he is a state official, may create conflicts. As Springfield’s finances rely so heavily on state assistance, this could implicate either state or city budget votes.

This is a tricky area of law fraught with risks, especially since Williams municipal constituency is geographically larger than his state district. Moreover, Williams’s legislative staff, currently one aide, cannot work in furtherance of the representative’s Council duties.

“There will be stuff you can’t vote on,” he said, adding he expects “they,” apparently House leaders, to tell him what he can and cannot do.

City Council President Orlando Ramos kept Williams as chair of the Council’s State & Federal Relations Committee. That seemed self-evident given Williams’s election, but it may be self-defeating. Ethics advisories have stated problems may exist where legislators also serving as councilors or selectmen work on home rule petitions or other laws that affect their municipality spefically.

Speaking to reporters Monday, Ramos said he did not see a conflict and Williams told WMassP&I he did not ask and did not plan to ask the Ethics Commission for an advisory opinion. 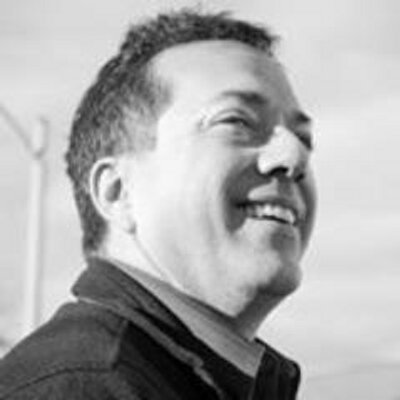 Another conflict Williams must navigate is political because he still represents the entire city in the Council. Provision of constituent services, particularly those involving the state, might step on the toes of other representatives. Vega, though an at-large councilor avoided this because his House district entirely and exclusively covers Holyoke.

Tough votes in the legislature can also lead to political conflicts. Vega, speaking to WMassP&I last fall, said controversial votes in Boston can “leave a bad state in people’s mouth” back home. Beacon Hill leaders advised Vega to “stay out of the local stuff and focus on the state rep stuff.”

That may ultimately be Williams’s path. While he flip-flopped on his salary, Williams has told others he intends to not seek reelection to the Council this year. This may be key to supporters who either might become candidates or have someone in mind for his at-large Council seat.

If Williams reneges on that promise, he could destabilize his coalition in the district, exposing himself to Toomey’s fate.