UPDATED 2/1/2017 3:15PM: For a correction. Senator Joseph Boncore, Democrat of Winthrop, is also a Millennial was overlooked in prior versions of this post.

Millennials have breached the gates and are flooding in! (WMassP&I)

BOSTON—Both chambers of the Massachusetts Legislature were sworn in Wednesday with the usual ceremony (and free lunch). Governor Charlie Baker did the honors, administering the oath to freshman and returning senators and representatives. Senate President Stanley Rosenberg and House Speaker Robert DeLeo, easily secured their colleagues’ confidence for another term.

November’s election also swept a clutch of Millennial representatives from all corners of the commonwealth onto Beacon Hill. In increasing numbers, the generation born in the 1980’s and early 90’s are moving into power in Boston and beyond. That presents incredible potential to have an impact on public policy in Massachusetts.

At least seven Millennials joined the House of Representatives Wednesday adding to the generation’s ranks already there. While the upper chamber’s batch of young senators has grown since 2014, it stayed level in 2016 despite the retirement of 35 year-old Benjamin Downing. Millennials lost no ground thanks to Truro Democrat Julian Cyr’s election as the Cape and Islands’ senator. 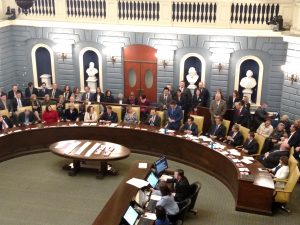 The Senate in session Wednesday (WMassP&I)

“People in my generation, in [Longmeadow Senator Eric Lesser’s] generation need to step up and lead and really be part of the conversation,” Cyr said in an interview shortly after his swearing in.

Cyr noted the challenging environment for young people in his district whose population skews older. As a tourist destination, it has high housing costs but few year-round well-paying jobs discouraging younger residents from staying.

Alongside him in the Senate are Joseph Boncore, elected in a special election last year, Lesser—whom Cyr has edged out as the youngest senator—and Republicans Ryan Fattman and Patrick O’Connor of Webster and Weymouth respectively. All replaced Baby Boomer Senators (Downing was replaced by Gen-Xer and fellow Pittsfield Democrat Adam Hinds).

There’s no precise definition for Millennials. However, a broad range includes those born between 1980 and 2000, but are of voting age.

In the House, virtually all 2016 growth was on the Democratic side. Still, Republican Millennials made gains in 2014. Both parties can boast geographic diversity among its younger legislators.

Rep. Juana Matias (via Linked In)

Even more diversity exists within the new class of Millennial legislators. A retirement in Boston’s Roxbury neighborhood opened the way for Chynah Tyler, 27, in a historically black-held seat. Up in Lawrence, Juana Matias did not wait for an open slot as many pols do only to find their youth is no longer a feature. Rather, she defeated incumbent Marcos Devers in the primary.

Representing a predominantly Latino, specifically Dominican, district and city with all the needs of an urban population, Matias said the election of Millennials “brings a different view of life” to the conversation.

“It speaks to the fact that Millennials do care,” she told WMassP&I after just finishing up a Spanish television interview. Perhaps more importantly, as younger Americans generally participate at lower rates than their elders—particularly in minority communities—the election of individuals like Matias could inspire other Millennials to participate.

Rep. Solomon Goldstein-Rose of Amherst is the 413’s newest Millennial legislator. (via Facebook/@solomonforrep)

Following Wednesday’s swearing in, roughly 14 percent of both caucuses in the House are Millennials.

But influence will take time. Power in the overwhelmingly Democratic House is heavily centralized and the new reps must develop relationships with leadership over time to influence the chamber’s policy. Moreover, the most vulnerable reps are conservative Democrats, granting them a degree of power compared to many Democrats elected this year, who track to the left.

A big learning curve in the Massachusetts House. (via malegislature.gov)

Among Republicans, influence somewhat follows adherence to the establishment line of the governor.

Nontheless, issues of universal concern may be the way the generation flexes its muscles to address urgent needs.

“Our generation in particular [is] facing some serious issues,” said Connolly, a Cambridge Democrat who unseated the incumbent—who is also a city councilor—in the September primary. He mentioned transportation and the cost of living referring to an “affordable housing emergency.”

Cyr, the Cape & Islands Senator, said existing affordable housing policy is “not a good fit for our needs.” Vacation homes and rentals dominate the landscape, but push up the costs for full-time residents. He called for affordability programs to include programs that apply to the Cape’s landscape and incentives to save for a mortgage down payment.

With another big review of the commonwealth’s education policy and funding inevitable, Matias said public education was important to both Millennial parents and, obviously, the next generation. As Lawrence’s school district is under state receivership, she had an eye toward what comes next. Underscoring the high teen pregnancy rate in cities like Lawrence, she said the state should require school districts to include effective sex education in their curricula.

The newcomers are not just identifying regional differences, but sharing them. Matias said she has spoken with her fellow freshman to develop the bigger pictures of issues like the opiate epidemic. Rural and suburban areas are seeing a spike in deaths, but drug selling itself is perhaps the dominant blight from drugs in cities.

“At the end of the day we can work together to find common ground,” she said.

In an era increasingly divided not just by party, but by experience this is essential.

Even as both parties build their youthful ranks, there is some intragenerational comity. Senators Lesser and Fattman are ideological opposites, but, each about the same age and with young families, enjoy a cordial relationship. They co-chair the Senate’s Millennials’ initiative.

“We value equity, fairness, justice,” Cyr said of Millennials like himself. “We have a real consensus on what American values are.”