McAuliffe Aims to Be a Face of Chicopee’s Future…

UPDATED 6:55PM: To reflect a correction. McAuliffe is 25, not 24, for clarity & grammar and to include additional quotes. 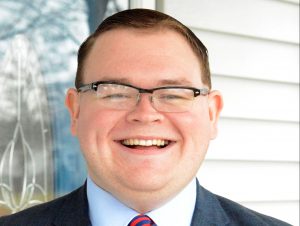 CHICOPEE—A deluge of candidates awaits a likely open at-large seat in Springfield and Holyoke preps for another mayoral smack down. Yet here in Chicopee, the second largest community in the 413, it could be a sleepy year. Few tough challenges await incumbents, including Mayor Richard Kos. Ward 4 is open following William Zaskey’s retirement, but the seat’s competitiveness is uncertain.

One race could prove different. Ward 1 Adam Lamontagne appears poised to relinquish his seat, setting up a battle between a familiar face and a rising figure in Chicopee politics. The latter, Joel McAuliffe, a state senate staffer and former Kos aide, has already turned in his paperwork, promising younger perspective at City Hall.

“I want to bring fresh ideas with a different perspective to the city council,” McAuliffe, 25, said. He added, “I appreciate and understand the job because I can do the job at a high level.”

McAuliffe, the oldest son of teenage parents, has lived most of his life in Chicopee. Beyond working for Kos and now Senator Eric Lesser, he was a staunch supporter of Hillary Clinton’s and hosted a radio show about the presidential contest. WMassP&I editor-in-chief Matt Szafranski was a frequent guest. 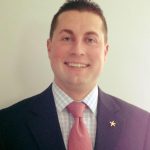 WMassP&I confirmed Lamontagne is pursuing a career with Chicopee’s police department. Though, he did not state when he would leave elected office, he likely cannot remain a councilor and become a cop under the city charter.

“I’ve always wanted to be a cop as a kid,” he said in a phone interview. “Now is my opportunity to do that. I’m really looking forward to that.”

That gives McAuliffe, who unsuccessfully sought an at-large school committee seat twice, an opening. Yet, Dino Brunetti, who held the seat for a decade until Lamontagne usurped him, has pulled papers, too. The 60 year-old Verizon landline engineering administrator is known to voters, setting up a contrast with a relative upstart, if one plugged into Chicopee affairs.

Neither the incumbent nor Kos, who is close to both, are taking sides. 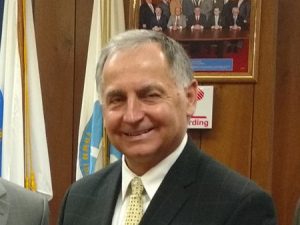 In an email, Kos said he is running for reelection, but staying out of the Ward 1 fray. “I had the opportunity to mentor Joel and know his love for the City,” Kos wrote in an email. “I also know that Dino Brunetti loves Chicopee and he was one of several Councilors who encouraged me to run in 2013.” Kos indicated he could work with either.

In his launch video released Saturday, McAuliffe highlights his biography—“the son of an Iraq War veteran”—and service in government.

“As a city, we must rethink our past to understand our future, so that we take advantage of the opportunities of a new age as a hub of new innovation,” McAuliffe says in a voiceover while chatting with residents onscreen.

During an interview at a local watering hole here, McAuliffe returned to those themes. He claimed the city led the pack once and needed to again. McAuliffe called for leveraging Westover and Chicopee Electric Light’s fiber-optic internet services for more economic development. Channeling his current boss, he urged a focus on high-tech manufacturing.

While Lesser did not endorse McAuliffe outright—though it may yet happen, he called him a “great friend and a hard worker.” In a statement to WMassP&I, Lesser said he has “seen first hand [McAuliffe’s] dedication and sincere belief in how public service can make a positive difference in people’s lives.”

Despite Chicopee’s political gyrations and the nonpartisan nature of its municipal elections, McAuliffe doesn’t fear partisanism seeping into the race.

Echoing New York’s Depression-era mayor Fiorello La Guardia, McAuliffe told a voter reluctant to sign the Democrat’s nomination paper, “There’s no Democratic or Republican way to pick up the trash.” He also pointed to his father, a Tea Party Republican, with whom he shares many values like hard-work and education.

Still Kos, also a Republican, if a liberal one, towers over McAuliffe’s take on the city.

“I’m running because I’ve been part of every decision made the last three years,” he asserted. “I know the issues inside and out.”

McAuliffe talked at length about the trust Kos put in him, something the mayor’s email seems to confirm. In discussing the detail of sewer rates and economic development, it’s clear McAuliffe was in the know in Kos’s office. He broken down the complexities of seemingly mundane things like controlling waste disposal costs without implementing a trash fee.

All this gives McAuliffe a perspective few others—except, as Kos noted in his email, Brunetti has his own ties, too. Still, McAuliffe will be arguing from a more technocratic perspective augmented by his knowledge of city and state government. 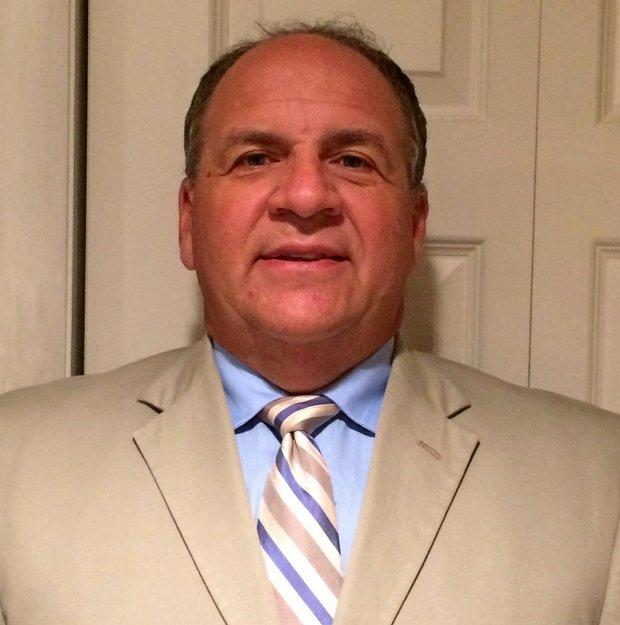 Brunetti, meanwhile, will try to argue a less political angle.

“I never played a political game,” he said in a phone interview. “Never got on a political machine.”

Brunetti said he and McAuliffe have talked about the race. They committed to keep it cordial and issues-oriented, “He told me, ‘I don’t want to have a dirty campaign, I want a clean campaign.’”

Similar issues are on their radars. High sewer rates—partly the consequence of a mandate to separate sewer lines and storm drains—burden homeowners. The city faces challenges as its dump reaches becomes full.

Brunetti and McAuliffe also echoed each other on ward issues. 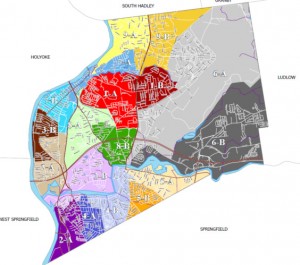 Chicopee’s ward 1’s two precincts are in red and maroon. Click for larger view  (via MA Sec. of State)

Ward 1 sits at about the geographic heart of the city. Running north from the Turnpike on-ramp between Memorial Drive and Montgomery Street, it mushrooms out into the edges of Willimansett and Westover Air Reserve Base. Having developed with the airport, it has a suburban character and lacks the multiple-family homes the city’s older industrial areas possess

Brunetti and McAuliffe both described quality of life issues like road maintenance and congestion. “I still get complaints about the high school traffic” three years after leaving office, Brunetti said.

While some Chicopee watchers say Lamontagne mastered constituent outreach, even the incumbent admits he and his colleagues’ differences have frustrated the delivery of some Ward 1 needs.

“We have our challenges,” Lamontagne said. “Sometimes your colleagues agree and sometimes they disagree.” 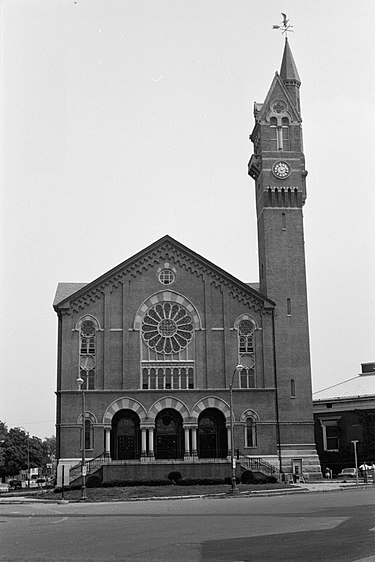 Chicopee City Hall in 1980 (via wikipedia)

Even though voters rejected Brunetti in 2013—and reaffirmed that in 2015—he offers a known quantity. He said he will go after voters he lost, expressing an eagerness to work with Kos.

McAuliffe acknowledges this dynamic, if implicitly, while considering his previous runs for office.

“When I first ran in 11 and 13, I was a wide-eyed teenager who believed we could do all these things but just didn’t do it,” he said. Comparing himself to Lesser, who worked for President Barack Obama, he added “I never wanted to leave home because I wanted to figure out how to help as quickly as possible.”

McAuliffe admits he had not planned to run for office now. Asked about ambition, he did not deny higher aspirations, but stayed on message.

“Whatever opportunities present themselves, you bet I’ll take advantage of it,” he said, “because it if helps Chicopee, I’m interested.”

Even as Ward 1 hurtles toward a generational battle,  the younger one’s seat at the table is at stake. Lamontagne, 30, will either be replaced by another Millennial or a Baby Boomer. So far no other young people have gotten into Chicopee elective office. Some do populate appointed boards and commissions, however.

“One of the things I had hoped to be able to do when I decided to run a second time was to inspire and provide real opportunities for young people to serve our City,” the mayor wrote in his email. “I’m proud that I have been able to do that so far—with Joel being a great example.”

Lamontagne, while encouraging his generation to seek and win office, said ultimately Millennial’s place in government was ultimately voters’ call.