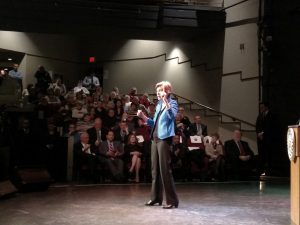 SPRINGFIELD—United States Senator Elizabeth Warren and her annual office hours returned Monday. For the first such event in the Trump era, organizers moved the event from the lobby of her Springfield office to City Stage next door. But the amphitheater setting complemented the town hall-style “office hours,” suggesting the change was as much by design as a surge in interest.

After an introduction by Longmeadow State Senator Eric Lesser and some brief remarks, Warren took questions. Touching on Donald Trump’s draconian budget, the student loan crisis, activism, Neil Gorsuch’s Supreme Court nomination and the environment, she hit on several issues on the minds of her local supporters.

“What alternative planet are they going to live on when they destroy this one,” she said talking about Environmental Protection Administration administrator Scott Pruitt. The former Oklahoma Attorney General routinely sided with the fossil fuel industry, parroting their talking points in official documents.

The event coincided with dueling hearings in Washington. Gorsuch’s confirmation hearings began in the Senate side and the House Intelligence Committee held its first public hearings on Russia’s attempt to influence the election. US intelligence agencies have concluded this was to help Trump win.

After wreaking havoc on Democrats during last year’s election, FBI Director James Comey was telling the GOP what it didn’t want to hear today. (via wikipedia)

In her denunciation of Trump’s nominee, Warren took aim at his likelihood to boost the Court’s existing pro-corporate bias.

“We’ve watched him do this job,” she said, referring to Gorsuch’s place on the Court of Appeals for the 10th Circuit. “In decision after decision when you get a corporation and a women”—or any other individual—“the corporation takes precedent.”

She cited the Hobby Lobby case, which came before Gorsuch while at the appellate level. His opinion said the craft store could exercise a religious belief and refuse to cover certain women’s healthcare in employee insurance plans.

“I believe we need a Supreme Court justice who believes in the rights of individuals,” Warren declared.

The conversation was wide-ranging and convivial. Warren seemingly relished the lecture hall setting. A former teacher and law professor, Warren, gesturing toward the back of the audience, said, “got to keep an eye on the back row!”

Glad to answer as many questions as possible during our office hours at CityStage in Springfield this morning.

Springfield City Council president Orlando Ramos moderated by calling out numbers attendees received upon arrival. As the questions came in, Warren moved comfortably around the stage, turning and engaging with questioners.

One person yelled out she was giving Warren permission to tell Senate Majority Leader Mitch McConnell to shut up. The Massachusetts senator playfully responded, “but first I have to warn him.”

A reference to the same episode—wherein McConnell silenced Warren during a Senate debate—came earlier during Lesser’s introduction when he said “she persisted” on behalf of her.

Great to introduce our fighter in the US Senate @SenWarren today! #ShePersisted pic.twitter.com/BWLd3UxfpX

She highlighted some areas where Democrat have had an impact like “Secretary of Labor” Andrew Puzder and Education Secretary Betsey DeVos. The label for Puzder, a fast-food magnate, was a sardonic. He withdrew amid a stream of controversy.

DeVos’ disastrous committee hearing did not stop her confirmation, but it needed the vice-president for a historic tiebreaker. Warren predicted she would become the most scrutinized education secretary in history.

On the spending plan Trump released last week, she said, “This budget just a bone cruncher for people.”

She slammed cuts to the Community Development Block Grant program, education and the National Institutes for Health. Medical research has been one of Warren’s top causes since her election.

“I’m sorry, don’t you understand it’s not just poor people who get cancer, it’s rich people, too?” she said. 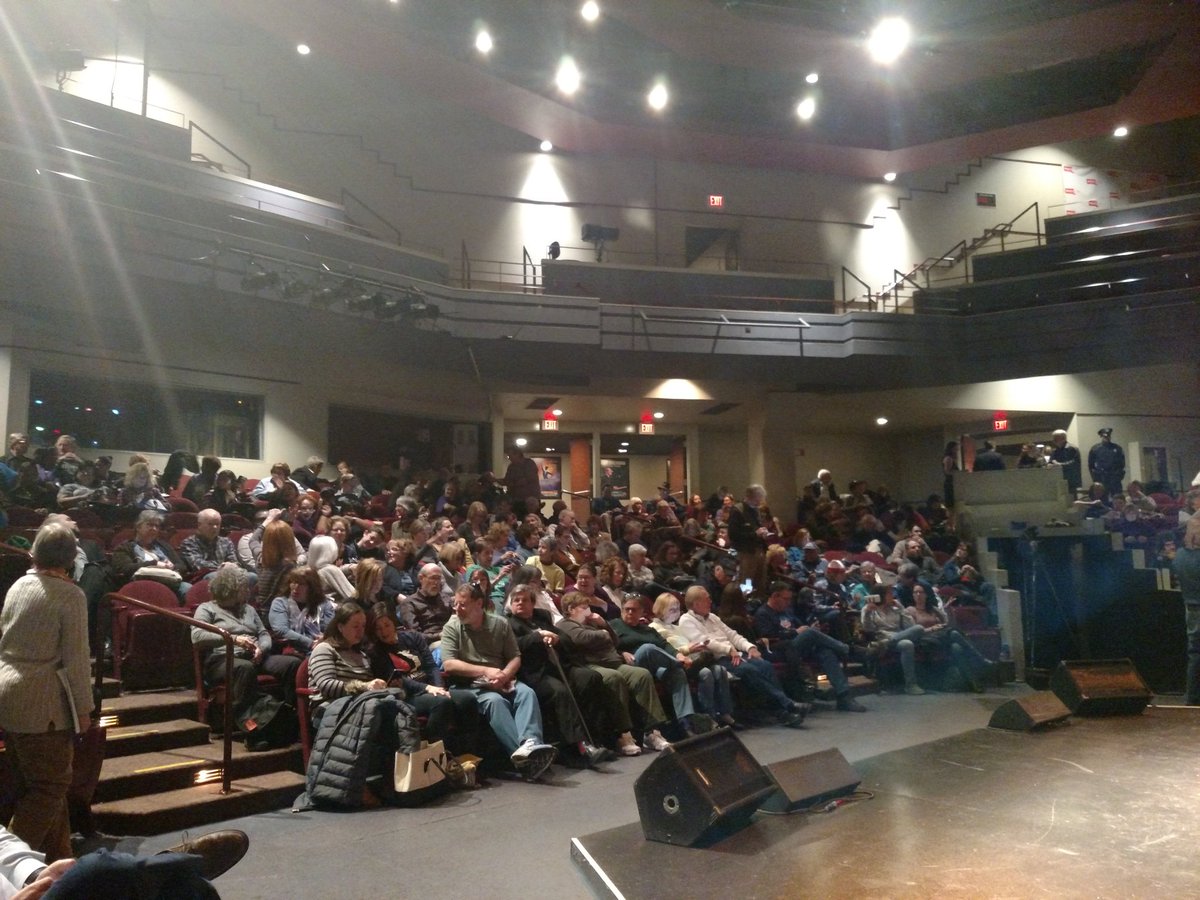 The crowd shortly before the program began on Monday (WMassP&I)

Springfield is friendly territory. Moreover, I-91 essentially funnels supporters in from indigo blue college towns to the north. Cheerful and supportive outbursts punctuated parts of the program. At City Stage, more conducive to Q&A than her office’s lobby, the event struck a contrast with rancorous town halls Republicans Reps and Senators have faced nationwide.

The format resembled a pep talk, at times. Liz Friedman, a Northampton activist, asked how supporters could help her in Washington and how they could push Governor Charlie Baker, a Republican, on key issues here.

After paying tribute to Senator Ed Markey and Springfield Congressman Richard Neal, Warren assured the calls and demonstrations made a difference.

“You have already changed the world,” she said citing the women’s march. Some have called it the biggest nationwide demonstrations in history. She urged folks to persevere and reach out to friends and family in other states to maintain pressure on elected leaders.

Warren, who is up for reelection next year, touched on a few issues of local resonance, too. Last week she threw her support behind expanding rail service among Springfield, Worcester and Boston.

“Springfield should be the crossroads of the region” again,” she said, invoking the planned New Haven commuter service, too.

On student finances, Warren condemned the federal government for earning a profit on student loans at borrowers’ expense. The issue came up after an audience question on students finances. However, it was timely for another participant. Lesser, the Longmeadow State Senator, recently introduced a student’s financial bill of rights on Beacon Hill. 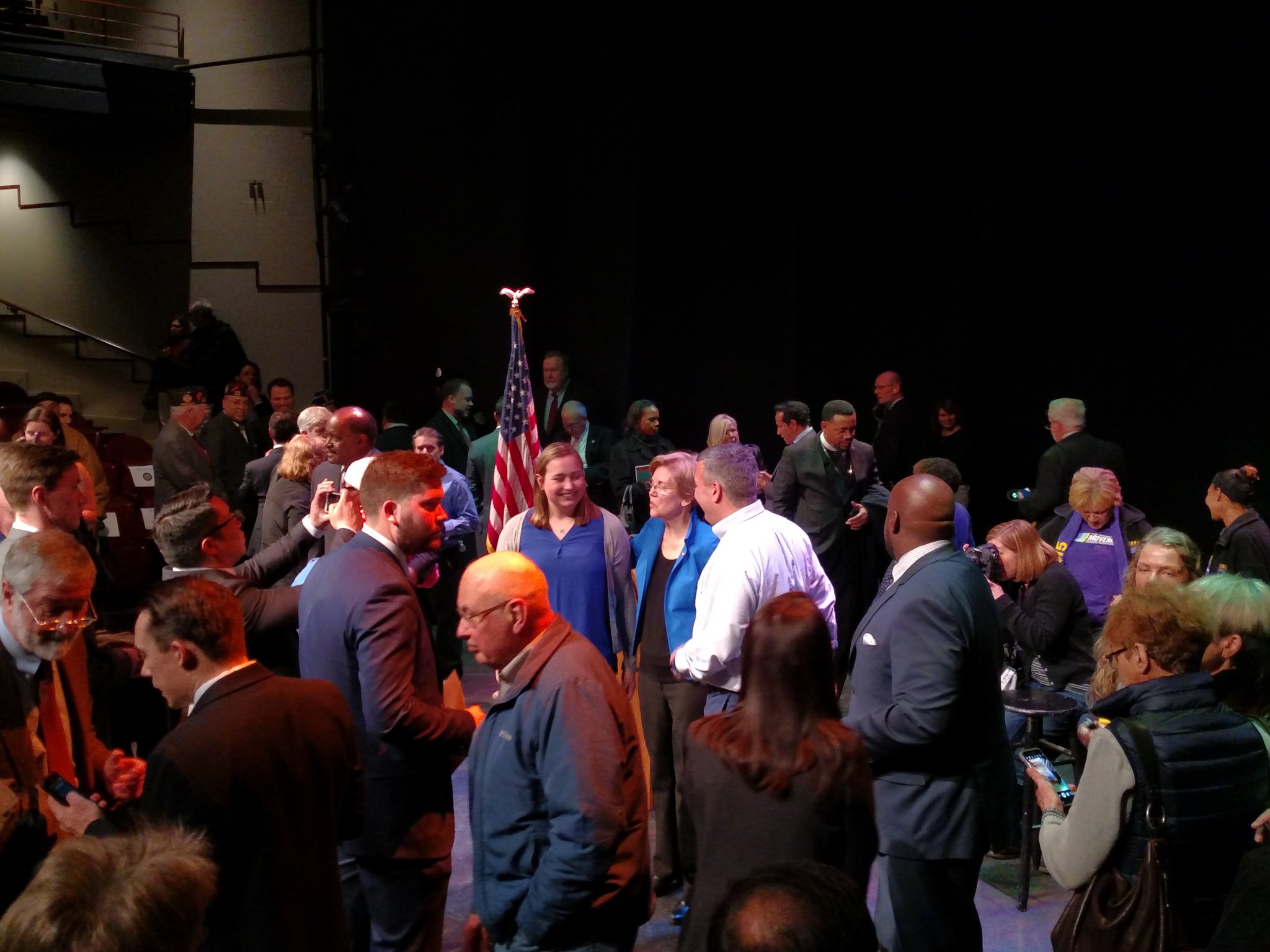 Sen. Warren meeting with constituents after the event. (WMassP&I)

She closed with a reassuring message. Warren called the current climate a test for the nation’s character, but one America would ultimately pass.

One aspect of Monday’s event was not new ahead of 2018. Warren stayed to speak and take pictures with everybody. She has done that at her Springfield office hours each year since her election.